When Marine Corps veteran David Couper took over as chief of the Madison, Wisconsin police department in 1972, he stepped into the middle of a virtual war between police and antiwar protestors – and quickly de-escalated the situation, turning one of the nation’s most violent police departments into one of the most peaceful and restrained. (Unfortunately “the times they are a changin’ back” as Madison has recently seen apparently abusive police killings of civilians Paul Heenan and Tony Robinson, and has become a lighting rod for protests.)

I’m not a big fan of police, but David Couper (like Frank Serpico) has been a hero of mine since I was a teenager. He embodies “earned authority” as opposed to the abusive, psychopathic authority that is unfortunately becoming the norm. It’s an honor to interview the man I would nominate to head a Commission on Police Reform. 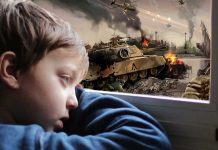 Speaking Truth To Empire: Never Ending U.S. Military Bases All Over The World