Benjamin Netanyahu is in big trouble again.[1] He seems to realize that his wicked actions and covert deceptions have made him a lot of enemies over the past few years, and now he is looking for a friend. To his chagrin, the West has finally made a deal with Iran. As E. Michael Jones has recently put it,

“After 36 years of failure, the American empire now seems determined to lure Iran back into the fold by proffering carrots rather than wielding sticks.”[2]

Iran has withstood the American empire all those years because Iranian leaders understood the deceptive nature of that Zionist empire. Iran has acted with reason over the past decade and has even offered legitimate path to peace and economic exchange,[3] but since the Neocons (with their headquarters in Jerusalem[4]) wanted to destabilize the country, no serious progress was possible during the Bush administration. Iranian leaders perceptively realized that the Zionist regime was the cause of this log jam. For example, The Ayatollah Khomeini declared back in 1980 that America:

“exploits the oppressed people of the world by means of the large-scale propaganda campaigns that are coordinated for it by international Zionism.”[5]

“America is the number-one enemy of the deprived and oppressed people of the world. There is no crime America will not commit in order to maintain its political, economic, cultural, and military domination of those parts of the world where it predominates…

“By means of its hidden and treacherous agents, it sucks the blood of the defenseless people as if it alone, together with its satellites, had the right to live in this world. Iran has tried to sever all its relations with this Great Satan and it is for this reason that it now finds wars imposed upon it.”[6]

Jones says that “Khomeini was here referring to Iraq, which had already launched a full-scale attack on Iran, as the proxy of America and Israel.”[7]

Khomeini’s central thesis that America “exploits the oppressed people of the world by means of the large-scale propaganda campaigns that are coordinated for it by international Zionism” is not in dispute at all. A classic proof of this is the Iraq and Afghanistan wars, which we have said repeatedly was unleashed by the Neoconservatives. To cite again Thomas Friedman, the war in Iraq

“was disseminated by a small group of 25 or 30 neoconservatives, almost all of them Jewish, almost all of them intellectuals (a partial list: Richard Perle, Paul Wolfowitz, Douglas Feith, William Kristol, Eliot Abrams, Charles Krauthammer), people who are mutual friends and cultivate one another and are convinced that political ideas are a major driving force of history.”[8]

The wars in Iraq and Afghanistan sent a six-trillion dollar figure to the American people and caused astronomical death and misery in the Middle East.

But history has taken a dramatic turn, and it is no longer in Netanyahu’s favor. The American empire seems to realize that the best way to move forward is to at least come to peaceful resolution with Iran. Nightmare for Netanyahu! He is furious again because he probably will not get blood and dead bodies on a massive scale anymore. The Associated Press reports that the deal is “an agonizing dilemma” for Netanyahu. The Neocons are all up in flame saying that the public should revolt against the deal.[9]

Fire-breathing dragon John Podhoretz has recently written an article entitled, “Iran Deal: The Right to Despair.”[10] Daniel Greenfield of the Neocon flagship FrontPage Magazine has said that it is “time to call Obama and Kerry what they are: traitors.”[11] In the same vein, Bill Kristol has entitled his recent article “A Very Good Deal—for Iran.” Kristol is certainly angry:

“We have a deal. It’s a deal worse than even we imagined possible. It’s a deal that gives the Iranian regime $140b in return for … effectively nothing: no dismantlement of Iran’s nuclear program, no anytime/anywhere inspections, no curbs on Iran’s ballistic missile program, no maintenance of the arms embargo, no halt to Iran’s sponsorship of terror.

Marc Rubio, who is now running for president and a puppet of the Zionist system, said that “Iran will likely use this agreement—and any that follows that does not require any real concessions—to obtain a nuclear weapons capability.”

What we can safely say here is that Netanyahu, despite the fact that he tried to manipulate America, has failed miserably when it came to stopping the Obama administration from making a deal with Iran. Moreover, Netanyahu has irritated some politicians in Israel.

“Criticism of Netanyahu’s handling of the Iranian issue has grown over the past two days. Yair Lapid, head of the Yesh Atid party, denounced Netanyahu’s diplomatic campaign as a ‘colossal failure.’”[13]

Lapid declared, “He [Netanyahu] should resign, because if you promise for years that only you can prevent this deal and then it’s signed, you’re responsible.”[14]

“That criticism was echoed by other senior opposition figures, including the Zionist Union’s Isaac Herzog, who – while opposing the deal – criticised Netanyahu’s alienation of Obama’s White House. Shelly Yachimovich, a Zionist Union member of the Knesset, said Netanyahu should ‘immediately cease and desist from confronting the Americans.’

“She said: ‘Now that this dangerous, damaging agreement with Iran has become a fait accompli, Netanyahu must stop disseminating prophecies of doom, come to his senses and regroup, in order to improve Israel’s position and defend its interests when the agreement is implemented.’”[15]

The Obama administration seemed to have distanced itself from Netanyahu. In fact, the administration ignored him completely when it came to making a legitimate deal with Iran.

You remember when Netanyahu kept saying that a deal with Iran was bad? He is still mad about the deal.[16] So, the man in Tel Aviv is sad.[17] But he seems to have found one friend just a few days before the West made the deal. He found a friend in Mariah Carey—but we all know that it is just publicity stunt. The Jewish Daily Forward tells us that “Bibi and Mariah Carey belong together (at dinner).”[18]

“Mariah Carey’s vision of love led her and new billionaire boyfriend James Packer to Israel last week, along with her twins, Monroe and Moroccan. And then a hero came along! Benjamin Netanyahu invited Packer and Carey to dinner at his home in Jerusalem.

“Even Sara Netanyahu gave the dinner her all (I mean, look at that bejeweled dress collar!). According to Bibi’s Facebook page, the dinner was filled with emotions as they discussed Israel’s mandatory draft and Netanyahu’s two boys.”[19]

“Last night, my wife Sara and I hosted Mariah Carey and her boyfriend James Parker for dinner. Carey was very excited to be in Israel for her first-ever visit and said that seeing the Western Wall was the highlight of her tour. Carey told us how she fell in love with Israel’s beautiful scenery and noted how much the landscapes in the south inspired her.

“Sara and I spoke about how boys and girls in Israel are drafted into the army at age 18, like our sons Yair and Avner were. Carey was greatly interested in this and asked us about the concern and the pride that are well known to every mother and father in Israel. Carey revealed that she had waited for years to visit Israel. I hope that she will return again soon for another visit Mariah, thank you for coming.”[20]

Perhaps Carey should call the Obama administration and ask them what they actually think of Benjamin Netanyahu. I can image Carey calling the administration saying,

“Hey, I’d like to know more about the Prime Minister in Israel. I just had dinner with him and he was very nice to me, giving me great accolades and veneration. Good guy or bad guy?”

I can also imagine the administration saying,

“Oh, that guy? That chickenshit?[21] He said he is ‘under attack for defending Israel,’[22] but we said he is a ‘chickenshit’ for slaughtering and killing innocent Palestinians and starving other innocent children to death. If you want proof of this, my dear Carey, listen to Israeli Zionist historian Benny Morris, who bragged that

“Furthermore, you remember how Mr. ‘Chickenshit’ went crazy when three Israelis were allegedly captured and killed? You remembered how he was blaming it on Hamas?[24] Well, ask him whatever happened to the 15,000 innocent men, women and children who lost their precious lives and future due to the Israeli machination in the region. The answer may surprise.’

“Mrs. Carey, if that is not enough, pick up scholarly books such as Norman Finkelstein’s Method and Madness: The Hidden Story of Israel’s Assault on Gaza, Ilan Pappe’s The Ethnic Cleansing of Palestine, John J. Mearsheimer and Stephen M. Walt’s The Israel Lobby and U.S. Foreign Policy, etc.

“Mrs. Carey, we haven’t changed our position on the ‘chickenshit’ thing. Don’t mingle with this man, for even the Mossad has asserted that he is crazy. In fact, this man is almost certainly a psychopath who deserves to be in a padded cell forever. That would help humanity a great deal.

“Mrs. Carey, if you are still struggling with this issue, ask your colleague Rihanna, who tweeted last year that Palestine needs to be free. A few moments later, Rihanna, as TMZ put it, ‘had a change of heart,’ because saying things like that means that she would be unable to sell records. She later reposted, ‘Let’s pray for peace and a swift end to the Israeli-Palestinian Conflict! Is there any hope?…’

“Mrs. Carey, do you think you can answer Rihanna’s question? If not, we can help you. You can examine our thesis, which is to say that the mad man in Tel Aviv is still a ‘Chickenshit.’ Why do you think we ignored him while we were working with Iran? Don’t let this man woo you into his essentially Talmudic manipulation.

“Mrs. Carey, we have been working with him for years, and we know his Talmudic tricks by now. You know what he said a few years ago? He said that ‘I know what America is. America is a thing you can move very easily, move it in the right direction. They won’t get in their way.’[25]

“Mrs. Carey, you are an American, and this man wants to easily move you. Don’t let that happen, and we would suggest that you stay away from him as much as possible. If not, rest assure that you will be his next victim.”

[5] Jones, “The Great Satan and Me: Reflections on Iran and Postmodernism’s Faustian Pact,” Culture Wars, July 2015

[22] Quoted in Peter Beaumont, “Netanyahu insists he is ‘under attack for defending Israel’ after remarks from US official,” Guardian, October 29, 2014.

Biography
Jonas E. Alexis
Jonas E. Alexis has degrees in mathematics and philosophy. He studied education at the graduate level. His main interests include U.S. foreign policy, history of Israel/Palestine conflict, and the history of ideas. He is the author of the new book Zionism vs. the West: How Talmudic Ideology is Undermining Western Culture. He teaches mathematics in South Korea.
[email protected] 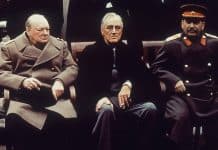