Imagine a million Muslims demanding 9/11 truth and justice in the heart of Washington DC.

Yesterday it happened. Sort of.

The Justice or Else rally on the steps of the nation’s capitol may not have drawn a full million – but it was massive, clearly the third-biggest assembly of (mainly) African-Americans in history, after the 1963 March on Washington and the original Million Man March of October 10th, 1995.

It may not have been all Muslims – but it was organized by the Nation of Islam, America’s most powerful, most courageous and best-organized Muslim group.

And it wasn’t just focused on 9/11 – but the call for “Justice or Else” did include 9/11 justice, meaning the indictment and conviction of the real perpetrators of the worst crime ever committed on American soil, along with restitution to the victims: beginning with the more than ten million Muslims murdered, injured, robbed or displaced by the War on Islam triggered by the neoconservative coup d’état of September 11th, 2001. (The Constitution, economy, and sanity of the USA might also be considered 9/11 victims.)

The slogan “justice or else” scared certain people. But why would anyone be afraid of justice? Do they know themselves to be unjust?

America’s Zionist-dominated corporate media, one of the world’s worst forces of injustice, once again disgraced itself by censoring the 9/11 truth component of the event, and collaborating with authorities to minimize crowd estimates and impact. CNN reported the crowd size as “thousands.” But the correct figure must have been in the hundreds of thousands. (The 1995 Million Man March was likewise “officially underestimated” by the Capitol Police and the media.)

So what, exactly, does “Justice or Else” mean?

The press conference announcing the event listed a number of issues including Black Lives Matter, access to health care, employment, and others…including 9/11 truth.

Nation of Islam leader Louis Farrakhan’s speech was a clarion call to stand up and put our lives on the line for justice: “What good is life under tyranny? I am willing to do whatever it takes to bring change…I tell the CIA and IRS to go to hell. Fear only God.

“If we go home and go back to doing whatever we were doing before we got here, this is vanity.

“The demand for justice demands selflessness, integrity, and the willingness to sacrifice our lives.

“This thing has reached a point of explosion. A volcanic eruption is coming.

“America has nearly reached its time for divine judgment. Today is that great and dreadful day. It is a great day for the righteous. And it is a dreadful day for the wicked.

“Justice for Pharaoh is not the same as justice for the Children of Israel. JUSTICE IS FOR THE OPPRESSED.

“America, you have a chance to stop the judgment, or delay it. But it’s a very narrow window of opportunity.”

Farrakhan ridiculed the propaganda lies designed to scare people away from Justice or Else:

“When I asked for 10,000 fearless men (willing to ‘kill those who are killing us’) they said I was asking for the killing of white people. I didn’t say that. I’m not crazy! I said ‘they (the killers) deserve the justice of God.’

“The rogue policemen say they want to be assigned to the black community because ‘that’s where the fun is.’

“Your days of having fun are about to come to an end!

Farrakhan has been labeled “anti-Semitic” by the mainstream media because he opposes the crimes of Zionism and talks openly about the power of the organized Jewish community in the United States…including the obvious but unspeakable fact that 9/11 was a neocon-Zionist coup d’état designed to launch a 100-years-war-on-Islam-for-Israel.

Check out the Times of Israel‘s hysterical reaction to Farrakhan’s truth-speaking:

The Times of Israel makes no attempt to refute any of the facts cite by Louis Farrakhan. It simply calls them “needless to say false.” But they are true and copiously documented.

Someone is lying here, and it isn’t Louis Farrakhan.

Farrakhan is not just right about what happened on 9/11; he is also right about how we should react: By demanding “justice or else” with full willingness and whole-hearted commitment to becoming an instrument of God’s vengeance on the wicked.

“What good is it to live under tyranny?”

That is the rhetorical question – a re-statement of Nathan Hale’s last words – that more and more Americans will be asking as the full scope of their leaders’ betrayal becomes increasingly evident and undeniable. 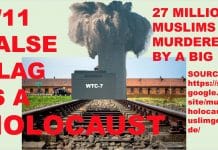 27 million Muslims killed due to US war on terror

NEO – “The Russians are Coming”