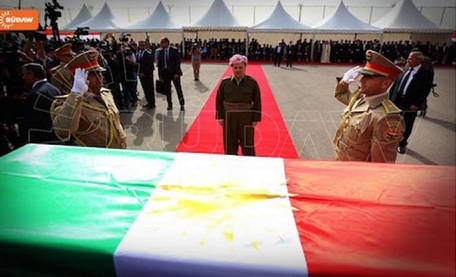 …by Paul Iddon  for Rudlaw, Erbil
–

In his New Year’s speech Kurdistan Region President Masoud Barzani tackled the most pressing issues affecting the region and its people, namely the fight against Islamic State (ISIS), the enormous influx of nearly two million refugees into the region, the tough economic situation and the political impasse.

Acknowledging the hard times the region has had to endure he promised Iraq’s Kurds that a bright future is ahead and that steps are being taken to solve these various issues.

Barzani’s Kurdistan Democratic Party (KDP) has reportedly been putting out feelers in recent weeks to other Kurdish parties in a bid to find common ground. The main topic for discussion has been the reintroduction of the independence referendum to be held this year.

This comes as ISIS is suffering increased territorial setbacks and the liberation of Mosul seems likely to be in the cards in the coming years. It also comes as Erbil has consolidated control over a lengthy front-line against ISIS which may form the basis for a demarcation line (along which trenches and other defensive barriers have been and continue to be established) which over time will become its international border.

Peshmerga participation in the liberation of Mosul, likely in tandem with the armed group of Sunni volunteers from Nineveh, could also give them the upper hand in resolving so-called territorial disputes with Nineveh.

Holding an independence referendum in 2016 would also have great symbolic value for the Kurds. May 2016 is the centennial of the Sykes-Picot agreement which ISIS symbolically dismantled in the summer of 2014. That agreement greatly disadvantaged the Kurds since it didn’t give them a state of their own. That historical injustice may soon be rectified in the Kurdistan Region as it assists multinational efforts to do away with the tyrannical Islamic State.

Since Barzani forwarded the idea of a referendum in the summer of 2014, but consequently delayed it when ISIS attempted to destroy the Kurdistan Region, he has stressed to the regional powers around it that it does not seek to interfere in their internal affairs and would strive to be a cordial non-threatening neighbor with all of them. They have clearly played their cards very shrewdly.

They didn’t seek to break from Iraq immediately after the overthrow of Saddam Hussein’s regime in 2003, shortly after which the Iraqi military was dismantled and was in no position to threaten Erbil. Instead Erbil modestly sought to become the Scotland of a united Iraq. Since then it has established friendly relations with Turkey, which was initially opposed to even autonomy for that region in 2003.

In a notable 180 degree turnaround Ankara today would likely tolerate an independent Kurdistan Region since it knows it would not pose any threat to them. Given that Ankara would likely support increased autonomy for the Sunnis of Nineveh Province it would possibly even acquiesce to a Kurdistan nation-state which would include Kirkuk, a city of great cultural significance and importance to Kurds, since it trusts the Kurds and the Sunni Arabs of Iraq much more than it does Baghdad.

Also in his address Barzani expressed his willingness to step down after the referendum and by the 2017 deadline set earlier this year when he extended his presidential term by two years. This is an interesting gesture and may give us some insight into his life goal, achieving independence for the region. He doubtlessly sees a historic juncture and opportunity and himself as the one most fit to bring it about.

If Kurdistan becomes independent by 2017 he will have achieved his life’s goal and will likely hang up his hat leaving governance to others selected by the electorate. Not unlike how America’s first president and founding father George Washington relinquished power following the American Revolutionary War in recognition that America would survive and thrive as a republic.

Or how the British people rallied around Winston Churchill during the Second World War but immediately voted him out of office when the threat posed by Nazi Germany was eliminated. Getting Kurdistan to independence is Barzani’s calling and what he has dedicated his life to achieving.

If he is successful and the referendum is held later this year and the majority of people vote for independence there will likely be a, possibly quite tense, settling in period before the region comes to terms with the reality of an independent Kurdistan. Shia militias backed by Iran have contested Erbil’s claim over Kirkuk threatening to intervene there against the Kurds and Iran itself is opposed to independence in that region.

They may begrudgingly accept it over time after recognizing that such an entity is no threat to them nor their interests and that friendly relations would be much more productive than antagonistic ones. Limited pressure from the outside and not being constrained in anyway by Baghdad would likely lead to more focus on domestic issues in Kurdistan and pave the way for greater political reforms and the establishment of a more transparent system.

Barzani has admitted that the current system is far from perfect, but he is taking solid steps to spearhead a status quo whereby less external constraints will be placed on Kurdistan and its people will have greater opportunities to spearhead a more transparent system and determine their own destiny.

Paul Iddon is a Rudaw reporter based in Erbil, Kurdistan Region.