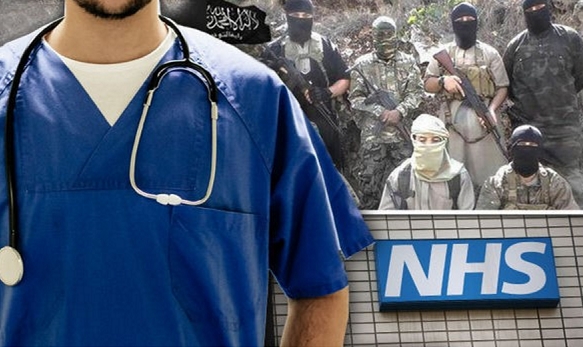 Editor’s note:  “And they worry about Syrian refugees…”
British doctors who are currently helping save the lives of ISIS terrorists injured by allied bombings are expected to return to the UK and work in the NHS.

The numbers of UK-born medics being recruited to vile terrorist cause is so worrying that British officials have been sent to Sudan in a desperate attempt to stop the flow.

The Foreign Office understands that the ISIS – also known as Daesh – are urgently seeking more foreign medics to help at its hospitals in Syria.

ISIS have already persuaded doctors from Australia and nearly 20 from Britain to join their makeshift health ministry.

British officials are now coordinating efforts to prevent more Britons from joining the terrorist health service by sending a delegation to Sudan.

Many of those who have already joined up with ISIS include at least 17 British doctors who were studying at Sudan’s University of Medical Sciences and Technology (UMST).

Parents had sent their children to Sudan to study medicine to reconnect with their African before returning to work as doctors in the NHS.

Families of the doctors concerned have revealed that a second group of five Britons have now joined up with members of an earlier group who travelled across the ISIS border in March.

Both groups were believed to be recruited by Mohammed Fakhri, a 25-year-old from Middlesbrough who studied medicine but styles himself as the recruiter of British medics for ISIS.

Fakhri is a British Palestinian who grew up in north-east England with his two older brothers. His father worked as an NHS doctor on Teesside.

Some appear to be stationed at a medical faculty next to the Raqqa National hospital while others have been dispatched close to Aleppo as well as Menbij’s National hospital, 12 miles from the Turkish border.

Despite their relative success in luring young foreign doctors to Syria – Australian, Libyan and Saudi doctors have all travelled to join the militants – the terror group is urgently requesting more.

Fakhri, thought to be in the ISIS stronghold of Raqqa, has published essays on the need for more medics during his time with the terror groups, Express reported.