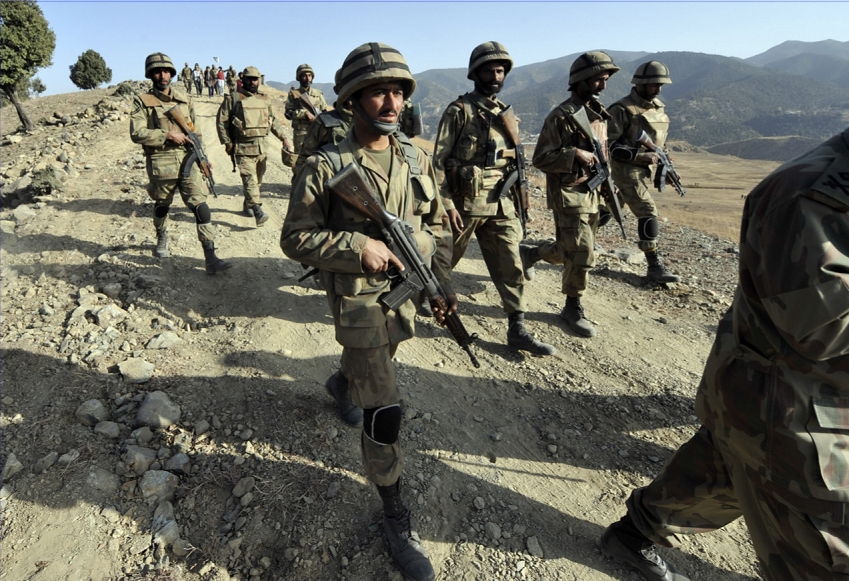 Present ‘different war’ is simply a clash of wills between two entities. Military thinkers agree that although the physical force will determine the type and scale of war, yet it is the will to fight or moral force which determines the outcome of war.

Clausewitz puts it this way, “One might say that the physical force seems little more than the wooden hilt, while moral factors are the precious metal, the real weapon.”

In his book, “Fighting Power: German and U.S. Army Performance, 1939-1945″, Creveld identifies the elements of moral force, whom he calls “fighting power, the willingness to fight and the readiness, if necessary, to die.” The greater these elements, the less vulnerable an armed force will be to ‘demoralization’. Quite opposite to ‘demoralization’, moral force, then, is the crucial factor in determining the combat power of any belligerent.

In this regard, more than 14 years have passed and the US-led NATO forces have been facing defeatism in Afghanistan in their longest war of history. The ambush attacks on their military installations and personnel by the Afghan freedom fighters have continued, particularly, targeting American bases, check posts and armed persons. While, the US-led troopers and their vehicles are equipped with sophisticated weaponry and modern technology, but they have badly failed in crushing the stiff resistance of the Afghan Taliban.

Likewise, in case of Iraq, the US-led forces occupied the country in 2003. When Iraqis started a war of liberation, Anglo-American forces became helpless before the stiff resistance of the freedom fighters. In that respect, the US President George. W. Bush had repeatedly said that Iraq is the main battleground of the ‘different war’ against the militants, and he would not withdraw the forces. However, US faced a humiliated defeat in that country.

In fact, despite their qualitative and numerical superiority over Iraqis (During occupation) and Afghans who are well-equipped with the elements of moral force, and have been showing unmatched courage by sacrificing their lives, the US-led forces have been demoralized.

We can note the same moral force or spirit of sacrificing their own lives in Pakistan’s armed forces, during the successful military operation, “Zarb-e-Azb”, which compelled the Indian-supported insurgents of the Tehreek-e-Taliban Pakistan (TTP) to retreat from North Waziristan Agency and other tribal areas. The jets of Pakistan Air Force have bombed militants’ hideouts in North Waziristan, and killed thousands of insurgents including foreign militants, while Pak Army has also killed several terrorists through ground offensive, and many of them surrendered before the army. And during street to street fighting, without bothering for their lives, and by air-dropping commandos at the risky places, Pak army made a great headway in disrupting the Taliban supply routes and links. While, there is a significant decline in motivation of suicide bombers, because most of the TTP Taliban have either been killed or fled their areas—they have been demoralized. What the US-led NATO forces could not do in the last 14 years in Afghanistan, Pakistan’s armed forces did within 14 months, while, geographically, the North Waziristan is the largest Agency and has the same topography like Afghanistan. It is also mentionable that unlike the American CIA which is part of the US global war on terror, Pakistan’s primary intelligence agency ISI captured several terrorists in Pakistan’s various regions, including suicide-jackets and weapons—thus thwarted their subversive acts.

Displaying moral courage like Pakistan’s armed forces, within three months, the Russian-led coalition of Iran, Iraq, the Syrian army-the National Defense Forces (NDF) and Lebanon-based Hezbollah have broken the backbone of the US-CIA-backed ISIS terrorists, Al-Qaeda’s Al-Nusra Front, the rebels and the mercenaries who have been fighting against the Syrian President Bashar al-Assad’s government and against the current Iraqi regime as part of America’s double game (Of regime change). In this context, it is owing to the high moral force that Russian-led combatants have destroyed the strongholds, supply lines and installations of the US-led entities. Besides killing several commanders of the CIA-assisted militants, they have shattered the command and control system of the ISIS and their affiliated terrorist outfits. These demoralized militants have fled most of the areas in Syria and Iraq, which have been recaptured by the NDF and Iraqi military which is well-motivated with the fighting spirit of audacity and boldness. In this regard, recently Iraqi forces have defeated the ISIS terrorists and liberated the city of Ramadi which was occupied by the group in 2014. Now, without caring for their lives, Russia-led forces are successfully achieving their objectives.

Here question arises, as to why unlike the Russia-led combatants, the US-led forces have been demoralized. In this connection, it is important to know that in every kind of war, the victory or defeat depends upon the soldiers who know that for whom they are fighting for, and for what cause.

In this context, Russian President Putin has pointed out that he was exposing the secret designs of the US global war on terror—New World Order agents, their collaboration with the Zionist-led regime in America and Israel including fake war against ISIS. Regarding NATO countries, Putin also clarified by saying that he is attacking the New World Order, “not because he wants to establish some kind of super-power entity in the Western world, but because the New World Order is imposing an irrational, irresponsible and unlivable ideology upon much of the West.”

The people of the Russian Federation are in unity with the Russian forces, which is the main reason behind their great courage. Similar is true in case of the Syria’s NDF and Iraq-Iran military entities.

On the other side, America-led forces know that they are fighting for the interests of the Zionist Jews and Israel. Particularly, the US military personnel are well-aware of the facts that they have been sent abroad—Afghanistan, Syria and elsewhere in the world to maintain the supremacy of Israel, instead of protecting America whose citizens have been facing multi-faceted crises due to the prolonged phony war on terror. It is the major factor which have demoralized the US forces.

Obama’s dual policy and contradictory approach have also demoralized the US-led forces. In this respect, earlier, he had ordered the Defense Department to abandon the goal of training the Syrian rebels, after the failure of the US-supported rebels to topple Assad’s government, but, afterwards, he decided to send 50 Special Forces to Syria to help in eliminating the ISIS terrorists. Similarly, he agreed to keep the Syrian President Assad in power, but, later on, he backed out from his statement and remarked that the Assad would have to go. Then, again, he is favouring the Vienna meeting where the US Secretary of State John Kerry has agreed to maintain Assad in power. Meanwhile, ordinary Americans have been criticizing the double game of President Obama, military establishment and the US useless proxy wars which are being waged for the interests of Israel, at the cost of American tax-payers.

While comparing factors of moral force and ‘demoralization’ in connection with the combatants of this ‘different conflict’, it is also of particular attention that despite the use of every possible technique of state terrorism, the well-equipped Israeli and Indian security forces have, totally, failed in suppressing the wars of liberation in the occupied territories of the Palestine and Kashmir where freedom fishers’ resistance continues unabated.

‘Demoralization’ of the US-backed forces in Afghanistan, Syria, controlled territories of the Palestine etc. have resulted into their frustration and depression. Hence, they are killing the innocent persons through special military operations and aerial bombardment. Likewise, the US-assisted ISIS terrorists and their affiliated militant groups have also been massacring the innocent people, including their own warriors who have vacated the regions in Syria and Iraq. Many demoralized ISIS militants have deserted their comrades. They have also lost the support of local Muslims who have come to know that these brutal militants are distorting the image of Islam, and are misinterpreting Jihad which does not permit the any sort of terrorism. Moreover, in frustration, US have so far killed several soldiers of its own army and those of Afghan army in the friendly fire incidents, especially in Afghanistan.

Without any doubt, we can conclude that the US-led forces and the ISIS terrorists have been demoralized in this ‘different war’, as they are fighting for the supremacy of Israel in the entire world.