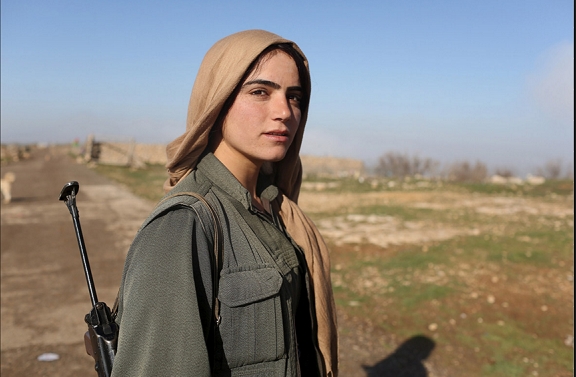 Kurdistan, the partially self-governing region of Iraq, the one fighting ISIS so bravely is, as it turns out, very much a part of ISIS. ISIS couldn’t survive without the Kurds, the primary source of ISIS oil, their business partners, their transportation hub and the real go-between for their vast financial dealings with the Erdogan clan and Turkish mafia.

All the oil stolen from Iraq is trucked through Kurdish territory, much of it directly through Erbil, the Kurdish regional capitol, driven past hotels filled with American, German and Korean businessmen, driven on public highways.

The trucks filled with oil come from ISIS and Kurdish regions not under direct Baghdad control. The routes for most of the oil take it on Kurdish controlled roads into ISIS territory and back out again, much of it right past the new Turkish base north of Mosul, back into the Kurdish roads of Duhoc and past the peaceful Kurdish city of Zakho.

On Christmas morning, Russia went public with detailed video showing nearly 12,000 oil trucks crossing into Turkey. Everyone had always known Turkey’s involvement from day one, it was no secret. It is impossible to hide 25,000 tanker trucks, as impossible to hide them as it was for major US defense contractors like Haliburton and Bechtel to supply the majority of the oil transport vehicles for ISIS.

Yes, it’s true, American highways, particularly with plunging oil prices, are virtually free of oil tankers with thousands of them being purchased through straw corporations and shipped out of Houston for “parts unknown,” meaning Turkey.

Those tankers now ply the roads of Syria and Iraq. 100% of the oil goes to Turkey, but not all of it is ISIS oil. Much of it is oil “hijacked” by Kurds as part of their longtime dispute with Baghdad over oil revenue. Baghdad sends 17% of Iraq’s oil revenues to Erbil in exchange for 550,000 barrels a day of oil produced from officially controlled Kurdish production areas.

However, now with much of Iraq’s oil production area in ISIS control or so we are told, the Kurds are now producing, sources tell us, over 1,000,000 barrels a day and sharing revenue on that overage with their business partners, the Erdogan regime and ISIS.

Thus, the roads that carry the majority of the oil into Turkey are guarded and policed, over their length by Kurds, then ISIS, then Kurds again until they drive unmolested and unchecked into Turkey, unless of course Russian warplanes wipe them from the face of the earth.

But there is another story here as well, one of Kurdish duplicity, also a story known all along but ignored by the US, not spoken of in Baghdad or Tehran or even Moscow. The Kurds are masters of playing one side against the other, particularly after decades of being victimized themselves. Veterans Today has longstanding relationships in Iraqi Kurdistan, where I worked during the height of the US occupation.

Some might say the Kurds were pushed by Saddam into their partnership with Israel, Turkey and the CIA. This is the actual recent history of Kurdistan with Israel helping govern Mosul during the US occupation and America taking over Erbil. Erbil became a showplace of Kurdish national pride, the Dubai of Iraq, while Mosul is now a hellish sanctum of torture, beheadings and mass graves.

The Kurds and Turks have been in a “danse macabre” for decades, in truth, centuries. Turkey has flown literally thousands of sorties against not only Kurds in Iraq and Syria but in Turkey itself. Large scale military operations have gone on against the Kurdish population of Turkey with thousands of casualties, all under press blackout, while the Kurds of Erbil have backed Erdogan and enjoyed a lucrative business partnership with the Turkish Mafia and its ISIS partner.

What has made this so painful is that saying anything about Kurdish complicity in ISIS operations and finances is taboo in the press. The controlled media is filled with photos of young and attractive female Kurdish fighters and their heroics while there has never been a single photo of an oil truck leaving Iraq until Russia decided to go public.

This has gone on for years and we have to ask, who has this kind of power over the press? The answer, of course is Israel, which brings us to examine Turkey’s partnership with Tel Aviv and how both have covertly worked with both ISIS and the most secret partner of all, the Kurdish regional government of Barzani in Erbil.

What has made the Kurds so successful has been their ability to keep Russia at bay, promising Moscow a partnership with Erbil which may or may not materialize, depending on Russian military success in Syria and what Erbil has to gain by choosing Russia over Turkey, Saudi Arabia and Israel.

This is the game we have gone on here, always a game of survival, one where organized crime and corrupt leaders, perhaps pragmatic like Barzani or delusional like Erdogan, put the world at risk.

Gordon Duff is a Marine combat veteran of the Vietnam War that has worked on veterans and POW issues for decades and consulted with governments challenged by security issues. He’s a senior editor and chairman of the board of Veterans Today, especially for the online magazine “New Eastern Outlook”.
____________