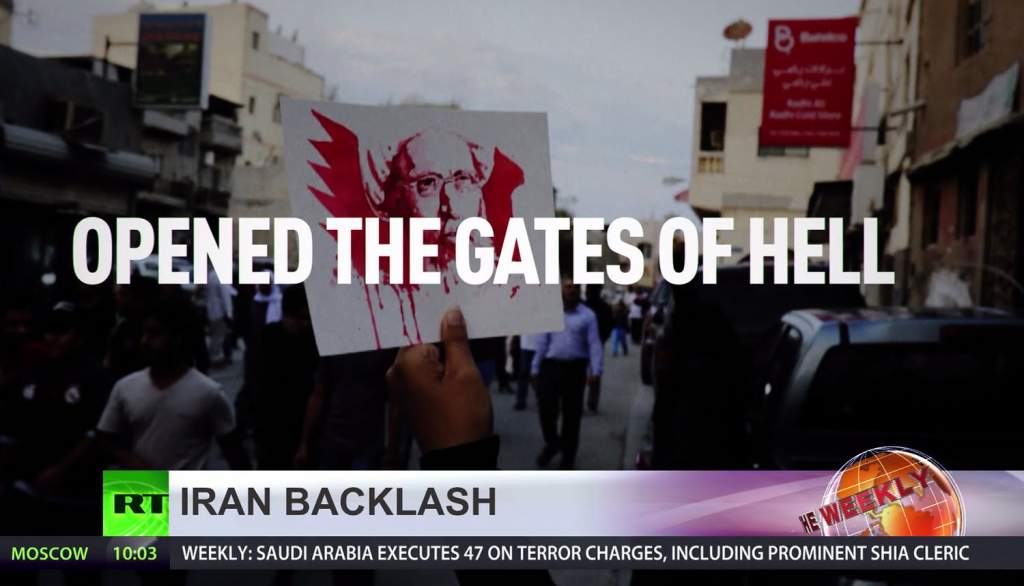 [ Editor’s Note: Now we know why the Saudi Royal Family executed al-Nimr. They knew it would trigger a backlash, with attacks on its embassy a given. I would bet the farm that the Saudis had emptied them out beforehand, knowing damn well what would happen.

Below the Saudi foreign minister is claiming Iran has been setting up terror cells in KSA. But why would Iran do that? It has no beef with the Saudi people, just the state sponsors of terror running it.

Expect to see a wave of Saudi Intel-arranged attacks inside the Kingdom, with the Israelis maybe chipping in with a few. These will be used for a crackdown on the opposition and to blame it all on Iran to divert the bad press that KSA is getting.

But it won’t work, because these are Cold War tactics that even cab drivers have a masters degree equivalent in being able to spot. What we might see instead is Saudi embassies being protested all over the world. The Royal Family is literally playing with fire here, as I wrote in a recent submission to New Eastern Outlook.

These are desperate measures, and if they continue, the blood will be splattered all the way to Washington, because it has been an abler and abettor in all that the Saudis have done; we have a joint defense arrangement, where American servicemen can be deployed to fight for state sponsors of terror.

That is a crummy use of our troops, but what else is new? Don’t hold your breath over the Vet orgs doing anything about it. They won’t.

Most will duck it, and do the fluff stuff where there is no risk. They tend to rubber-stamp whatever policy is on the table that puts more money into the military, or else they keep their mouths shut.

As for the Saudi government, if they think the world has forgotten their horrible handling of the pilgrimage slaughter in Mecca, they have lost their minds. Respect for the Kingdom is going down like a stock market crash.

We hope the Saudi people will be able to sort it all out eventually. Maybe they will introduce their ruling class to the fate they have dished out to others. In the meantime, maybe others will want the Saudi embassy closed in their countries, and wait until a new Saudi government is in power to open them back up… Jim W. Dean ]

Saudi Arabia has cut diplomatic ties with Iran over the storming of its embassy in Tehran on Saturday. The move comes while relations between the regional rivals are plunging over the execution of a top Shiite cleric.

Speaking at a press conference on Sunday, Foreign Minister Adel al-Jubeir demanded that the Iranian diplomatic mission and related entities leave the country within 48 hours.

He said Riyadh would not allow the Islamic Republic to undermine the Sunni kingdom’s security.

Jubeir claimed the Tehran attack was similar to what he called earlier Iranian assaults on foreign embassies there, accusing Iran of creating “terrorist cells’ inside Saudi Arabia.

“The kingdom, in light of these realities, announces the cutting of diplomatic relations with Iran and requests the departure of delegates of diplomatic missions of the embassy and consulate and offices related to it within 48 hours. The ambassador has been summoned to notify them,” the foreign minister said.

The move comes after angry Iranian protesters stormed and set ablaze the Saudi embassy in Tehran on Saturday night during a rally in condemnation of Riyadh’s execution of prominent Shia cleric Sheikh Nimr al-Nimr.

Nimr was among 47 people beheaded or shot by firing squad across Saudi Arabia on Saturday in the biggest single-day execution spree since 1980.

All but four of the condemned were convicted as Al-Qaeda members, while Nimr and three other Shias were accused of inciting riots among Saudi Arabia’s Shia minority between 2010 and 2012, when Nimr was arrested.

The execution of Nimr, a public figure popular with youths, alongside terrorists responsible for a series of bombings carried out between 2003 and 2006, provoked additional outrage in the Shia world. Iran summoned the Saudi ambassador, and just hours later, a mob set fire to the Saudi embassy in Tehran, chanting “Death to Al Saud!” – the ruling family of Saudi Arabia.

The Saudi consulate in the city of Mashhad in northwestern Iran was also attacked by protesters on Saturday, with police interfering after rocks and Molotov cocktails were thrown at the building.

Earlier on Sunday, Iran’s Supreme Leader, Ayatollah Ali Khamenei, released a provocative cartoon, which drew a comparison between the executions by Saudi Arabia with those carried out by Islamic State terrorists.

Khamenei also issued a statement saying “divine vengeance” would surely befall Saudi Arabia because of its execution of Sheikh Nimr al-Nimr and condemning Riyadh for its bombing campaign in Yemen and support for the Bahraini regime.

Police were forced to use tear gas to disperse the protesters, who made their way into the building and trashed the ground floor of the embassy, tearing apart Saudi flags, furniture and documents.

The building then caught fire and was engulfed in huge big blaze, apparently caused by Molotov cocktails thrown by the rioters.