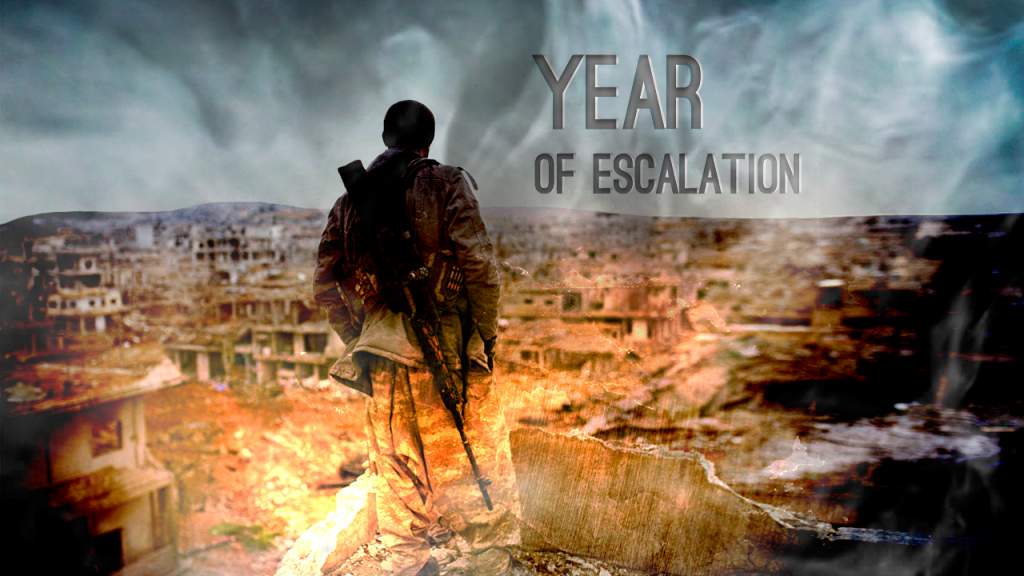 The year 2015 was marked by a series of crucial diplomatic and military developments in the world. The old world order established after the Cold War is rapidly changing. Russia, China, and Iran have become the main forces openly making steps to change the global system. In turn, the US-led block is seeking to retain the old world order by any means.

The clash of interests in crisis regions around the world is engendering a serious escalation. Even if 2015 was successful for Russian and Iranian diplomacy, the situation remains complicated on the ground. While neither of the main world crises have been resolved or is there any expectation that they will be resolved in the nearest future, it is possible to summarize provisional results of the year.

The situation in Libya, a center of tensions in the Mediterranean, is deteriorating with fail of the UN-led peace initiatives. Local ISIS branch is deeply entrenched in the war-torn country. It’s expected that flow of foreign militants into Libya from the Syrian and Iraqi directions will grow if Syria and Iraq continue successfully their anti-terrorist operations fueled by the Russian Air Forces’ presence in the Middle East region.

Separately, ISIS increased activity in the Sinai Peninsula destabilizing the domestic situation in Egypt which tries to exercise multi-vector foreign policy in the region which not satisfy its Western-backed neighbors. The local destructive forces are also attempting to destabilize Egypt, de facto, assisting the militants. In turn, Cairo is strengthening its security efforts.

In the Sahel region the humanitarian situation remains extremely fragile while the number of terrorist attacks is increasing. Boko Haram militants stated allegiance to ISIS remain the most dangerous terrorist threat there.

The European migration crisis is especial acute. Since 2013, a cruel competition has been going among migrants, European governments and local societies. Immigrants concentrated in the entry point states move to the countries of the Central Europe (Germany, France) and the North Europe (United Kingdom, Sweden, Norway), spread over the whole union.

The European governments impacted by critical look of the public opinion and the economic crisis have been trying to stop this process using the more and more gray approaches based on the wide notion of nation security concepts and the disregarding of human rights.

However, the para-military operations in the Mediterranean sea and the usage of unadapted camps only conducts an additional exacerbation of migrants often pushed from their homes by the circumstances of insuperable force. In turn, inability of governments to solve the ongoing crisis conducts the anger of European citizens and contributes to the growth of radical parties and movements.

Thus, the migration crisis has also triggered additional disputes between the national elites and European bureaucracy. European nations are faced with a dilemma: to surrender under the pressure of the main European powers and the eurocracy or try to defend what remains of their unique national sovereignty.

The projects as the National Front Party, Marine Le Pen, aspires to renew its own national goals are strongly opposed by the mainstream European establishment.

Meanwhile, NATO is continuing military build-up in Europe stationing additional forces, exercising numerous drills and even attempting to move nuclear warheads to the Russian borders. In early December 2015, Poland’s government issued a number of statements concerning the country’s participation in the NATO Nuclear Sharing program, which allows NATO member countries to deliver US nuclear warheads in wartime, using their own means of delivery.

The smoldering conflict in Donbass, a corrupt government and unregulated paramilitary groups consisting of criminals and radicals make Ukraine a zone of instability in Europe. The situation is worsening due to the unavoidable economic collapse and the Kiev’s government inability to negotiate.

The whole Middle East is affected by the major crisis. Syria, Iraq, Yemen and the Israeli-Palestinian conflict are its core, but the destabilization has been spreading. Turkey is affected by terrorism, Kurdish insurgency and economical instability. Israel is involved into the conflict against Palestinian. Saudi Arabia is involved into a protracted war in Yemen and affected by Yemeni cross-border raids. – FPD Middle East Big Game

Separately, the Russian military operation in Syria marked a loss of the US’s monopoly on the recourse to force. Now, the US and its partners are losing the leadership in the Middle East region. The success of the alternative anti-ISIS coalition will mean that the US could lose the leadership in a great part of the world, in Eurasia. For Western-backed states as Turkey and Saudi Arabia it means decrease of their influence in the region.

Turkey has been shaping its approach in the region. It includes an additional rapprochement with Saudi Arabia and Qatar which leads to a hard anti-Iranian policy amid the ongoing cooling in relations with Russia.

Meanwhile, the US has sent ground forces, including special operations units, into the region. And such countries as France, the UK and Germany has begun to operate more actively in the region. It seems that NATO powers have realized the strategy aimed at Assad’s ouster by a diverse range of militant groups including ISIS has failed.

In this case, the NATO allies urgently need a new plan to hold control at least of the northern oil corridor from Iraq and try to take advantage of this opportunity to involve Russia in a long expensive war, in other words, to accomplish that which they failed to do in Ukraine. If the NATO contingent tries to occupy crucial infrastructure including oilfields, it could easily lead to an open military conflict in the region.

The borders between the Central Asian states and Afghanistan have become increasingly active in terms of militant, diplomatic and security activity. Militant activity has increased in northern Afghanistan in recent months, punctuated by Taliban forces’ capture of the town of Kunduz in late September and ISIS militants have been gathering momentum and concentrating there.

ISIS militants see this region as a foothold for further expansion into Central Asia. The important fact is they don’t fight foreign or Afghan government troops. They conserve and gather strength. The threat is also growing in the South. The number of ISIS militants has been growing at the borders of Tajikistan and Turkmenistan amid serious domestic problems of the Central Asian states.

In this case, the Central Asia is attracting attention of the key regional players: Russia, the US and China. While the all sides state that they are interested in the regional stability, the Washington administration is clearly seeking to expand in the Central Asian countries amid the failing Afghan projects.

The tensions in the South China Sea is a visible part of the ongoing US-China standoff in the Asia-Pacific region. The Obama’s “pivot to Asia” and the US newly released maritime strategy de facto mean that the Washington has taken a course on a long-standing countering of the China’s influence in the region. A core but often unstated component of U.S. national strategy is to maintain global superiority at sea.

By controlling the seas, the United States is able to deploy military power and to control the movement goods worldwide. In the Indo-Asia-Pacific region the US has been rapidly building political, economic and military alliances to balance the raise of the China’s economic and military power. Beijing can’t ignore this fact. The China’s strategy maritime strategy aimed to defend its eastern coastal area and crucial maritime routes in the Indian Ocean challenges the American approach.

Another hot point in the region is the Korean Peninsula. 2015 was marked by a new standoff between the North and South along the Demilitarized Zone conducting a complicated environment. The situation is further challenged by an aggressive South Korean stance supported by the US.

According to Korean military sources the US has been considering to dispatch B-52 or a B-2 Spirit stealth bomber and a nuclear-powered submarine currently stationed at Japan’s Yokosuka naval base. The US has previously dispatched its military assets to the peninsula to support Seoul in its stand-off with Pyongyang two years ago.

In April 2013 it had flown B-2 stealth bombers. The tensions in the Korean Peninsula will be definitely used in the ongoing US-China dispute for the leadership in the Asia-Pacific.

Unfortunately, international practice revealed that global actors were not able to cooperate fruitfully to overcome mounting differences. The establishment took on the usual clannish spirit and protected the corporate interests of the crony elites, while the election race in the United States and the deepening economic recession fueled the flame. The entire year was steeped in the smell of gunpowder, but had not yet enveloped the world in the smoke of a global war.

In 2016, we should expect continued tension in international relations. The number of local conflicts will not be reduced. There are high chances that there will be a significant escalation of the conflict in the eastern Ukraine. In the spring of 2016 the situation in Central Asia is expected to be destabilized, and Afghanistan could once again turn into a full-scale civil war. The zone of conflict in the Arabian Peninsula will expand. Turkey is at high risk of civil war. In turn, the intensity of the fighting in Syria and Iraq will decline or remain at current levels.

2016 will be marked by the growing probability of a wider global conflict. The turbulent climate in the South China Sea, the deployment of nuclear weapons in Europe, the colonial style of US foreign policy and its double standards are capable of bringing the world to the brink of nuclear catastrophe in the near future.