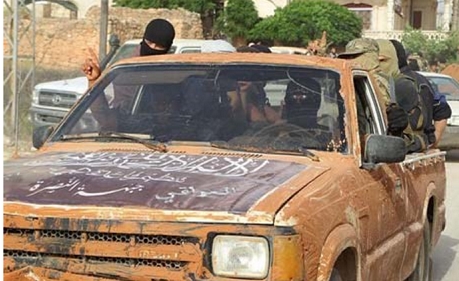 Rebels of the al-Qaeda-affiliated al-Nusra Front captured the Syrian city of Idlib last May. AFP photo
A member of the Islamist Jaish al-Fatah (Army of Conquest) coalition, Failaq al-Sham, announced in a statement on Sunday that it is withdrawing from that group in order to redeploy its members to the Aleppo region.

Jaish al-Fatah (which includes groups like the Syrian offshoot of al-Qaeda, Jabhat al-Nusra) overran Syria’s northwestern province of Idlib last May at the expense of the regime of President Bashar al-Assad. It has held it ever since.

The Failaq al-Sham (Sham Legion) statement argues that since Jaish al-Fatah “finished its mission in the battle to conquer Idlib,” it now sees it as its responsibility to go fight their enemies in the Aleppo region.

“As enemies from inside and abroad, the regime and its Shabiha [militias], Shiites and Russians concentrate efforts on bringing down the Aleppo region, we are giving priority to supporting revolutionaries in the Aleppo area,” the online statement read according to Reuters.

“We therefore announce our exit from the Army of Conquest operations room,” it added.

Such a statement does not indicate there is any animosity between the Sham Legion and Jaish al-Fatah.

Syrian soldiers and militants under the command of the regime have advanced against opposition-held areas in parts of the key provinces of Aleppo and Latakia alongside small numbers of Iranian Revolutionary Guard militants with the support of Russian air power in recent months. Opposition forces, many of them Islamists, also managed to spearhead some advances into the strategically-important province of Hama.

The Sham Legion is a group of, so-called, moderate Islamists which is estimated to be 4,000 strong. Its primary areas of operation before it declared its desire to relocate to Aleppo have been the provinces of Hama, Homs and Idlib.