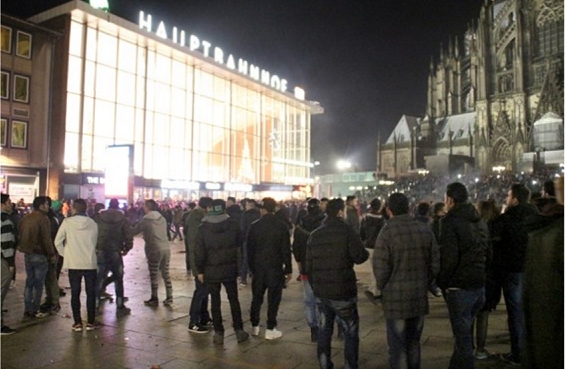 –
[ Editor’s note:  VT has its own reports which tell of police standing around with their hands in their pockets while nightclub bouncers come to the aid of women being groped and mobbed.  Thus, when police officials say this seems like an organized attack, we feel safe in looking at police as not only standing aside but undercover police as the likely parties involved in the assaults as well.
We expect to see more incidents like these, staged by police and carefully coordinated with the press, playing on and building hysteria against not only refugees but Islam as well.  Anyone who has ever been to any holiday celebration in Germany and hasn’t been trampled to death by both excess police presence and people who video everything, must not leave the house often.  No arrests?  No video?  Can we call this another “Hebdo?”… GD ]
–
____________
The German police have identified three suspects after the attacks on women during the New Year’s Eve in Cologne, according to  Interior Minister Ralf Jäger. For now, no one was arrested yet. Meanwhile, there are similar incidents reported in Hamburg.

After the assault of dozens of women in the German cities of Cologne and Hamburg, the police first track. It would be three men, who might be part of a larger group of men who harassed women, assaulted and robbed have on New Year’s Eve in Cologne. According Jäger minister of North Rhine-Westphalia has opened an investigation.

Meanwhile, get more details are known of what happened in the particular night in Cologne.  Thousands of revelers gather on New Year’s Eve at the station, but what a nice New Year party should be, turned out differently. Police received up to now been a hundred reports of alleged victims, three quarters have a sexual bias. “Many women gave in interviews that they were also groped ‘, said a police spokesman.

“It seems like everything was planned in advance,” said the German Minister of Justice, Heiko Maas.”Something like that does not come from nowhere, there must be someone behind it,” says the minister.

Moreover, not only were several complaints filed in Cologne, also in Hamburg, there were sexual assaults on New Year’s Eve. In the Reeperbahn in Hamburg were women, according to the police every time surrounded by several men who were pawing.