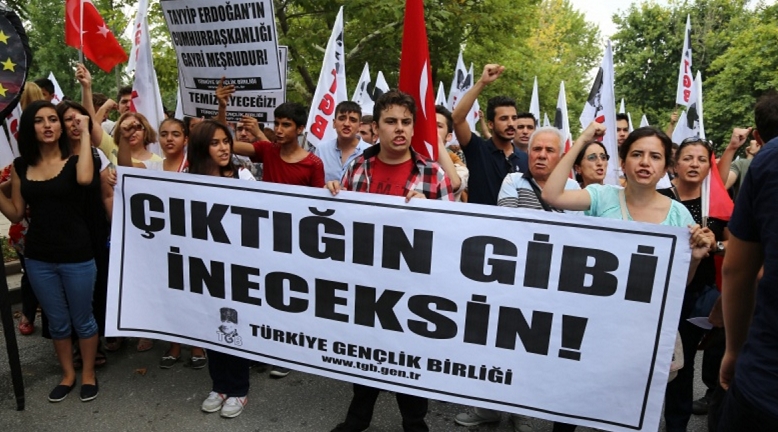 Constitutions written by men of good intentions honour the People, but do governments really care?

VT Ankara, Turkey – Democracy, equality and rule of the people are just words in the Constitutions of countries, but in reality the people have little say in their governments. Yet we often fall prey to categorising the acts of governments as the true sentiments of the people. What the people really feel is often distorted by the mass media that is controlled by governments, which in turn are controlled by the global bankers who want to rule the world.

Contrary to reality, the average US citizen in the 1980’s saw Turkey as a backward but friendly country somewhere in “Arabia” and one of many distant countries to be “nuked” if they got out of line. Looking through the distorted lens of mass media, the average US citizen today probably considers Turkey as an accomplice of ISIS. But do the actions of the current regime under Turkish Head of State Erdogan really reflect the sentiments of the Turkish people?

Erdogan commands around 45% of all eligible votes in Turkey, but the remaining 55% generally has no love for him and want to see him go. The vote alone has not made this possible and he is furthermore surrounded by walls of immunity. He can be charged with nothing short of treason, which requires a majority in Parliament that the opposition parties do not command. Any public show or expression of opposition is neutralised by swift and often excessive police or legal measures. Inside Turkey, only a military coup can remove Erdogan from power and the Turkish Armed Forces is in no apparent state to pull it off.

At least half the country is either wary of or does not approve of most things Erdogan says and does. Even though Erdogan’s voter base generally sees him as a hero, it is not an unanimous bloc. It is actually a mix of ultra-religious, religious, nationalist, capitalist and opportunist groups that can be broken down into two basic parts as naive and unscrupulous.

It is easy to get caught up in the propaganda of Erdogan’s media empire in Turkey, as is evident from his success in both national and municipal elections. For example Erdogan and his AK Party have managed to convince their voter base that if they go, it will mean the end of Muslims and Islam in Turkey. Ironically, all of the opposition parties in Parliament would probably do more justice to true Islam than Erdogan and his cronies.

Another example is the way the propaganda machine spins Erdogan’s debacles in the international arena, and Turkey’s gradual isolation from its neighbours, as “standing tall against evil foreign powers, the Jewish lobby, money for interest lobby, stock exchange lobby, capitalist lobby” just to name a few. A recent favourite is “the preacher lobby” in reference to Islamic sect leader Fethullah Gulen, a guest of the CIA in Pennsylvania. What cannot be spun, such as Erdogan’s dealings with ISIS or his money empire, is simply ignored or distorted to the point of confusion.

It is a fact that the overwhelming majority of Turkish people are incensed by Israeli aggressions against Palestinians and will tend to side with Muslims under situations of conflict. Yet, the Turkish public including much of Erdogan’s voter base has drawn a very definite line when it comes to ISIS and its infernal actions. There is wide consent that ISIS is a terrorist organisation and that it is un-Islamic. Erdogan’s involvement with ISIS is spun in his media empire as fabrications and mud-slinging at an “impeccable” leader. The free media is often hampered by court orders for news black-outs. Half the country knows the truth and the other half is beginning to have doubts simply because there are too many questions.

Having lived for decades under Ataturk’s tenet “peace at home, peace in the world”, the people of Turkey are highly discontent with the reality of chaos at home and potential war with neighbouring countries. Erdogan and his stooge Prime Minister Davutoglu fooled the Turkish people with their own “zero problems with neighbours” slogan, but it has turned in to the “problem of zero neighbours”. The people are experiencing the bitter results of this contrivance first-hand and all the roads lead to Erdogan.

The popularity of ISIS among all Turkish citizens is similar to the popularity of the PKK among its citizens of Kurdish origin, that is to say not more than a few percent. However, the sympathizers of both camps are spread out fairly evenly across the country with considerable presence in major cities. Both terrorist groups recruit from very limited, usually uneducated and fanatical sympathizer bases, but it seems they have been successful enough to survive and even thrive so far. Their networks, their creative videos and their propaganda on the Internet have proven to be strong points.

Wannabe Sultan and Caliph of the Islamic world, Turkish Head of State Erdogan has openly declared support for the Islamic Brotherhood in the past and has seen himself as the true leader of the movement. He also had high hopes for ISIS, but his dream that it would be his militia in his bid for regional power was shattered when Abu Bakr al-Baghdadi stormed the Turkish Consulate in Mosul back in June 2014 and made it his temporary headquarters.

A total of 49 hostages with families including the Consul General were kept at secret locations for over three months and were later released in return for ISIS sympathisers secreted out of Turkish jails. In an act of the utmost insolence, al-Baghdadi even went as far as declaring himself Caliph before the “mighty” Erdogan!

So why would Erdogan continue to deal with ISIS some might ask? It may well be that he has placed money before God, but he is a vengeful man and he will wait until the right time to exact his retribution. If need be he will reclaim the Caliphate with blood, in line with the massacres between Muslims for the Caliphate in the early years of Islam.

The UN Security Council has met on January 6, 2016, in a closed session, and has also discussed Erdogan’s involvement with ISIS at the behest of permanent member Russia. Undoubtedly, hard evidence will be presented and may even possibly lead to UN sanctions against Turkey. Unfortunately, anything that may come out of these meetings has already been overshadowed by the media coverage of the emergency meeting the next day for North Korea’s alleged hydrogen bomb test.

Even if the UN Security Council meeting leads to UN sanctions or an international high court ruling, will it be enough stop Erdogan?

Whether they will also lead to criminal proceedings in international courts is a lengthy story. Furthermore, Erdogan does not recognise the legitimacy of the Western legal system. When the European Court of Human Rights upheld a Turkish High Court ruling that banned headscarves in public office back in 2004, Erdogan stated “what do they know, the authority for this matter is the Ulema” as a high court of Islamic Sharia Law.

All of this will undoubtedly put pressure on Erdogan, but time is in his favour and he has already set up bases in a number of Islamic countries where he can “abdicate” to when he is really cornered. Until then he will continue his merciless rule in Turkey and abuse the full powers of the State. He will continue weaving his web of lies with even more fury, hoping to rally national support for himself as the heroic “Lone Man”.

Al long as he remains useful, he will continue to do the bidding of the NWO as their novice Dark Lord and create more chaos that he can use to his benefit. He is powerful, he has a calling, he is unpredictable and for the time being he is here to stay. But he does not represent the majority of people who are subject to State persecution in Turkey, whose voices are hardly heard in the blaring propaganda of the media.

Yet the grass-roots undercurrent is very strong, with more and more people wising up to the big picture. The people of Turkey have had enough of the chaos, the failing economy and a decade of lies. Even Erdogan’s voter base is tired of his aggressive stance, his bid for supreme Presidency and his neo-Ottoman dream, although they will stand behind their “world leader”.

“As you rose, you will fall” reads the banner as brave secular Turks protest Erdogan, risking physical harm and jail-time

Forget the governments and focus on the people. All over the world the people do not want war, they want peace and prosperity. Left to their own devices, they are overall quite happy to coexist with their neighbours. But for the NWO there is no money in peace and stability. And heaven forbid that the masses should awaken and ask for the return of power that their forefathers relegated to politicians in good will.

Outwardly complicated and multi-layered, the NWO global master plan is but a grandiose house of cards. Recognise it as such and the fog of chaos will dissipate, revealing a thousand weaknesses to be picked at in the “reality” that is shoved down our throats every day.

Look beyond all the fake facades and expose the NWO as the glorious house of cards it really is.