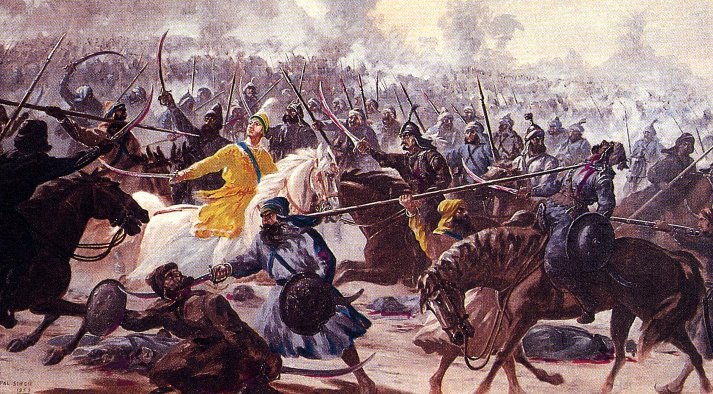 [ Editor’s Note: I held off publishing this for a month, because I wanted to see what would happen to substantiate the claims of a 100,000-man Gulf and US force moving into Western Iraq as a virtual occupation army and protection force for ISIL forces that might get chased out of Syria.

Mr. Simonov includes his own skepticism below with little items, such as, US Senators do not negotiate troop deployments with foreign states. But at the time this story came out, the Saudis were getting savaged in world press as backers of ISIL, and Turkey was beginning to share that stage with them.

But what a difference a month makes. The Saudis decided to foment a theatrical spat with Iran as an attention diverter from Syria and the battles behind the scenes, as the Saudis try to get their terrorist groups negotiating seats at the table in the hope for a Syrian conference this January.

After all the dead and wounded, killing one more, Sheik al-Nimr, took the attention off everything else in the Mid East for several days. Diplomatic relations have been broken between KSA and Iran, and the Houthis are claiming that the Saudis bombed the Iranian Embassy in Yemen — an obvious payback for its Tehran Embassy attack, despite arrests already being made in that case.

With the Saudis mired down in the Yemen war, and having to resort to bringing in combat mercenaries to help reduce Saudi KIAs and wounded, it seems unlikely they and their little Gulf State friends could even field that much manpower, or even if they would show up, if ordered to do so. I wouldn’t.

Today we hear stories being leaked about the US backing off its relationship with Saudi Arabia. These seem suspicious, as secret agreements have us unfortunately joined at the hip, not the least of which is our guarantee for their security in return for only selling their oil in dollars.

We are beginning to see more and more here at VT, where the main purpose for mass media now is to disseminate “seeded” news, absent any investigative journalism to challenge and debunk it, something we Viet Nam-era people remember being a common thing in our younger years. It is looking like 2016 will be more of the same… Jim W. Dean ]

According to the Iraq Press Agency, the head of the Iraqi parliamentary bloc Irada, Hannan al-Fetlaui stated that up to 100,00 foreign troops are headed to Iraq.

Up to 90,000 are going to be sent by the Arab and Gulf States to Iraq to fight the Islamic State (ISIL), while another 10,000 will come from the United States.

According to the MP, she received this information from a reliable sources that was involved in the talks between Senator John McCain, and Iraqi Prime Minister Haider al-Abadi. Hannan al-Fetlaui clarified that the meeting took place on November 27 in a joint US-Iraqi operation headquarters in Baghdad, which coordinates joint military actions against ISIL.

According to the head of Irada, Saudi Arabia, UAE, Qatar and Jordan are going to send the better part of the troops that are to be deployed in the western parts of Iraq. It’s reported that the Iraqi Prime Minister openly expressed surprise about such a decision, but John McCain, however, told him that this is a decided matter and there’s nothing to discuss.

While still in Baghdad, McCain, accompanied by Senator Lindsey Graham, stated that American soldiers will only provide logistical support to the Arab military contingent from Egypt, Saudi Arabia and Turkey. It is clear that Egyptian and Turkish troops were mentioned as being used to implement the plan and get them involved in the Syrian conflict, since Ankara is desperate to launch a military invasion of Syria and create a no-fly zone over it.

However, this plan sounds particularly delusional, since Russia has already deployed over a hundred combat warplanes and helicopters in Syria, along with the top-of-the line anti-air complexes S-400 and a naval equivalent of the S-300, virtually creating a no-fly zone of its own over Syria.

But what is curious is that US Secretary of State John Kerry and Secretary of Defense Ashton Carter hinted that special units will be sent to Iraq and neighboring Syria, while implying that they’ve reached an agreement on this issue with Baghdad.

According to Hannan al-Fetlaui, in response the Office of the Prime Minister issued a statement that it welcomes any foreign aid in the fight against ISIL, but only when it is demanded by Iraqi officials.

There’s a number of questions that must be asked in light of this development: Who is John McCain to decide when US troops should be sent abroad? Has the US president and the US Senate no say on this issue anymore? Let’s make it clear, an ordinary senator of the Republican Party is saying what America will do next, while the president who is sitting in the White House is a Democrat.

So, if Obama has given up on the attempts to run the government, which is unlikely, McCain’s actions are nothing more than a case of amateurish propaganda. But one can be pretty sure that it is illegal to try to throw a president under the bus, even in the US.

Has the Prime Minister of Iraq Kadhim Al-Abadi issued an official request to bring foreign expeditionary forces into Iraq? Is there a UN Security Council resolution on the involvement of foreign troops in Iraq? There is not, so an official invitation by the Iraqi government is needed, as it was the case with Damascus which invited Russia’s air corp to assist its troops in the fight against terrorism. A speech given by a mere member of the Iraqi parliament is not the official position of Baghdad.

It looks like she has simply leaked the information to the media about the upcoming invitation of foreign troops to Iraq in order to prevent it. After all, neither the Sunnis nor Shia’a, especially those who have experienced all the “beauty” of the US occupation will want to see it repeated ever again. For example, supporters of Mahdi – the most influential Shia’a leader in Iraq, who has armed troops under his command, will not welcome this development. Additionally, Iran is more than capable to put some pressure on Baghdad to prevent this.

And who is going to believe that the Shia’s rulers of Baghdad and Tehran will allow thousands of armed soldiers into Iraq, sent by the Sunni monarchies of Saudi Arabia, UAE, Qatar and Jordan? It’s hardly a secret for anyone that Saudi Arabia is Iran’s sworn enemy.

And finally, before sending troops to Iraq, the Persian Gulf monarchies should take a closer look at the unfolding, humiliating defeat they’re suffering in Yemen. While the Houthis have no aviation or air defense capabilities, they are beating the Persian Gulf coalition hands down, while retaining control of a better part of the country. It seems that the Al Saud clan has lost the last remnants of common sense.

The conclusion is simple – if what we’re witnessing now is not yet another figment of McCain’s inflamed imagination, caused by his inability to leave the hardships of his Vietnamese captivity behind, then what is it? What is happening in Washington?

Has the White House lost all control over the actions of such madmen, who are dragging the United States back into a war which it was pretty desperate to finish back in 2011? Those were grim days. Apparently, there’s no comprehensive plan of action in place. The US as lost all control over the Middle East, which is why it’s incapable of providing an adequate answer to the threat of ISIL, which has been admitted by President Obama in one of his speeches.

So this very well may be a case of desperate propaganda, that will scare Washington and its Arab allies more than anyone – Arab allies who are pretty reluctant to become engaged in Iraq, knowing the fighting they will face and the defeat they will be handed. A preview of this possible future can be viewed in the Yemeni campaign which has only proven that they will suffer one bitter defeat after another.

Those allies are even doubting their ability to save their own governments from the chaos created by Washington, and they have a pretty good reason to do so.