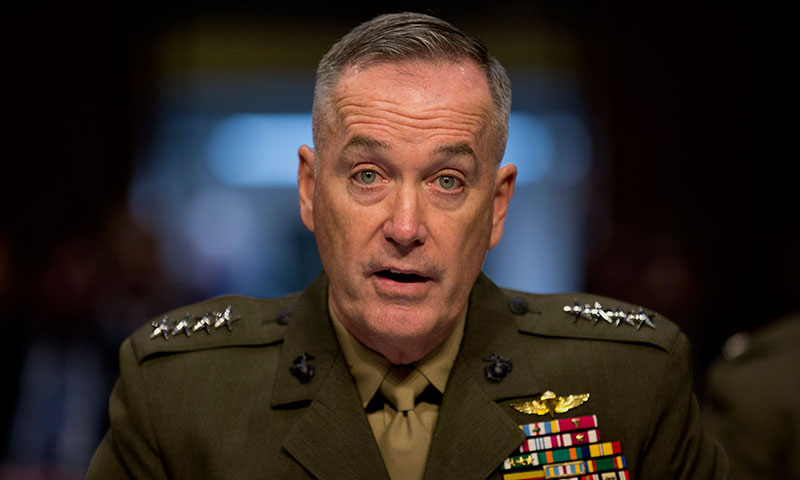 Chairman of the US Joint Chiefs of Staff General Joseph Dunford arrived in Iraq where he held a meeting with US Ambassador to Iraq Stuart Jones and Iraqi Prime Minister Haidar Al-Abadi, the US Joint Staff said in a Twitter message.

[ Editor’s Note:  Oh my, would I have loved to have been a fly on the wall at this meeting. I suspect one of the topics high on the list would have been trying to get the reports coming out of Iraq about US playing both sides against the middle with its fighting ISIL while making sure it remains a defacto destabilizing force.
–
Note the sparseness of this report. We will certainly be digging around to learn if there is a policy shift in play or is the US just trying to keep a lid on the current Iraq situation to not leave the back door open for the Russians, if not right now then later when Syria winds down so Russian air power remains both in Syria and Iraq at the invitation of both governments.
As Putin said in an impromptu comment a month ago, most of the cost of the operation in Syria was coming out of the training budget. As I remember, training budgets are a permanent part of military expenditures... Jim W. Dean ]
____________
– First published  …  January 08, 2015 –

WASHINGTON (Sputnik) — Earlier in the day, the United States approved the sale of $800 million worth of Hellfire missiles and Captive Air Training Missiles to Iraq. The sale announcement came as the United States has vowed to help Iraqi forces fight the Daesh militant group within its borders, as the terrorist organization has claimed swaths of territory in the region.

US President Barack Obama had a phone conversation with Abadi on Thursday and congratulated the prime minister with Iraq’s progress in fighting the terrorists.

Iraqi security forces have recently advanced to the center of Ramadi, the capital of Anbar province, after the city fell to IS insurgents in May, in Baghdad’s largest defeat against the extremist group.