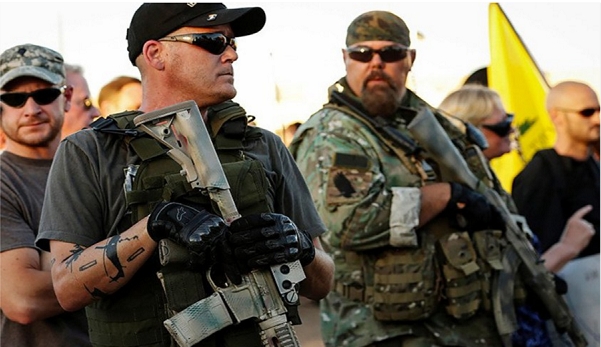 Yes, we already knew that the militia thugs who have seized the Malheur Wildlife Refuge are a bunch of wannabe tough guys who think they have valid reasons for being such monumental asshats, but it also turns out that some of them are downright liars who are pretending to be military veterans.

Brian Cavalier, who is the “personal bodyguard” to Ammon Bundy has told reporters that he served in both Iraq and Afghanistan as a member of the Marines. One tiny problem: the Marine Corps has absolutely no record of him. Why might that be? Because he never enlisted in any branch.

In addition to Cavalier, Blaine Cooper also claims to be a Marine veteran. The truth, however, is much different: Cooper was on the “Delayed Entry Program” and never even went to boot camp. Guess he realized he wasn’t cut out to be a real hero so now he has to carry a gun and pretend he’s a man.

“I’m a retired United States Marine, I can rage.”

No, you’re a pretend Marine and all you can do is lie. When confronted by the media about his false claims of military service, including what the Marines said, Cavalier nervously replied:

“That’s unfortunate that someone would say that. I’m not commenting on anything. I told you what it is.”