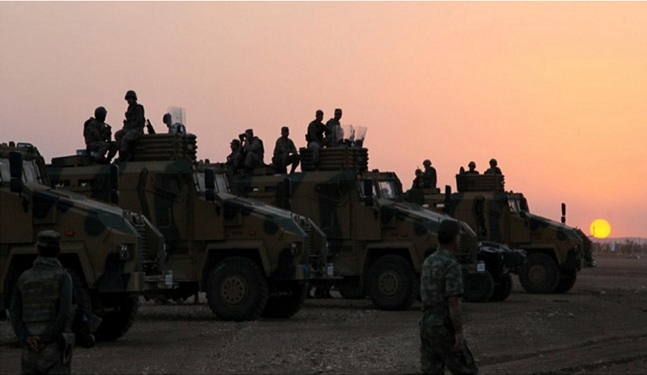 [ Editor’s note:  Turkey’s “camp” inside Iraq, strategically placed to funnel ISIS oil into Kurdish Iraq safely and on to Turkey, was never under ISIS attack.  The idea is absurd, as pointed out by the Iraqi government.
–
If Turkey or even the “rope-a-dope” Kurds wanted to gut ISIS, they could simply do nothing, as opposed to what they are doing now, working 24 hours a day transiting stolen oil into Turkey and pumping in weapons with UN help, carried in trucks from Turkey with TOW missiles in their telltale huge wooden crates haphazardly stickered as “baby milk powder.” Barzani, Erdogan and Netanyahu are laughing all the way to the bank on this one… Gordon Duff ]
____________
–
Iraq has rejected Turkey’s claims that its forces “illegally” deployed to the Arab country had come under attack by Takfiri ISIS terrorists.

“The joint operations command denies there was a terrorist attack on the position of Turkish forces in Bashiqa by the terrorist Daesh (ISIS) recently,” Iraq’s state television said, referring to a military base near Mosul.

However, the Iraqi TV said,

“The joint operations command denies what was relayed in some media outlets from the Turkish president about clashing between the Turkish forces inside Iraqi territory and the terrorist Daesh whether in Bashiqa or any other areas.”

Ankara has acknowledged there was a “miscommunication” with Baghdad over the troop deployment. It later withdrew some soldiers to another base in the nearby autonomous Kurdistan region and said it would continue to pull out of Nineveh but Erdogan has ruled out a full withdrawal.

Ankara claims that the camp, located some 140 kilometers (90 miles) from the Turkish border and about 20 kilometers from Daesh-controlled Mosul, is being used to train Iraqi Kurdish Peshmerga fighters battling Daesh, Press TV reported.