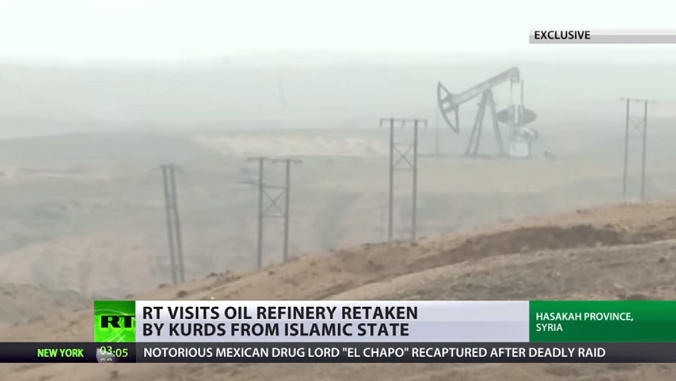 [ Editor’s note:  While Syrian Kurds are isolated and even bombed by Turkey, their brothers in Iraq under President Barzani, work not only with Turkey very closely but are shepherding ISIS oil into Turkey 24 hours a day, a very different story than the one told here.  The US backed YPG’s struggle against both ISIS and Turkey is a huge embarrassment to Iraq’s Erbil government… Gordon Duff ]
–   __________
… from Russia Today,  Moscow
–
RT correspondent Murad Gazdiev has became one of just a few international journalists allowed to visit an oilfield in the Hasakah province, only recently retaken from Islamic State by the Kurdish militia.

The Kara-choh oilfield in the Hasakah province is truly vast. Pump heads stretching literally from horizon to horizon and they are all connected with underground pipes.

However, most of the pumps remain immobilized, as Gazdiev has seen. The region recently liberated from Islamic State (IS, formerly ISIS/ISIL, who bullied cowardly media into sugar coating their bestiality through continual name changes) is currently under the control of the YPG (People’s Protection Units) of the Kurdish militia.

Rich in oil the Syrian Kurds may be, but they have no one to sell it to!

The territories to the west and to the south are IS-controlled. Iraq to the east is a major oil producer itself. Turkey to the north arguably views Syrian Kurds as a bigger threat than IS.

“Turkey was always against us – they were hostile from the start. They stopped anything from crossing the border: medicine, food, goods,” Suleiman Halef, the head of Syrian Kurdistan’s Department of Energy, told RT.

The Syrian Kurds have proven they can take care of themselves. They have been able to build primitive refineries of their own.

The problem the Kurds have is that they are limited in their refining capacity and capability. They cannot make complicated petroleum products, only low quality diesels and petrol. So they have to dump oil waste they can’t refine, storing it out in the open until such time they can come back and refine it properly.

The YPG admits that creating pools of oil refining leftovers is bad for the environment, but when it comes to the dilemma of pollution and providing the population with basic needs, they go for the latter.

“We only extract oil from wells that have the most gas. We use it to run a gas power plant, which keeps our towns and cities at least partially supplied. We give priority to essential enterprises, such as bakeries, hospitals, schools,” says Suleiman Halef, an exceptional example of an oil minister who wears a $5-dollar watch.

The YPG has to turn oil pumps on and off to keep the cogs turning, and to keep the equipment operable.

Kurdish soldiers in Syria have proven to be one of the most effective forces in the fight against Islamic State. They have managed to seize strategic territory in Syria’s extreme northeastern province, which have developed oil extraction infrastructure. The Kurds continue to force the jihadists out.

A few years ago, Kurds had about a 1,000 oil pumps under their control. Since then, that number has tripled, as they wrest more and more oil fields from IS control.

Since the beginning of the air operation in Syria on September 30, Russia’s warplanes have made over 5,240 combat sorties. Among thousands of terrorist targets eliminated, an estimated 2,000 terrorist-controlled oil infrastructure facilities have been destroyed.