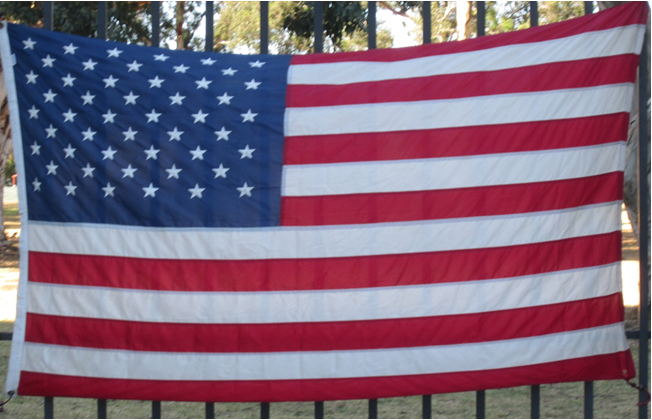 Rosebrock, a 73-year old Vietnam Wartime Veteran, has been criminally charged with “Display Placards / Post Materials on Bulletin Boards,” and the American Flag is his co-defendant

Every Sunday afternoon since Memorial Day, May 31, 2015, Rosebrock has proudly displayed the American Flag in front of the Los Angeles VA’s National Veterans Home in honor of the men and women who have selflessly defended our Nation’s legendary symbol of Freedom and Independence.

On October 25, after nearly five months of displaying the American Flag without incident, two armed VA police officers confronted Rosebrock and ordered him to remove his two Flags, declaring he was in violation of << 38 C.F.R. Security and law enforcement at VA facilities; 1.218 a) 9) Distribution of handbills. The distributing of materials such as pamphlets, handbills, and/or flyers, and the displaying of placards or posting of materials on bulletin boards or elsewhere on property is prohibited, except as authorized by the head of the facility or designee or when such distributions or displays are conducted as part of authorized Government activities.>>

Rosebrock scoffed at the charges and asked the VA police officers if the word “flag” was mentioned in their Regulation, and they responded “no.”

Rosebrock did what any patriotic American Citizen would do and informed them that he was not removing his American Flags. The VA police then swiftly and forcefully removed them and cited him for the above-referenced Regulation and confiscated his two American Flags as “evidence.”

That’s right folks, you read it correctly. In the eyes and mindset of top VA officials who ordered VA police to issue the arrest citation, “Old Glory” is no longer recognized as a patriotic symbol glorifying America’s unparalleled way of life, but is reduced to nothing more than a placard, or materials such as pamphlets, handbills, and/or flyers, and the VA now claims they have the evidence to prove it in federal court.

Rosebrock was criminally charged but not physically detained. However, his American Flags were confiscated, booked and remain in police custody, falsely impounded under lock and key in the “evidence storage room” at the Los Angeles VA police headquarters.

While Rosebrock staunchly defends his displaying the American Flag on VA property, he is unforgiving in his pronouncement against the VA’s flagrant abuse of our Nation’s glorified Colors: “The VA’s scandalous assault on the American Flag is blasphemous and unforgivable. For VA Secretary Robert A. McDonald, a West Point graduate and a Presidential Cabinet Member, to allow the mockery and false imprisonment of our Nation’s symbol of International greatness is disgraceful and tantamount to burning and stomping on the American Flag. What the VA has done and continues to do is shameful, disrespectful, unpatriotic, and un-American. Furthermore, the VA’s deliberate defaming of the American Flag is traitorous and a scurrilous assault on every U.S. Military Veteran and the Flag they pledged their lives to defend. There can be absolutely no tolerance for any of this anti-Americanism by the Department of Veterans Affairs. In sum, the United States Congress must seriously censure VA Secretary McDonald, and President Obama must ceremoniously dismiss him from his Cabinet, posthaste.”

Any doubts about where Rosebrock stands on this?

In the upcoming federal trial, at issue are not only the sham criminal charges against Rosebrock, but the VA’s false condemnation of the patriotic integrity and historic legacy of the American Flag, which heretofore has been renowned world-wide as our Nation’s “Star Spangled Banner” that waves proudly “O’er the Land of the Free and the Home of the Brave.”

Unquestionably, a small child can distinguish the difference between a placard and the American Flag.

This raises the question of whether a federal judge will side with the VA and declare that Rosebrock and his co- defendant violated “38 C.F.R. 1.218 a) 9) Distribution of handbills,” and prosecute them mutually “to a term of imprisonment of not more than six months, as may be determined appropriate by a magistrate or judge of the United States District Court” (C.F.R. 1.218 (b) Schedule of offenses and penalties)

Or, will both be rightfully exonerated since a federal judge cannot prosecute one without prosecuting the other, and the American Flag represents all of us … ‘We the People.’

However, the overriding question remains; does a mature adult who is proficient in American law and congressionally approved and entrusted to serve as a judge in our federal court system know the difference between the American Flag and a placard?

History has proven that not all federal judges are impartial and trustworthy because some can be influenced by third-party manipulation while having no compunctions about imposing bigoted and unjust sentences against innocent defendants.

Of serious concern, Rosebrock may indeed be facing a prison sentence based on the federal government’s predisposed preferential treatment toward non-veteran entities who violate just laws inside the VA, and this same government’s long-standing vindictive retaliation against Veteran activists who protest outside the VA while displaying the American Flag and are charged with unjust laws.

Compatibly, from Dr. Martin Luther King Jr’s famed 1963 “Letter from Birmingham Jail”: “I submit that an individual who breaks a law that conscience tells him is unjust, and is willing to accept the penalty of imprisonment in order to arouse the conscience of the community over its injustice, is in reality expressing the highest respect for the law.”

To date, Rosebrock has received four criminal arrest citations for simply displaying the American Flag on the VA’s front fence for three hours on a Sunday afternoon.

President John F. Kennedy forewarned: “The rights of every man are diminished when the rights of one man are threatened.”

While Rosebrock could speciously receive concurrent six-month federal prison sentences for the four citations, nine of his American Flags have already been unlawfully confiscated and held without bail at the VA police headquarters.

Fellow Americans, let there be no mistake or misunderstanding; so long as our Nation’s Flag is being falsely imprisoned, so are ‘We the People.’

Think about this: Under direct orders from top VA officials, the VA police have removed, besmirched and confined “Old Glory,” charging our American Flag as an imposter.

We the People must stand up and speak out in defense of our American Flag.

“Peoples do not judge in the same way as courts of law; they do not hand down sentences, they throw thunderbolts; they do not condemn kings, they drop them back into the void; and this justice is worth just as much as that of the courts.” ― Maximilien de Robespierre (1758-1794)

On October 30, 2008, Presidential candidate Barack Obama brazenly declared:  “We are five days away from fundamentally transforming the United States of America.”

When a U.S. Military Veteran is criminally charged by our own federal government for displaying the American Flag on VA property in honor of the men and women who have defended our Nation’s Colors, then the United States of America is being fundamentally transformed.

When the American Flag is no longer respected and honored by our own federal government as a revered symbol of We the People, but is essentially converted into a nondescript placard, handbill, pamphlet or flyer, then the United States of America has already been fundamentally transformed.

On February 3, not only will Veteran Rosebrock and the American Flag be on trial, but the founding principles and noble heritage of our American Republic will also be on trial.

We the People, hereby appeal to the “Supreme Judge of the World” to bring forth rightful acquittals while liberating, glorifying and pledging allegiance to the Flag of the United States of America, and to the Republic for which it stands, one Nation under God, indivisible, with liberty and justice for all.

About the author:  Ted Hayes, aka “Mr. Patriot,” is a leading Civil Rights activist who is internationally recognized as such for the nation’s homeless peoples, as well as US Military Veterans entrapped in homelessness.  On November 8, 2015, Ted was also cited by VA police for displaying two American Flags on VA property and his Flags were confiscated – one 13-star American Flag and one 50-star American Flag – both of which are emblazoned on the Official Seal of the Department of Veterans Affairs. No court date has been set for his trial.