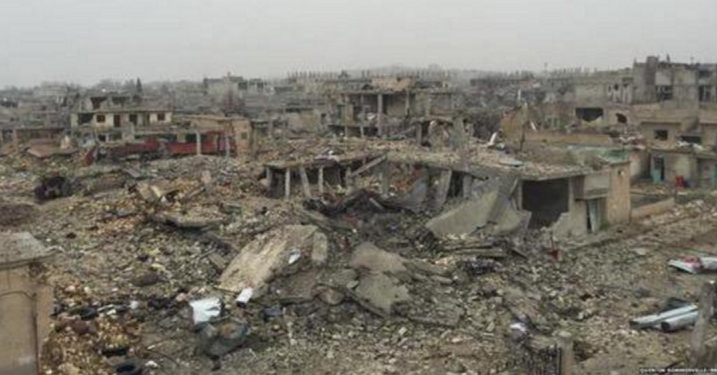 TEHRAN (FNA)- The Syrian army and popular forces’ failure to free the two towns of Fuaa and Kafraya in Idlib province from the terrorists’ hands will lead to the freezing of tens of thousands of the people holed up in those mountainous regions in this cold winter weather.  The video below from September 2015 shows US backed FSA forces using chlorine and mustard gas shells manufactured in Turkey:

Field sources reported that the Syrian army forces have now been stationed in a region 17km from Fuaa and Kafraya, adding that if they fail in their efforts to retake the two towns, there is a possibility that their besieged residents will freeze to death given their unpreparedness for the cold season.

Given the right siege on the two towns, people in there are much likely to starve to death as the latest reports said many have already died of hunger, while many more are feeding on herbs, grass and tree leaves.

A similar situation is also seen in Nubl and al-Zahra towns in Aleppo.

This is while the Arab media, specially al-Arabiya and al-Jazeera, have kept their eyes closed to the situation of the Syrian people in the four towns and are making their utmost efforts to make the world hear the voice of 1,000 terrorists in the town of Madaya, Northwest of Damascus province.

The siege of Fuaa and Kafraya has entered its tenth month while the terrorists have killed 600 Shiites in these two towns and prevent delivery of food and medical aid to their residents.

Nubl and Al-Zahra in Northwest of Aleppo province have also been surrounded by terrorists for years now and people have been dying of hunger in there too.

After the terrorist groups besieged and prevailed over many regions in Idlib in Northwestern Syria in late March 2015, the two Shiite-populated Fuaa and Kafraya towns in the Northern parts of the province came under a tight siege by the terrorists.

The siege was accompanied by massive and continued missile and rocket attacks on the city which destroyed food and medical warehouses and the terrorist groups, specially Jeish al-Fatah, attempted to keep people in the two towns hungry deliberately and based on a plan.

The terrorist groups’ pounding of the two towns destroyed their infrastructures and public centers, and the only water treatment plant of the region as well as the power grid and agricultural structures were also shelled.

The terrorists’ extensive attacks have killed and wounded hundreds of women, children and the elderly. The injured ones in the two regions are still being treated without Anesthesia due to the lack of drugs and equipment; patients are in need of the most trivial forms of medication for, for example, their children’s diarrhea problem.

The terrorist groups don’t allow the residents of Fuaa and Kafraya to receive humanitarian aid and their ringleaders still provoke their forces to attack the Shiites and set fire to their houses. People in the region have been feeding on herbs, plants and tree leaves for months. But it’s winter now and they can’t find anything green to fee on.

The situation in Nubl and Al-Zahra in Aleppo province is much worse than this as they have been under siege by the terrorists for nearly four years now. Tens of people have died of hunger and lack of medicine in these two Shiite-populated towns.

But the Saudi and US media outlets have always kept mum about these towns, and they, instead, release fake images to claim that people in the town of Madaya in Damascus province are starving under the government’s siege. And such lies come as the terrorists have seized the food and medical aid sent for the people of Madaya to rally international support to pressure the Syrian army to lift its siege of the terrorists.