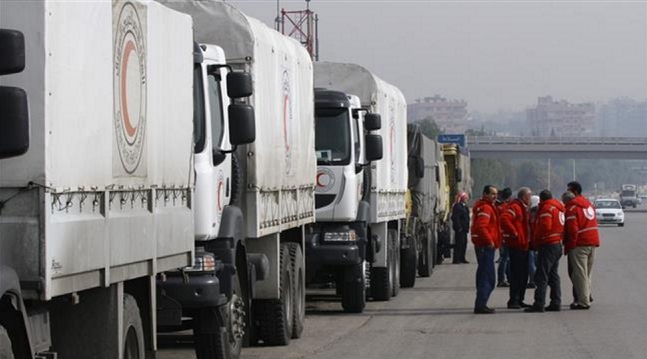 [ Editor’s note:  US backed terrorists aided by the Syrian Human Rights Observatory and misleading press stories have agreed, in order to save their own skins, to allow aid to reach the starving population of Madaya.

Previous aid convoys, enough food to last well into summer, was stolen by the FSA and al Sham terror groups and trucked into Turkey where it was sold to UN authorized refugee aid NGO’s, loaded onto trucks carrying TOW missiles, and delivered to ISIS in Iraq. What is it Jim W Dean says?… Gordon Duff ]

Trucks carrying humanitarian aid have finally entered three besieged towns in Syria as part of an agreement between Damascus and the militants to allow delivery of desperately-needed food and medicine into the areas.

Witnesses said on Monday that a convoy was allowed into Madaya just 24 kilometers (15 miles) northwest of the capital Damascus after government forces was ensured that a separate convoy will enter Foua and Kfarya, two rural towns in the northwestern Idlib Province, which have been under siege by the militants.

Syria’s official news agency, SANA, said earlier in the day that the trucks had set off from Damascus and reached the outskirts of the three towns. The delivery is part of a deal sealed last week between the government and the militants and sponsored by the United Nations.

Sources said 40 trucks were set to reach each of the two locations in the northwest and southwest of Syria, carrying enough supplies to last a month.

Reports have emerged over the past few days claiming that several people have died of starvation in Madaya, most of them patients. Pro-government sources have rejected the claims, saying militants in the area have withheld food from needy citizens.

Residents of Madaya have told journalists that anti-government militants fighting inside the town hoarded a previous consignment of aid in October selling them to residents at exorbitant prices.

The situation in Foua and Kfarya could be as dire as Madaya, although media have barely covered the siege story of the two places, instead focusing on Madaya which has been encircled by government forces and allies.

The deal to allow humanitarian assistance into the three Syrian towns comes two weeks before a round of peace talks between the government and the opposition are scheduled to take place in the Swiss city of Geneva.