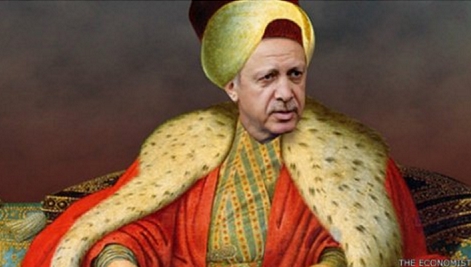 VT Ankara – Turkish Head of State Tayyip Erdogan wants to control everything, and his delusion, deceit, self-centredness, paranoia and fundamentalism have turned him into a tyrant. Like all religious zealots, he is “the chosen one” and his main mission is the destruction of Ataturk’s secular Turkish Republic.

In its place, he wants to establish an Islamic State, a magnificent neo-Ottoman Empire complete with Caliphate and Sharia with him as Sultan and Caliph.

But who can blame the man? His flock has elevated him to Holy, to Mahdi and even to the level of the Prophet himself. His head in the clouds, all the way to Allah, Erdogan has the world at his feet!

So exactly how far does his ominous grip over Turkey reach? Even though his current position as Head of State is largely symbolic with well-defined Constitutional boundaries, he exerts full control over the State mechanism. Furthermore, he commands the public arena with his network of cronies in the private sector and in NGO’s.

Personally hand-picked by Erdogan, the ruling AK Party MP’s do his bidding in Parliament

He dominates the Legislative Branch with his AK Party majority in Parliament, choking and bypassing the opposition to pass laws to suit his needs or even to save his skin. Party MP’s are hand-picked by Erdogan and risk being ostracised or worse for going against his will.

Of vital importance, Erdogan controls all the state auditing mechanisms that should be independent according to the Constitution. Equally important is his full control of government contracts, which usually end up with his business associates.

He controls the state intelligence service MIT with his main man Hakan Fidan, who is a pivotal agent for the US/Israeli “Greater Kurdistan” Kurdish Corridor (from Iraq to the Mediterranean through Syria) in the Greater Middle East Project.

All other intelligence services including military intelligence have been attached to the MIT with new laws. Erdogan also appoints and controls all regional Governors, State Prosecutors and regional state personnel, most of whom willingly do his bidding.

Groomed by others, Erdogan’s “Dark Lord” Hakan Fidan is in charge of intelligence in Turkey

Erdogan holds an iron fist over the Executive Branch, nothing moves in the Government without his blessing all the way up to Prime Minister Davutoglu and sycophancy (butt-kissing) is a sure way to gain his favour. He personally picks the Ministers in the Government and the directors of key offices. The penalty for losing favour can range from immediate dismissal to being ostracised from power and money circles.

Erdogan happily shared the Judiciary Branch with Fethullah Gulen, his mentor and long-term ally, until the CIA and the Gulenists came after him in December 2014 with proof of his grand corruption empire. Erdogan took his revenge by passing a few laws and turning the Judiciary on its head, branding Gulen and his movement as “terrorists”, and weeding out the Gulenists and all other opposition while replacing his own people.

He now controls the judiciary all the way down from the highest Constitutional Court and more importantly he controls all the judicial election-nomination-dismissal mechanisms.

The Police Force was another Gulenist stronghold until the fallout, and Erdogan has been cleansing Gulenists and other opposition from the Force for some months now. Needless to say, all vacant positions are quickly filled by Erdogan loyalists. Erdogan’s Police Force is brutal in its operations and the State often protects police officers who seriously violate human rights.

The Turkish Armed Forces pose somewhat of a problem for Erdogan despite the CIA-Gulen-Erdogan conspiracy that began in 2002 to break its back, resulting in the unjust dismissal of its top generals and admirals. He is now going after Gulenists in the Armed Forces and will most likely also target pro-Republic officers that are likely to cause trouble in the form of a military takeover.

Erdogan has extensive power over the Turkish Jandarma (gendarmerie policing rural areas), which was recently separated from the Turkish Armed Forces and attached to the Ministry of the Interior.

On a regional level, Erdogan also controls a majority of Turkish cities through the Mayors elected from his AK party who have the full financial backing of the State. Erdogan also controls the regional and municipal bidding mechanism, handing out contracts to his cronies on a regular basis. Those unfortunate non-AKP Mayors get little financial support from Ankara, they are bombarded with a range of state audits and mud-slinging is standard procedure.

Erdogan dominates politics in Turkey, using the opposition leaders as whipping boys at every occasion. The general incompetence and consecutive election failures of the opposition parties gives him plenty of opportunities. The opposition is further hampered by the feeble media coverage from the remaining free outlets and the slanted rhetoric of the Erdogan media. Opposition party voter bases are displeased by this general weakness and want change.

The State Media is Erdogan’s public propaganda machine, and he also controls the State commissions from censorship to penalties using all his powers to silence the private media. As far as the private media is concerned, there is but a handful of free TV channels, newspapers, magazines and radio stations left speaking the truth, but their voice is drowned out by the blare of Erdogan’s massive private media propaganda/manipulation machine. Opposition media members face jail sentences, and media bosses face astronomical fines and even face sequestration of their assets.

Erdogan casts a long shadow in the business world as well. During his rule, hundreds of pro-AKP businesses sprang up and flourished while scores of other SME’s went under. He uses the State and Judiciary system as a weapon against those who dare oppose him. Multiple audits from the Ministry of Finance are common and may lead to unmerited fines or sequestration of assets depending on Erdogan’s displeasure.

The multi-faceted business enterprises of Erdogan’s family, his business associates and others in the inner circles are thriving beyond expectations. They are supported by new laws that either mask or legitimise corruption and illegal activities, while State banks are often used to provide huge funds without guarantees.

Erdogan has considerable sway over the Turkish Trade Unions, having placed his own people at the highest levels in a range of Union Federations. In addition, laws were passed in Parliament to bypass and silence free trade unions with technicalities and representation ratios.

An ex-player himself, Erdogan pulls the strings behind Turkish soccer with his people in the Turkish Soccer Federation and multiple first league teams, with an unbounded appetite for more. Since all sports in Turkey are regulated by the Ministry of Youth and Sports, his reach extends to other sports federations and sports activities in general.

Despite having said that the “social media is the biggest trouble for society”, Erdogan is highly active on Facebook, Twitter, Instagram and other sites. He has an extensive social media network dubbed the “AK Trolls”, that actively creates pro-Erdogan hype and pounds the Internet with propaganda.

However, when something circulates online such as the voice recordings of his corruption, he is swift to take legal action by censoring news and restricting access to these sites.

So does this sound like one step away from absolute power? Erdogan would have the world public believe that Turkey is an “advanced democracy”. He fervently denies being a dictator, but his actions and the range of his grip speak otherwise. Ironically this is still not enough and Erdogan is after a “Supreme Presidency” with powers befitting Ottoman Sultans – the ultimate power of life and death over everyone.