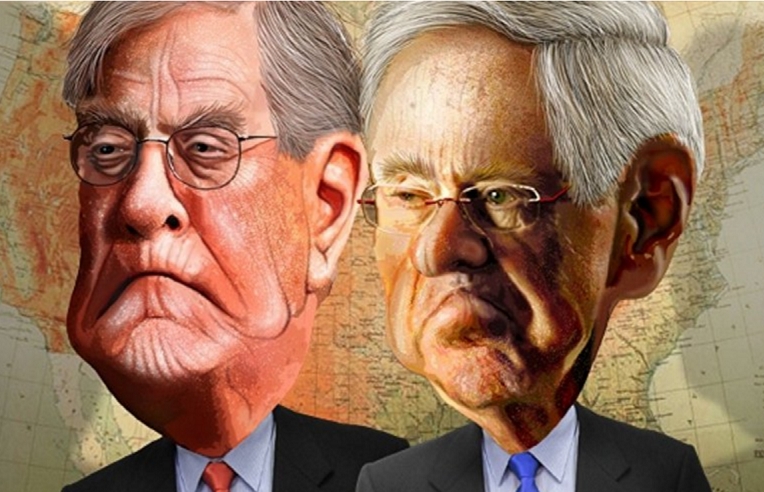 Editor’s note: Compared to whom the Koch Brothers are in bed with now, a family deal with Hitler “back in the day” is a joke. We still like airing things like this though. Suffice to say, Hitler would have stayed away from the Koch family had he known more about them, fearing for his reputation.

Newly released information has revealed that the father of the billionaire Koch brothers helped to construct a major Nazi oil refinery in a business transaction personally approved by Adolf Hitler.

In a new book titled Dark Money, Jane Mayer of the New Yorker dives into the history of several well-known conservative and highly political families. A large portion of the book focuses on the Koch family, and the fortune that Charles G. and David H. Koch inherited from their father, Fred C. Koch.The book details a business venture in which the elder Koch was hired by the Nazi regime to build critical infrastructure.

“One venture was a partnership with the American Nazi sympathizer William Rhodes Davis, who, according to Ms. Mayer, hired Mr. Koch to help build the third-largest oil refinery in the Third Reich, a critical industrial cog in Hitler’s war machine,” the New York Times reported.

The Koch brothers have reportedly not read the book, but are essentially pre-emptively condemning it. The father’s investment in and profit from the fascist regime is not mentioned in an online history approved by Koch Industries.

“If the content of the book is reflective of Ms. Mayer’s previous reporting of the Koch family, Koch Industries or Charles’s and David’s political involvement, then we expect to have deep disagreements and strong objections to her interpretation of the facts and their sourcing,” Ken Spain, a spokesman for Koch Industries, told the newspaper.

The book also contains details from William Koch, the socially liberal twin brother of David, regarding a legal battle within the family over ownership of Koch Industries.

William recalled participating in an attempt by Charles and David to blackmail their brother Frederick to give up his stake in the company by threatening to inform their father of Frederick’s homosexuality.