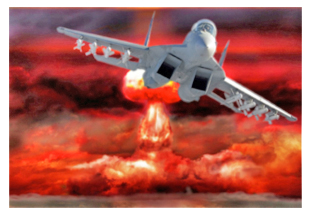 Preston James recently wrote an article for VT about the Russians and Chinese possibly having ET help, giving them their advanced technologies. So I am going to explain where, and from Whom that technology is coming to them, and most importantly: WHY.

Their advanced technology is coming from Him. So the question now is: WHY?

The British and Anglo-Saxon, Celtic, Scandinavian Americans are from the “10 Lost-Tribes of Israel,” who made a Covenant/Contract with God at Horeb in Sinai, to be His servant demonstration people to the rest of the world, of how wonderful it is to live under God’s Perfect Royal Laws of Liberty and receive His Blessing, for doing so.

However, the UK and the USA have never kept your side of the Covenant/Contract, and now the penalty-clauses/curses are in effect.

Not only have you not kept the Covenant/Contract, neither the Old nor the New Covenant, you have rebelled against Him and driven Him out of schools and your lives, and replaced Him with Lucifer/Satan His enemy. The music and film industries are testament to this truth, with artists openly stating that they have sold their soul to the Devil, for worldly, temporary fame and fortune, thus encouraging their fans and others to do the same. You worship them as idols, instead of Him.

You even have popular TV programmes called “American Idol”, to shove it in His face, with people striving to become your new idols. You have music idols, screen idols, sports idols in defiance of God. You have legalised sodomy and have elected sodomites and have them ruling over you in the White House, instead of Christ, in defiance of God.

During the time of your “witnessing” for Him, translating the Bible into every human language and spreading it around the world, He protected you, as He promised to do.

The Four Horsemen of the Apocalypse and The Two Witnesses

God has always defended you, until now, because of His Promise to Abraham, but that promise has already been fulfilled, so has now expired, and He is going to punish you for your idolatry, and defying Him, rejecting Christ as your King, breaking His Commandments and your Covenants with Him, to be His servant demonstration people — not a master race — to the rest of the world, about how wonderful it is to live under His Commandments and Perfect Royal Law of Liberty, and His Blessings that accompany obedience.

Christ, not Elizabeth, is your rightful Sovereign. Many Americans say, “No king, but King Jesus”, but do not obey him and fight to put him on his rightful British Throne, or even into the White House.

“On The Way To Emmaus Again”

“The Fight For The Kingdom And Justice For All”

During the previous two World Wars, and previous wars, He sank the Spanish Armada that Sir Francis Drake mopped-up after, and gave the British and Americans the best weapons’ technology with which to defeat their enemies, but now He is giving it to Russia, China and Iran instead, so that they will win WW3, and the UK and USA will lose, as punishment for your crimes against Him.

During WW2 for example the head of the German Luftwaffe was asked by Hitler, what he could get him, to win the air-war, and he replied: “Some Spitfires”, much to Hitler’s chagrin.

Look at the Joint Strike Fighter F35 piece of ridiculously expensive junk, and compare it to the amazing Russian and Chinese planes. The American designer of the F15 and F16 has said that the F35 is the worst plane the US has ever designed, and the F22 is not much better.

Here’s what the UK Daily Express wrote about it:

Here’s what the impartial Australians have said:

Here is almost an admission by the Americans that they will lose:

There’s also the ridiculously expensive USN stealth ship that some say they dare not take out to sea, because it would capsize and sink.

Then there’s the recent incident in the Black Sea, where the latest Aegis Class missile destroyer, the USS Donald Cook (Donald Sitting Duck would be more appropriate) was left helpless by a single unarmed Russian SU-24 tactical fighter-bomber, that disabled all its defences and teased and mocked the crew; who were mucking themselves; by flying over it 12 times, showing that it could easily have sunk it, and them.

Many of the sailors then resigned from the US Navy.

“What spooked the USS Donald Cook so much in the Black Sea?”

The banksters are desperate to start WW3.

If you want to survive, you NEED to study, digest, and LIVE: The Way home or face The Fire, the title of which is self-explanatory, reinstate God and Christ as your King and His Perfect Royal Law of LIBERTY and the Commandments and become a light to the very dark World.

Your ONLY hope, as We’ve been telling you, is to stop your idolatry and start to listen, and do as you have been commanded to do by God, and return to His Law, if you want His protection, because the UK and USA and allies will be defeated, and literally become slaves – for the third time (Egypt all 12 tribes; Assyria 10 tribes/Babylon 2 tribes and all 12 tribes including you, again soon) for those who are not killed off during WW3.

No-one else is going to be able to help you against the Luciferian/Satanists. No-one!

See: “The Four Horsemen Of The Apocalypse And The Two Witnesses”

We have been telling you this for millennia, but you obstinately ignore and reject Our advice, in favour of the sweet sounding lies and delusions from self-seeking politicians, and so-called priests, also exactly as prophesied in the Bible.

See: “The TRUTH about Rabbis; Priests and Imams”

Are you ready to change your ways yet, and accept Our help? You’re running out of time. We have already given you the solutions. You need to study and apply them.

See: “The Fight For The Kingdom And Justice For All”

Victory is Always the Goal of War

Russian and Chinese military doctrines rely on willingness to sacrifice millions of their own citizens, for the sake of victory. Their generals obviously have to consider the possibility of war with the Western nations. Russia and China have to work with the understanding of their specific conditions, and their conditions dictate that a victory means using nuclear weapons, since using only conventional weapons is unlikely to result in a quick and decisive victory.

The overall propensity of Eastern weapons’ systems to use fewer electronics; the high probability of using nuclear weapons on the tactical level; and the fielding of direct-energy weapons; give Eastern militaries an advantage over the Western nations. Russian military doctrine is very explicit about using nuclear weapons.

Russian weapons’ systems (which are typically copied by China) are designed for nuclear war, which means relying as little as possible on electronics, because of the EMP-effect of nuclear weapons.

Western weapons’ and logistics’ systems have become increasingly dependent on electronics, since the end of the Cold War, making them more vulnerable to nuclear and direct-energy weapons.

Russia is also actively fielding weapons designed to specifically target electronics, like those used to disable the USS Donald “Sitting-Duck” Cook. The military advantage afforded to Russia and China by using nuclear weapons; combined with the fact that these nations have already decided the human costs of such a war to be acceptable; mean that the risk of nuclear confrontation, in response to Western aggression, is increasing.

The ONLY Survival-Plan is The Way home or face The Fire – the title of which is self-explanatory.