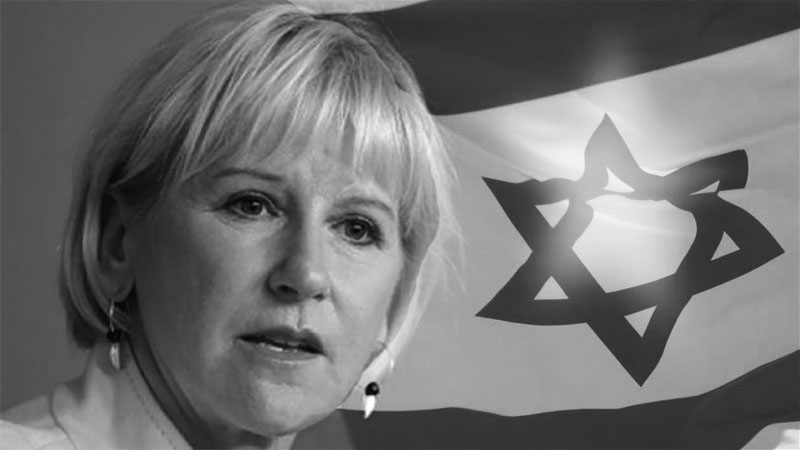 Hooray for Margot Walström! I’m starting to think the Swedish foreign minister perhaps all along, out of a sense of humor, has been dishing out public comments deliberately designed to tick the Israelis off…

Back in November Walström triggered Israeli indignation when she suggested that the Jewish state’s treatment of Palestinians might be a factor in the spread of takfiri jihadism and that it could have conceivably played a role in the Paris terror attacks.

Then in December, Israeli officials blew their lids once again when she made the charge that Israel had carried out “extrajudicial executions” of Palestinians.

Now here we are in January and Walström has hit the Zionist hot button for a third time, causing Israeli officials to gnash their teeth over her call for an international investigation into the aforementioned extrajudicial killings.

“It is vital that there is a thorough, credible investigation into these deaths in order to clarify and bring about possible accountability,” she insisted.

Walström, of course, is smart enough to know that Israel has the political muscle to crush any investigation, either in Geneva or at the UN, for it has done such before, and I’m guessing she doesn’t have any realistic expectation things will go much differently this time. So why is she issueing such a call? The only answer I can come up with is the satisfaction to be derived from seeing all the mounds of Zionist dander raised.

Maybe it’s instructive also for us to look at the escalating heatedness in the reactions voiced over Walström’s comments over the same time period.

Back in November, when the official was asked whether or not she was concerned over the possible radicalization of young Swedes who might be tempted to travel to the Middle East and join ISIS, she responded:

Clearly we have a reason to be worried not only here in Sweden but around the world because there are so many who are being radicalized. Here again, you come back to situations like that in the Middle East where not least the Palestinians see that there isn’t any future (for them). (The Palestinians) either have to accept a desperate situation or resort to violence.”

Then in December, when out came the comments about the extrajudicial executions, Benjamin Natanyahu seethed that the remarks had been “scandalous,” while Deputy Foreign Minister Tzipi Hotovely deemed it a “defamation of Israel” and charged Sweden with crossing “all red lines” in its relationship with the Jewish state.

Now we come to the latest remarks–the call for the investigation–and clearly the Israelis are seeing red.

A formal statement from the Israeli Foreign Ministry labels Walström’s call for an international investigation “irresponsible and delirious,” while Hotovely herself has jumped back into the fray, accusing the Swedish foreign minister of “folly and diplomatic stupidity” and announcing that “Israel will close its door to official visits from Sweden.”

More fury and eternal damnation came from Cabinet minister, Yuval Steinitz, who accused Walstöm of “being pulled after an anti-Semitic sentiment”–which presumably is his way of  calling her an anti-Semite–while perhaps the most fustian response of all came from the former foreign minister, Avigdor Lieberman, who suggested that Walström might be planning to “physically join the Palestinian terrorists and stab Jews” as her next step.

“We need to hope that this will not happen,” Lieberman asserted.

I don’t know how Walström’s comments are playing out with the Swedish public, but they certainly are winning her lots of admirers in America.