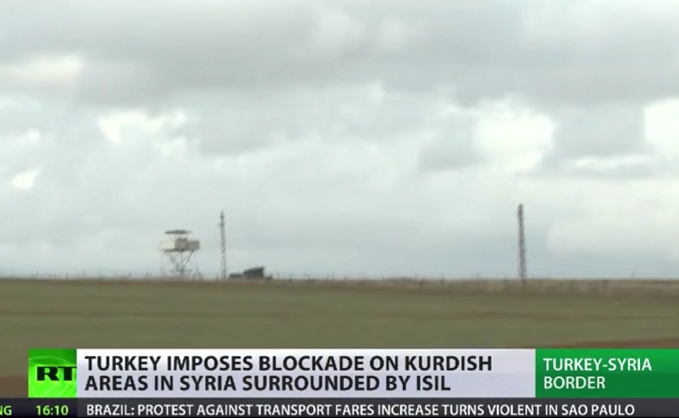 The Turkish border with the Kurdish territories in the northern Syria, which stretches for 750 kilometers, has been fitted with two layers of barbed wire, a huge minefield, and sniper towers at regular intervals. It has only two border crossings that are closed most of the time.

“They [Turks] do not let anything across: neither food, nor humanitarian aid, nor medicine. They only let returning refugees cross,” Hadir Mustafa, the head of one of the border crossings on the Syrian side, told RT.

“The Turkish soldiers do not cooperate, they are aggressive and hostile. They push, hit people and tell them to never come back,” he added.

Murad Gazdiev reported from the border that Turkish border guards had refused to let an ambulance cross the border that was transporting a man critically injured in a terrorist act in a nearby Syrian Kurdish town, saying they needed to receive permission from Turkish provincial authorities first.

Apart from maintaining the blockade, Turkish snipers on towers also target civilians on the Syrian side. They recently shot and killed a Kurdish schoolboy, who was trying to cross the border in order to find work in Turkey.

“The Turks shot him 70 meters from the border, on the Syrian side. I saw the place myself,” the boy’s father told RT.

On Sunday, a 16-year-old girl was also shot dead as she was trying to get to Turkey from Kurdish territories in Syria, while others from her group were injured and had to be treated for gunshot wounds.

The Turkish blockade of Syrian Kurdistan is “total,” Gazdiev reports citing the locals.

“The large part of what we grow here we throw away because we can’t sell it outside,” a Kurdish fruit and vegetable seller named Beze told RT, adding that it is easier to smuggle goods through IS-controlled territories that to transport them through the Turkish border.

“Things that do not grow here also have to be smuggled in. By the time they get here they cost ten times as much,” Beze added.

At the same time, the Turkish border with jihadist-controlled territories in Syria remains open. Weapons, fighters and goods flow freely through checkpoints manned by Islamic militants.

According to the documents that were handed over to the Guardian by the Syrian Kurdish forces, Islamic State (IS, formerly ISIS) ran the operation through the border town of Tel Abyad. The seven manifests seized by the Kurds contain the names of 70 people – men, women, even infants – that had crossed into the town in the period from December 2014 to March 2015.

The papers all bear IS markings associated with the group’s ‘department of immigration’ and ‘department of transport’. All appeared to be traveling from IS-held territory.

To verify the authenticity of the passenger manifests, the Guardian revealed that the Kurdish forces had contacted an IS expert, academic researcher Aymenn al-Tamimi.

“The documents… coincide with other documents illustrating daily bus routes within Islamic State territory. Though private companies provide the actual transportation, the Islamic State bureaucracy is responsible for authorizing and overseeing the routes,” he said.

Turkey has long been saying that controlling its entire 566-mile (911-km) frontier is unrealistic. But the NATO member continues to face pressure from the international community over the ease with which IS fighters have been crossing through it. The Tel Abyad border stretch stayed open until the Turkish closed it in June, following a Kurdish victory over IS in the area.

A Turkish government official responded to the Guardian’s claims, saying that every person arriving to Turkey from IS-controlled territory is automatically classed as a ‘foreign fighter’, but added that he saw no evidence that the crossings had been made through the legal border, or if some other means was used.

The official said that in the period from January 2014 to November 2015, Turkish security forces had arrested some 207,437 people crossing over illegally. He added that Turkey hosts over 2 million Syrian refugees as well, as part of its ‘open door’ policy.

Also talking of a moral responsibility towards refugees was Prime Minister Ahmet Davutoglu, who in early December said that “Keeping the entire border with Syria [closed] may come on the agenda as a project, but then what will you do about transiting refugees? We have a moral responsibility along this 911km-long border and that is to accept refugees.”

Nonetheless, adding to the numerous allegations of lax border control is the view that Turkey has always known full well who crosses its borders, and where. The latest support for such claims came from a captured terrorist from the Turkish city of Adiyaman, who spoke to the news agency Sputnik about the lucrative oil trade that IS engages in. He confirmed that scores of oil trucks continue to cross into Turkey unabated.

This adds to earlier claims by Russia, and then Iran, that Turkey’s business with IS is prospering. Following in Moscow’s footsteps, Iran in early December said it was in possession of photo and video evidence of IS oil entering Turkey in trucks.

Earlier that week, the Russian Defense Ministry released maps and satellite imagery it said proved that Turkey is the main consumer of oil smuggled out of Syria and Iraq by IS. The ministry also claimed that the Turkish president and his family are involved in the criminal dealings.