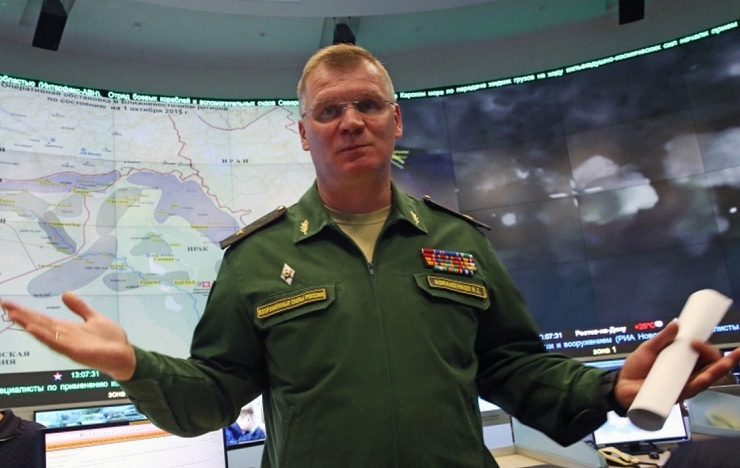 TASS/. The Russian Defense Ministry may begin publishing data on the results of airstrikes of the international coalition in the Middle East, in order to disprove the accusations alleging that the Russian military aim at civilian targets, ministry spokesman Igor Konashenkov said on Friday.

General Konashenkov recalled that at the end of last year the ministry said that it had the sufficient amount of information on the results of the work of the countries of the anti-Islamic State coalition in Syria. The Defense Ministry said that these results did not always correspond to the stated objectives.

“Frankly speaking, we expected our colleagues not only to pay attention to this, but also to draw certain conclusions. Therefore, to disprove further rumours and accusations against us and if our colleagues keep silent on the results of their bombings in Syria, we will ourselves have to inform the public of these facts,” said the Russian official.

According to Konashenkov, in the area of Aleppo where a school was allegedly destroyed by an airstrike more than 10 aircraft of the coalition, as well as attack drones were fulfilling various combat tasks on that day. In addition, since December 20 last year to this day the coalition planes have been making sorties and hitting targets in the area of Aleppo practically every day.

“Thus, the question is: which facilities were targeted in that area by the coalition aircraft? Our colleagues continue to stubbornly keep silent,” the Russian defense official said.

Last week, the Syrian Observatory for Human Rights published a report, which accused Russian warplanes of delivering an air strike at a school in the Al-Adzhar populated locality. The number of casualties, according to the Observatory, varied from 8 to 20 people.

“As usual, the report lacked the victims’ names and addresses and did not give the name of the school or its location,” Konashenkov went on to say. “The professional analysis of photos distributed in social networks revealed, judging from the nature of destruction, that the school had been hit by an ‘air -to-surface’ missile, which are used in Syria and Iraq exclusively by the warplanes and assault UAV of the anti-ISIS coalition,” General Konashenkov said.

Konashenkov also said the ministry has found out who is behind the Syrian Observatory for Human Rights (SOHR), which distributes information blackmailing the Russian Aerospace Force grouping in Syria. According to the official, the man moved to the United Kingdom after serving three prison terms in Syria.

“The first throwing-in of false information about claimed victims in the Russian air strikes appeared in social networks and some western media well before our mission in the Syrian Arab Republic began,” he said. “Most information was distributed on behalf of so-called ‘Syrian human rights activists’.”

In “distribution” of the statements made by those “human rights activists” participate, as a rule, some foreign media, which use most often the organisation called the “Syrian Observatory for Human Rights,” with headquarters in the United Kingdom, he said. The defense ministry’s representative said over recent five years the organization’s head and sole employee was the man called Ossama Suleiman, who moved to the UK in 2000 after having served three prison terms in Syria and who took the nickname of Rami Abdurrahman.

Editor’s note:  Rami Abdurrahman is living illegally in the UK, having lied about his legal status and record as a common criminal to gain entry.

“In his many interviews with the western media Abdurrahman, as he now calls himself,  every time stresses all the information he publishes comes to him personally on the phone from trusted sources,” the defence ministry’s spokesman said in conclusion. “Thus, that network of the so-called reporting human activists is active right under the nose of Islamic State and other extremists. At the same time, for some reason, they would not see the atrocities of those terrorists.”

The spokesman also pointed out that the Western coalition considers the death of 49 civilians as insignificant in Syria operation planning while the Russian military excludes such risks in its plans. “Our aviation does not even plan airstrikes on such targets in the event of a threat of civilian deaths.

“However, the Western coalition can just allow itself to consider the death of 49 civilians as insignificant,” Konashenkov said. According to the Russian general, CNN Pentagon correspondent Barbara Starr said that the US military had told her that the American command made decisions on delivering such air strikes on condition that the number of civilian deaths would not exceed 50 people.