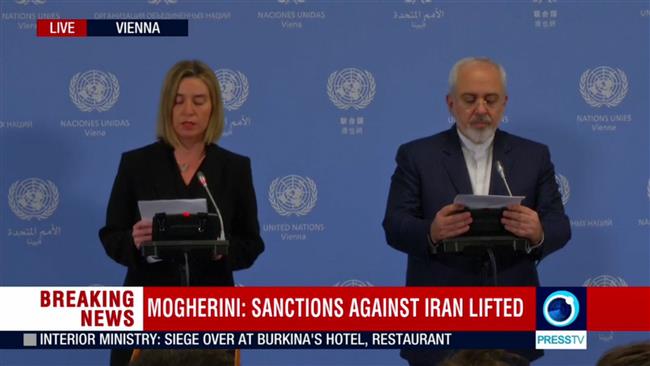 [ Editor’s Note: The Iran nuclear weapons hoax is now carved in stone. The Israelis and their neoCon friends in the US stand guilty of trying to abuse the US military and the Iranian people in a false flag war that they felt they could profit from at the expense of others.

Rather than let this little item be swept under the rug, it should be thrown into the faces of all those that supported the preemptive attack option. They were, and still are, the real national security threat that we faced then and still do. To let them walk away without serious wounds would leave them in a stronger position to work on their next scam.

Our congratulations to all those who labored long and hard to make today’s event happen, including President Obama. And we ask him to step up to the plate as he did on the Iran scam, which he inherited, and wrap up the Syrian debacle and his one Ukraine disaster.

As for Germany and France who guaranteed Kiev’s good faith compliance with the Minsk accords, you have done nothing while Kiev just defecated on them. The special Constitutional status for Donbass, which was agreed to be made permanent, was passed as three-year measure two years ago, and neither of you did anything to right this wrong. Both of you are undeserving to be a guarantor of anything, unless you post a financial bond… Jim W. Dean ]

Sanctions imposed on Iran over its nuclear program are lifted following confirmation of Tehran’s commitment to​ the Joint Comprehensive Plan of Action by the International Atomic Energy Agency.

Mogherini read out a statement in English which was subsequently read out by Zarif in Persian.

“As Iran has fulfilled its commitments, today, multilateral and national economic and financial sanctions related to Iran’s nuclear program are lifted in accordance,” read the statement.

US Secretary of State John Kerry, who is also present in Vienna, confirmed the IAEA’s report, saying that “The US sanctions-related commitments… are now in effect.”

Kerry said the United States would “immediately” remove sanctions imposed on Tehran, “expanding the horizon of opportunity for the Iranian people.”

Earlier on Saturday, IAEA Director General Yukiya Amano announced that Iran had taken the “necessary preparatory steps to start the implementation of the Joint Comprehensive Plan of Action (JCPOA).”

Iran and the five permanent members of the UN Security Council – Britain, China, France, Russia and the United States – plus Germany finalized the JCPOA in Vienna, on July 14, 2015.

Under the JCPOA, limits are put on Iran’s nuclear activities in exchange for the removal of sanctions against the Islamic Republic.