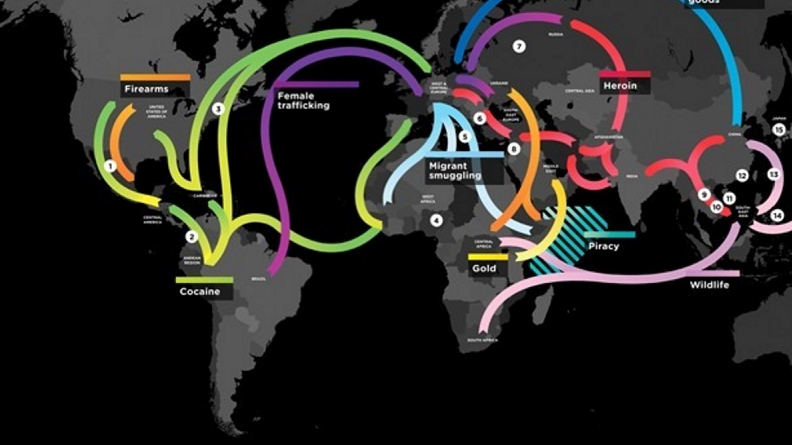 Organised crime is globally linked, sophisticated, legitimised as business and deep into government in most countries

[ Editor’s Note: This is a major piece of work here. Part of the reason we needed someone on the ground in Turkey is to provide some background on Merkel’s wanting to give automatic visas to Turkey. This of course will eliminate border checks on all of these organized crime people throughout Europe.

Does Merkel know this? Of course she does. So why is she doing it? The answer to that I will let you guess.

Does organized crime cut top political and law enforcement in for a piece of the action for protection? And what do all the Intelligence and security orgs do to stop this?

Do they take down the groups they know are funding the politically powerful, or do they eliminate their competition as cover, and effectively ensure monopolies on the illegal trades that fund the real political kingpins, without whose protection the Special Forces people would have all the crime bosses in body bags in a month or two.

As Gordon Duff so loves to say, “Welcome to how the real world works.” And to that I add my, “It’s a nasty world out there”… Jim W. Dean ]

It is no secret that governments often work hand in hand with organised crime, it could be argued that government itself is the biggest racket, and Turkey is no exception to the rule. Regardless of its source, money begets power to corrupt its surroundings.

Consequently, many of the top Turkish serious organised crime syndicates have either family members or their own people in Parliament today.

If we could follow the money from organised crime in Turkey starting from its source and following up through individual wealth, companies and holding groups, the chain will most likely end up in Parliament.

With Turkish Head of State Erdogan’s own intricate crime network represented in even greater numbers, the Turkish Parliament has effectively become a covert hub of illegal activities on a grand scale. Hidden behind the facade of legislative proceedings, such activities are mutually agreed upon and implemented, and if need be they are white-washed and covered-up under the same roof.

Any major action that is not sanctioned by the greater Family is swiftly dealt with the full force of the State and ironically provides great statistics for the “fight against organised crime”.

There are currently two main competing factions within Turkish serious organised crime: the Black Sea Mafia to the North and the Kurdish Mafia to the East with Erdogan as the Capo dei Capi. The Kurdish Mafia is a relative new-comer but has taken the lions share in the amalgamation that is called the Turkish Mafia.

Up until the 1990’s it was mainly composed of a dozen families from the Black Sea with a focus on strong-arm methods and contraband goods, and less of an interest in drug running. With the PKK gaining financial power in the 90’s through extortion, human trafficking, and especially drug and arms running in Europe, the Turkish Mafia has now effectively become the PKK/Kurdish Mafia.

The links between the state and organized crime became known to the public in the early 1980’s, when the Turkish Intelligence Agency MIT set out eradicate the Armenian ASALA terrorist organisation that had been assassinating Turkish diplomats and bombing Turkish targets for a decade.

The task-forces for this job included members of the MIT and Special Forces, along with prominent mobster Abdullah Catli and his crew who were part of the right-wing nationalist movement.

It is arguable whether this group really finished ASALA given its feeble track-record, with more effective actions coming from State elements.

ASALA’s 1983 Orly bombing with French casualties was probably what finished the organisation, but Catli ended up taking full credit to become a public hero and basically getting a carte-blanche for his illegal activities in Turkey.

This later became the norm as the underworld and politics inter-merged, and those in power continued to make use of these elements.

Many underworld names have even been praised at the Prime Ministerial level for their “services to the Turkish Nation” effectively white-washing and romanticising these dark elements in the eyes of the public.

The historic ties of the Black Sea people with Georgia and especially the port city of Batumi extend to the underground world as well.

On a visit to Georgia in 2004, Erdogan stated: “I am of Georgian origin. Our family is a Georgian family emigrated to Rize (Turkish Black Sea) from Batumi”.

Needless to say, he oversees the extended clan in the Black Sea region and makes full use of its connections in Batumi, where the illegal oil trade with ISIS and the Iraqi Kurdistan Regional Government is legitimized.

Shot in 2013, Usoyan ruled over a multi-ethnic organised crime network with ties to the PKK

The PKK and the Kurdish Mafia are connected with Georgia as well. Soviet mob kingpin Aslan Usoyan, a Yazidi/Kurd from Tbilisi the capital of Georgia, is known to have helped the PKK on a number of occasions with the supply of arms and escape routes. It is highly likely that he is acquainted with jailed PKK leader Abdullah Ocalan.

The relationship of the PKK/Kurdish Mafia with international and domestic Russian, as well as Azerbaijani, Chechen and Armenian organised crime blossomed with Usoyan who was affectionately called “Ded (Grandpa) Khasan”, in reference to his old age and his god-fatherly relationship to a range of multi-ethnic organised crime networks.

This working relationship is evident in the low rate of clashes between the Kurdish and diverse Russian groups in the mutual sharing of “business” in Europe and the Americas.

Having escaped death numerous times, Usoyan was killed in 2013 by a contract sniper on his own turf in Moscow where he ruled his criminal empire. His death was generally accepted as part of the infighting between rival groups in Russia, which later got even rougher with the sanctions and the collapse of the rouble in the Russian economic crisis of 2014-15.

It seems that Turkey is the back-yard of regional crime syndicates, simply judging by the number of foreign crime bosses assassinated in recent years. Vadim Ivanenko, a boss from the Crimean region, was killed in the south of Turkey in February 2015. Azerbaijani crime boss and cult hero Rovshan Janiyev, who was among the top suspects for the Usoyan hit, was allegedly assassinated in Istanbul in June 2015.

The south of Turkey is dotted with hotels and clubs that belong to Russian organised crime bosses, who have used the lax laws to launder money by buying up property in Turkey (this is a trend in the Mediterranean as well). Furthermore, news has been circulating since early 2015 suggesting that top Russian mob leaders planned to hold a summit in Istanbul.

Given that the Kurdish Mafia is very strong in these regions and again given the minimal clashes between the two rival groups, we can deduce that they are carrying out activities that complement each other.

The heartland of the PKK/Kurdish Mafia that is the funnel of human trafficking, heroin and arms running through Turkey to Europe

The Worldwide Web of the Turkish PKK/Kurdish Mafia extends far and it is renowned for being numerous and ruthless. As with most international groups, they have transformed themselves into legitimate businessmen even though they keep their strong-arm tactics.

In Europe the more obvious illegal activities have transformed into mostly compartmentalised and legitimate businesses as covers in major cities. London as the centre of serious organised crime activity in Europe for example, is the realm of the Baybasin Clan among other Kurdish groups.

Other big Kurdish clans are spread out all over Europe, staking similar claims and co-operating with each other. Europol ranks the Turkish/Kurdish Mafia among the top crime syndicates in Europe along with the Russians for illicit drugs, human trafficking and arms running.

To the South they have Cyprus as a base for a range of operations including offshore banking and money laundering, which incidentally is one of their principal strengths. To the East they are connected with criminal elements in Iraq, Syria and parts of Iran, all the way to Pakistan and Afghanistan.

They work in close conjunction with South American drug cartels often bartering heroin for cocaine. Even though the Mexican cartels have surpassed the Colombian cartels in cocaine trafficking to Europe, the highly adaptable PKK/Kurdish mafia retains ties to both and commands a sizeable portion of the European cocaine market.

Other highlights from public statements of top Europol officials in 2013:

It should be well noted that Europol has not issued a SOCTA report since 2013, but has focused on Cybercrime in 2014 and 2015 with a dire warning regarding the alarming rise in child sexual exploitation.

There are volumes to be written on the subject of the PKK/Kurdish Mafia, the Turkish criminal underworld, its modern business facades and its consequently legitimized ties to the State.

Yet without a doubt, they all have to bow to the bankers and the Khazarian Mafia who launder their money to the tune of hundreds of billions USD a year and who also control the global money, the governments, the media and the arms all at the expense of the people.

Connect the dots and you will see that that the NWO disseminates the Seven Deadly Sins through organised crime, physically creating “temptation” for luring the ignorant masses to their evil ways.

Monopolising and flourishing on fiat money since 1694, the Bank of England has spawned the Fed and all other Central Banks