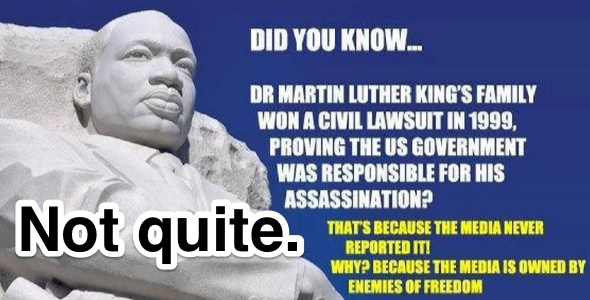 Every year on Martin Luther King Day I experience anger issues. Here’s why:

Sometimes I go out and create a public disturbance:

What really pisses me off isn’t just that the government blatantly murdered Dr. King and got caught.

The maddening thing isn’t just that the mainstream and pseudo-alternative media covered the whole thing up, and are still covering it up, making everyone involved with any such media organization an accessory to the crime (as they are accessories to so many off-the-scale crimes against humanity).

What’s truly atrocious is the mainstream’s hijacking of the story of Dr. King. They have turned a truth-telling fighter for justice into a symbolic “house negro.” Streets are named after him. A holiday is observed. “Nonviolence” (a euphemism for acquiescing to state violence without fighting back) is bandied about.

The ever-richer white/Zionist elite that rules America is using a mutilated version of Dr. King to hide their own fear of poor people, black people, and the truth. The have re-invented Dr. King as a non-threatening national symbol.

They pretend he was shot by a lone nut, an extremist, a “terrorist.” They use his memory to rally the people to the side of lies, injustice and oppression…the side of government, which is responsible for virtually all human-on-human violence, including the “terrorism” it endlessly howls about but secretly commits itself.

The ultimate symbol of this sad state of affairs, I am sorry to report, is President Obama.

Now don’t get me wrong. I actually like Obama personally. He seems like a nice guy – maybe a little too nice, too inoffensive, too compromising.

And that, of course, is how he got the job.

Just as the rich white/Zionist elite wants a castrated 99%.

Obama is the culmination of the neutering of racial and class politics that took the martyred corpse of Dr. King – a real revolutionary who was about to lead half a million people to take over Washington DC and not go home until war and poverty were ended – and mutilated his memory, hacking away at it until it became “symbol of national unity and ‘nonviolence” to be endlessly re-desecrated every year on the third Monday of January.

Obama, the rich white man’s fantasy of a castrated Dr. King, has in turn castrated America. Before his election in 2008, about 100 million Americans knew or strongly suspected that Bush and Cheney had been part of the 9/11 inside job, and were poised to react to the 9/11/2008 economic coup d’état with a REAL occupy movement – that is, a REVOLUTION like the one Dr. King was organizing when he was murdered.

But the biracial castrato in the White House has sung the nation back to sleep.

If Dr. King were here today, he would be working overtime to wake it up – and to make sure that the long-deferred revolution he almost led in 1968 finally happens, by any means necessary, in 2016.