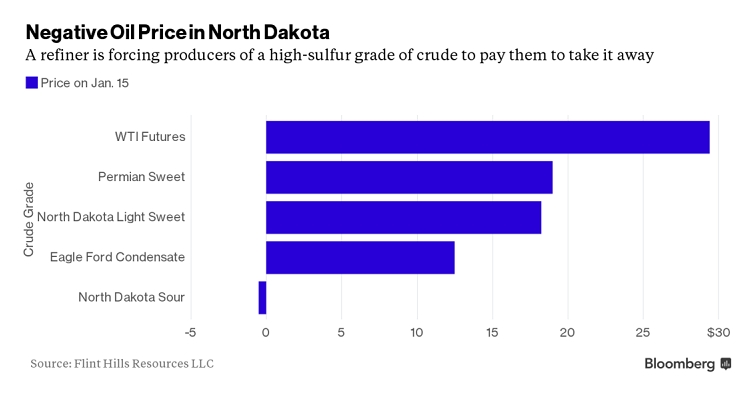 A vendor counts real bills at a street market in Rio de Janeiro, Brazil, on Tuesday, May 12, 2015.

Brazil, which hasn’t issued debt internationally since September as a graft probe unnerved investors, is looking to sell as much as $2 billion of its notes due in 2025, as soon as this month, according to a government official, who asked not to be identified as the discussions aren’t public.

Oil is so plentiful and cheap in the U.S. that at least one buyer says it would need to be paid to take a certain type of low-quality crude.

Flint Hills Resources LLC, the refining arm of billionaire brothers Charles and David Koch’s industrial empire, said it would pay -$0.50 a barrel Friday for North Dakota Sour, a high-sulfur grade of crude, according to a list price posted on its website.

That’s down from $13.50 a barrel a year ago and $47.60 in January 2014.
While the negative price is due to the lack of pipeline capacity for a particular variety of ultra low quality crude, it underscores how dire things are in the U.S. oil patch. U.S. benchmark oil prices have collapsed more than 70 percent in the past 18 months and West Texas Intermediate for February delivery fell as low as $28.36 a barrel on the New York Mercantile Exchange on Monday, the least in intraday trade since October 2003.

“Telling producers that they have to pay you to take away their oil certainly gives the producers a whole bunch of incentive to shut in their wells,” said Andy Lipow, president of Lipow Oil Associates LLC in Houston.