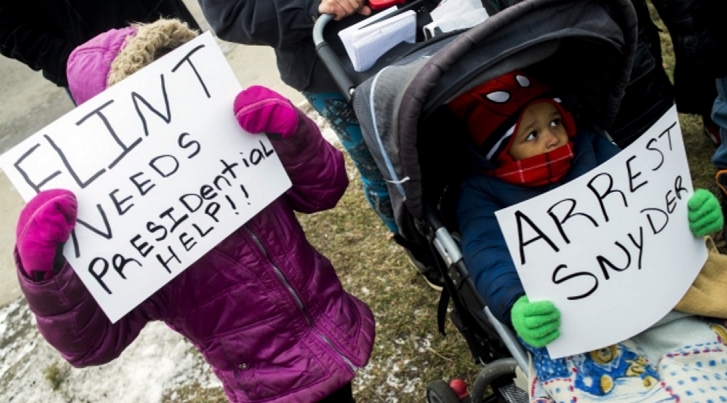 [ Editor’s note:  Again, Russia Today tries to blame the Obama administration for something its political enemy, extremist nutcase Michigan governor Rick Snyder has done.  Snyder, part of the Hitleresque triumvirate of Midwest dictators, Kasich of Ohio, Walker of Wisconsin and Snyder of Michigan, continue their war on veterans, the working poor, pensioners and the elderly and, of course, blacks.
–
The Neocon’s are a new breed, a product of Reagan’s idiocy.  Reagan welcomed a “brain trust” of what he thought were “new conservatives,” converted Bolsheviks, mostly gay, primarily secular Jews, all ready to help America take down Russia, secure the world’s resources and eliminate the last vestiges of political process by impoverishing America’s middle class and destroying America’s industrial base.
–
Industrial workers, according to Reagan, were a threat to America’s security, their love of unions, of social justice and their desire to improve their lot.  Attempts by those of “non-inherited wealth” to gain social mobility was seen as a “share the wealth” threat by Reagan, making him fodder for Bolshevik schemes.

What we are seeing in Flint is very much a part of this, a part of a very large “whole” which includes financial crises, half a dozen regional wars and Europe’s political and social meltdown.

The race war right wing nutcase Alex Jones and the Bundy militants are pushing for isn’t a passing whim, it is something far more pervasive, part of a move toward right wing extremism and radicalization directed against Islam in Europe, Christians in the Middle East and Jews around the world.
It began in earnest here in America with the Jade Helm hoax.  Prior to Jade Helm, we were warned of Russian troops moving across America, tens of thousands, over and over by InfoWars.  Watch RT miss all of it, though we laud them for trying… Gordon Duff ]
____________
–

The head of the Environmental Protection Agency defended the agency’s handling of Flint’s lead-contaminated drinking water over the past 18 months. The Rev. Jess Jackson called Flint’s crisis “a crime scene.”

McCarthy’s announcement comes after Flint’s mayor and the governor of Michigan declared a state of emergency in the city, and just days after President Barack Obama declared a federal emergency over the crisis. Obama ordered federal aid for state and local efforts for Flint but denied an additional request for a major disaster declaration sought by Michigan Governor Rick Snyder.
–
The head of the EPA’s remarks were made as accusations off passivity are being directed at Governor Snyder and the state Department of Environmental Quality over Flint’s drinking water becoming contaminated with lead. The problem began in April 2014, when, in a cost cutting measure under a state-appointed emergency manager, the city switched from Detroit’s water supply to water from the Flint River.
–
Despite the water having high salt content, it was piped untreated into homes and offices. The salt corroded the lead in the pipes, causing the water to become contaminated. Residents then began complaining about dirty water with a bad smell and taste, as high lead levels started appearing in the blood samples of children.
–

The city switched back to Detroit’s water supply in October, but only after months of complaints and protest from residents, who were angry that the government had ignored alarms raised by doctors and scientists. Lead contamination can cause brain damage and other health problems.

An NBC News report from January 8 said emails it obtained showed that high-ranking officials in Michigan were aware of elevated lead levels in Flint’s water six months before the state of emergency was declared.
–
Just how deep the health impacts from the lead poisoning go are unknown. Dr. Mona Hanna-Attisha, a Flint-area pediatrician who forced the state to acknowledge the city’s problems, declared that “all children younger than 6” — that’s 8,657 children based on the US census data – “should be treated as exposed,”according to the Detroit News.
–

The EPA administer said they agency had established a task force of experts to conduct an audit of the state’s water program “to make sure whatever improvements need to be made get made and get done quickly.”

Over the weekend, more than 10 leaders spoke at the Heavenly Host Church of the Harvest church in Flint at meeting packed with over 150 people. They demanded more attention, money, and better solutions. One of the leaders was a long-serving civil rights activist, the Rev. Jesse Jackson.
–

“This is a disaster, not just an emergency,” said the Rev. Jackson, according to the Detroit Free Press. Jackson added the responsibility for the crises fell on Governor Snyder, and said the people of Flint “have been betrayed.” “Maybe they should put … tape around the city, because Flint is a crime scene,” Jackson told reporters after the church meeting.

Also on Monday, the Detroit Free Press reported 60 protesters gathered outside Governor Snyder’s apartment in downtown Ann Arbor and chanted for his arrest.

“Many of us think this governor has committed a crime, and want to see justice for Flint,” said Jan BenDor, who helped organize the protest and led a failed recall effort against Snyder in 2011. “If that whole city could be poisoned, it could happen to any of us.”

Protesters marched from the University of Michigan’s campus, at times blocked passing cars before arriving at Snyder’s apartment, where they marched in a circle, chanting, “Justice for Flint! Arrest Rick Snyder!”
The protest occurred a day before Snyder is due to give his annual State of the State address.
____________