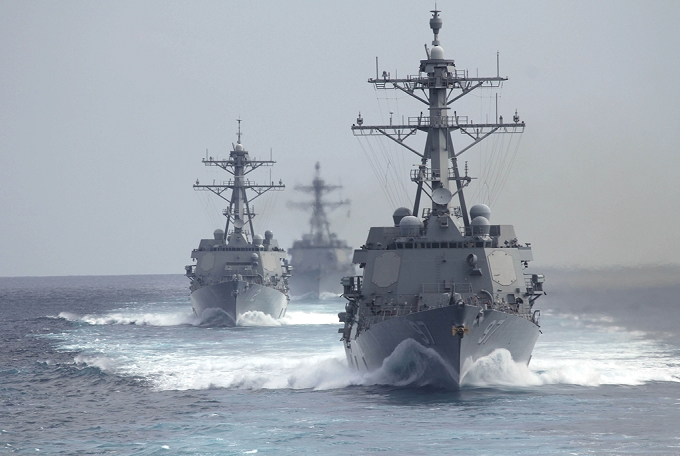 …by Christopher B. Kuch, PhD

Wow, NATO holds another yearly joint military exercise.  Amazing, the U.S. trains yearly with the Arab League.  Wonderful, we train with our Pacific partners annually.  These are impressive for the military to develop strategic coordination exercises, and feel good about our relationships with our allies.  Great for the ship Captains to develop a report with other ally ship Captains and commanders, yet, what about the pilots?

What about emergency landings when their aircraft gets hit?  How many of our allies have first response aircraft carriers?  In an all out war, do they use their limited amount of ships, planes, and mechanics at sea?  This brief paper suggests a need for intense cooperation and training on a daily basis.

Including military allies being stationed onboard U.S. ships-aircraft carriers.  They should be trained in take-off and landing on a massive carrier, and functioning at war onboard our huge combat ships.  This should filter down to other ships such as frigates and destroyers.

Why is this Needed?

An ally is a government that has decided to commit its military to the defense of another ally.  Formerly, NATO was such an organization.  But we have seen this erode into political dissent and refusal to abide by the articles of its inception.  Setting aside NATO, America should look long and hard at its true allies.  There are many new ones in Europe–The Baltics, and in the Pacific.

Most lack a fleet of larger combat ships, specifically aircraft carriers.   Along with very few of them having forward military bases for defense of national interests or offense when attacked.  Only the U.S., The U.K., and France maintain a large foreign base ability to accomplish military defense, deterrence, and attacks.

The yearly training between allies is not enough and should be on-going.  Only by intermixing military operations can this be done.  By doing so, it saves money for each country by having a larger military forward force.  Training every month would be cost prohibitive.

Moreover, we don’t have the resources and units available to conduct these.  However, by not conducting large scale joint military training exercises yearly or monthly, we can easily conduct them daily by simply having joint forces on each other’s ships.

The cost of aircraft replacement is huge and massive (millions per plane).  Sharing the cost of chipping in planes, pilots, and mechanics reduces our overall costs. Our carriers are already there.  Instead of having 8 American squadrons onboard, we can have 6.  The French kicks in one and the Germans kick in the other.  If they don’t want to pitch in, then we can close a few bases in their country, vote no on every issue against them in the U.N., and boot them out of NATO.

If we can’t do that, we can just leave NATO and it will close up shop.  It should be drastically reorganized and some countries should not be in it anyway, but that view might seem radical and unrealistic because of politics.  The author will not mention any countries by name, but one only needs to look at NATO and see who isn’t a strong partner in the fight against the satanic group Daesh and not.

We can also look westward.  Specifically Japan, Australia, and The Philippines. They are more than edgy about China being aggressive in the South China Sea.  Then there is that goofy looking guy West of Japan.  God only knows what he will do in the future.  If he only does one of the plethora of silly things he says, they and us should be more than worried.

A robust forward and mobile airstrip at sea will provide an immediate response should an enemy attack one of our Pacific partners.  We would simply be the base for which they can launch a counterattack.  Then if we get sucked in, we can throw the full force of our extremely powerful naval forces into the mix.  Let’s hope that doesn’t happen in the near future until we get a president and not our oval office emperor.

For eons we have stationed our troops and aircraft overseas in countries that are our allies.  This has been mainly for us as forward defense positions and lesser for the protection of those allies.  We typically pay big bucks for these bases, which is costly for the American tax payer.

It is time for our allies to shoulder the cost of military protection for them and to share our already existing floating bases.  They can’t afford to build them, but by sharing the cost of putting their aircraft and crews on board, we will spend less on the number of squadrons and technicians. This is a win-win solution.

Although we have seen very recently the French take off and land a couple of times on a U.S. aircraft carrier, this is not a new idea*1.  During the past major wars we have always helped out ally nations when pilots went down, or needed rescued in the battlefield.  Likewise, our allies have rescued our pilots and soldiers in distress.  But France is only one country that we can call an ally.

Today we have many other countries that in time of need we can jointly combat our enemies.  What is needed is experience with a one on one basis, and actually being stationed aboard each other ships.  If a major war breaks out, we can’t afford to be in a position that only one ship has some soldiers and another with aircraft.

What the author suggests is agreeing on a partial squadron of bombers and fighter jets from very close allies to be stationed on our aircraft carriers and larger combat ships.  They provide the planes, pilots, commandos, and mechanics to maintain them.  We interact daily, become friends, and learn about their language, phrases, and our different accents.  Lastly, we develop that necessary comradeship that is needed in a time of battle.

Coalition pilots could come to the U.S. and practice take-off and landings on painted mockup aircraft carrier landing decks on our military bases.  After successfully gaining the ability to take-off and landings in very short distances they could practice on one of our carriers that is in port for refueling, refurbishment, and crew time leave. The time spent during training at a base and practicing on a carrier which is in port will also help them get accustomed to our language and idioms.

Once out at sea on a tour of duty, they can continue to practice take-off and landings, while communication gets better each day.  A natural bond will emerge between the pilots of the different coalitions which someday might be helpful in the continuation of the WW3 Radical Islamic War.

The whole purpose of this training and assignment is if a pilot is in trouble he or she can land safely on one of our carriers if it is close without ditching and losing a multi dollar plane.  Also, we might have aircraft losses and our coalition partners can easily send replacements because they already know how to land safely.

Although modern military coalitions focus on coordination of defense and offense strategies, they are based on separate clusters of military units.  One country has a base with only their forces, another with theirs.  Military ships have just their sailors and pilots.  While our yearly training exercises helps keep us coordinated logistically, in our naval units only the ship’s captains get exposed to different countries military commanders.

The focus of this paper was to suggest the need to actually station pilots, planes, and mechanics from other countries on U.S. Carriers. This also might be at the smaller ship sizes such as destroyers and frigates. They would replace some of our crews giving us a chance to send them home for leave or stateside training.  We would develop strong relationships and gain a better understanding of our true allies.

The pilots and crews would gain valuable skills during this time and might even enjoy it.  In most of our ally’s militaries they don’t have the awesome aircraft carrier.  Our sailors and flight crews would enjoy the different cultures from their counterparts—yes British culture is a little different than us.  We would in the end forge that necessary bond which is needed in time of war.

Our military costs would be reduced by saving money for pilots and crews. We would have our additional pilots and crews available for other assignments.  The military could consider temporarily assigning our sailors to our coalitions ships.

It would send a signal to Radical Islamic Muslim terrorists that we are not only on the same page, but on the same ships.  We are not just friends; we are everywhere together with huge hammers.  And we shouldn’t play “whack a mole”, we must play decimate the mole colony.

Dr. Kuch holds a PhD, MA, and MS in criminal justice.  He is a four year Vietnam Era Navy Veteran. He lives in Istanbul, Turkey and is on the adjunct faculty at Galatasaray University.