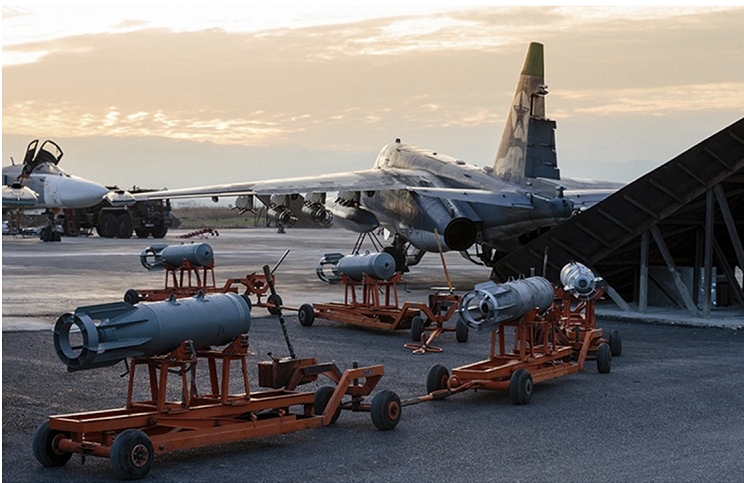 “Over the past four days the planes of Russia’s air group in the Syrian Arab Republic made 157 sorties against 579 facilities of the terrorist infrastructure in the provinces of Aleppo, Deir ez-Zor, Homs, Hama, Raqqah and Latakia,” he said. The Su-34 bomber delivered air strikes on the strongholds of the Islamic State (IS) group’s gunmen at the high points near Kabakli in the Latakia province, Konashenkov said. The strikes destroyed four SUV with installed large-caliber machine guns and around 20 gunmen.

Konashenkov elaborated that more than 60 Islamic State militants were killed in Russian air strikes in the Syrian province of Dei ez-Zor, where Islamic State massacred about 300 civilians.

“Russian Su-34 bombers delivered air strikes at terrorists’ strongholds in the vicinity of the settlement of Bgelia in the Dei ez-Zor province, where Islamic State militants massacred about 300 civilians to intimidate the local population,” he said.

He said more than 60 terrorists had been killed in the air strike. Apart from that, three trucks with munitions and two Jeeps with ZU-23 artillery systems had been destroyed, he added.

Last weekend, France Presse reported mass killings of civilians by Islamic State gunmen in the city of Deir ez-Zor. Apart from that, terrorists reportedly took hostage more than 400 people, including women and children.

According to the spokesman, Russia’s warplanes have destroyed a weapons warehouse and terrorists’ convoys in Syria’s Aleppo and Hama provinces.

“A Sukhoi-25 fighter-bomber has wiped out terrorists’ weapons and ammunition depot near Tell Rifaat, Aleppo province. Objective monitoring means registered the detonation of explosives stored in the building and the full destruction of the facility and the items in store,” he said.

In the area of Ahras, in the same province, Sukhoi-34 bombers destroyed 20 off-road vehicles carrying weapons and militants from the Turkish border to Aleppo, Konashenkov said.

Konashenkov also said Russia’s combat aircraft have destroyed an oil pumping station in the Syrian province of Raqqa and a convoy of fuel tanker trucks in the province of Aleppo.

“During the operation to undermine the sources of terrorists’ criminal incomes, Russian warplanes have destroyed a large depot of fuel and lubricants and an oil pumping station in the province of Raqqa over the past four days,” the spokesman said.

Also, Russia’s air reconnaissance detected a convoy of fuel tanker trucks near the settlement of Herbol in the province of Aleppo carrying smuggled oil towards the border with Turkey. During its air raid, the Russian bomber Su-24 destroyed 23 fuel tanker trucks, the spokesman said. According to the official, the gang of warlord Abu Khaldun numbering about 30 people has deserted after the Syrian government troops liberated the Salma locality in the Latakia province.

“The facts of militants’ mass desertion and evasion of whole their units from further participation in hostilities have been observed. Thus, a gang of warlord Abu Khaldun comprising about 30 people deserted their positions en masse on Sunday,” Konashenkov said.

According to the official, after the liberation of Salma the activity of militants in the area of the Jabal al-Akrad mountain group significantly decreased.

According to media reports, the Syrian government forces entered Salma on January 12. According to the head of the Main Operations Directorate of the Russian army’s General Staff, Sergei Rudskoi, the opposition detachment “Desert Falcons” actively helped to liberate one of the “main strongholds” of the Islamic State militants and the capital of mountainous Latakia.

“In the north of the province of Latakia, three settlements were liberated with the active participation of the Desert Falcons opposition group, including the town of Salma that is the main stronghold of militants and capital of mountainous Latakia,” Rudskoi said on Friday (Jan 15). According to him, Syrian government forces also seized 10 settlements in the province of Hama. “Twenty-four armed militants have voluntarily surrendered to government forces in combat near the town of Jarjis,” Rudskoi said. “Government forces and militias took seven settlements near the Kweires airfield.” Russian General Staff: Syrian opposition actively helped in freeing one of IS strongholds

The Syrian democratic opposition forces operating in conjunction with the governmental troops have been playing an ever more important part in the fight against the terrorists in Syria. “At present, the personnel strength of such opposition forces exceeds 10,500 men,” Rudskoi said. According to him, the opposition forces led by Aiman flyat al-Ghanim have advanced by 8 km toward al-Raqqa considered the ‘capital city’ of the Islamic State and liberated for towns. “The Soureim and Chelobiya detachments have driven the IS militants from an area totaling 60 square km on the eastern and western side of the dyke on the Euphrates River near al-Ahmar,” Rudskoi added.

More than 200 settlements have been liberated from Islamic State terrorists since the beginning of the Russian operation in Syria. “In all, 217 settlements have been retaken and an area of more than 1,000 square km has been liberated from the Islamic State terrorists over the 100 days of the operation being carried out by the Russian Aerospace Force’s task group in Syria,” General Rudskoi said. “People are returning to Syrian towns, and peaceful life is being restored,” he added.

Russia’s Aerospace Forces launched a military operation in Syria on September 30 after the Federation Council unanimously approved President Vladimir Putin’s request for the use of the armed forces against terrorists outside the territory of Russia. On the same day, Russia’s aviation group started to deliver the first pinpointed airstrikes against the militants’ positions. The Russian aviation grouping comprises more than 50 aircraft and helicopters, including the Sukhoi Su-34 and Su-24M bombers, Su-25 attack aircraft, Su-30SM fighters and Mil Mi-8 and Mi-24 helicopters. Also, overnight to October 7, the Caspian Flotilla ships delivered a massive strike on the IS objectives in Syria, using Kalibr NK shipborne cruise missiles.

From November 17, the Russian aviation group in Syria switched to delivering massive strikes against militants, including with the involvement of strategic bombers. As the Russian Defence Ministry reported, Russia’s air grouping has focused on destroying terrorist-controlled oil extraction, storage, transportation and refining facilities.

The airstrikes are conducted at the request of Syrian President Bashar Assad. The Russian authorities have said on many occasions that Russia’s armed forces would not take part in any ground operation in Syria. The time limit of the operation will depend on the results of the fight against the Islamic State group.