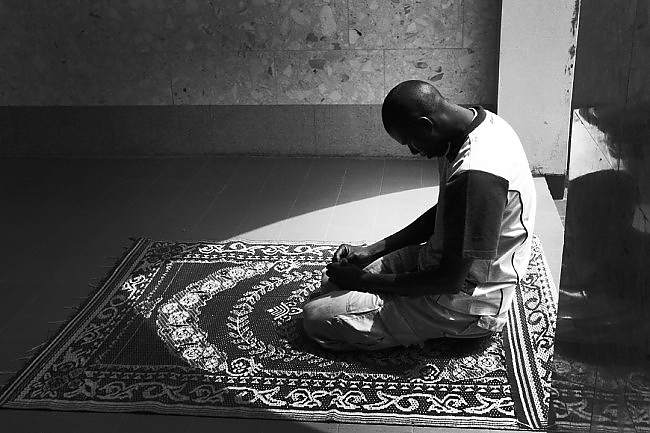 A new study by the Journal of Military Medicine has shown that meditation can ease the symptoms of Post-Traumatic Stress Disorder (PTSD).  Though the study used Transcendental Meditation (TM), it stand to reason that Islamic Meditation (IM)—which includes asking God for forgiveness for ones morally wrong actions—could be even more effective.

According to “killology” research by Col. Dave Grossman and colleagues, the leading factor in veterans’ PTSD is deep-seated guilt, whether conscious or unconscious, stemming from participation in the killing of one’s fellow human beings—an act which does violence not only to the victim, but to the psyche of the perpetrator as well. TM and other “secular” meditation techniques, which lack a moral/ethical dimension, cannot address such issues.

There are basically three forms of Islamic meditation:

So when we practice dhikr, we are remembering “God, who is our home.” In Islam there is no original sin; a perfect God can only create a perfect creation, so all we need to do is REMEMBER the perfection from which we came and to which we return. Dhikr consists of repetitions of special sounds and phrases, combined with breathing techniques, enabling us to actually “remember” our Divine source — not in the sense of intellectually remembering information, but in the experiential sense of re-experiencing, like Proust re-experiencing the taste of his famous childhood madeleine. The Qur’an tells us to practice dhikr while standing, sitting, laying down on our sides…and Sufis, who have developed dhikr into a science of meditation, do all of the above.

One of the most commonly practiced dhikr formulas is “astaghfirullah” meaning “I ask God for forgiveness.” This would seem to have special efficacy for treating PTSD, which, as mentioned, is partly caused by deep feelings of guilt due to participation in unjust wars and killing.

According to Islam, God’s first two tangible characteristics are mercy and compassion, to which we appeal when performing istighfar.

Many American veterans of the 9/11 wars have converted to Islam and practiced various forms of Islamic meditation—giving them not only hope of divine forgiveness, but also forgiveness from the world’s 1.8 billion Muslims, who have been targeted by these criminal wars launched on satanic Big Lies. Muslims—meaning real Muslims, not takfiri lunatics—are famously quick to forgive those who sincerely repent, and are the most generous and loving people in the world in welcoming brothers and sisters from all races and cultures into their faith.

The practitioners of TM, Zen, Tibetan Buddhism, yoga and other traditions that use meditation have thus far been more effective than Muslims in educating Westerners about the benefits of these practices. I hope that more Muslims will join the worldwide awakening to the benefits of meditation, and work harder at explaining the beauty and efficacy of their own traditions to the world.