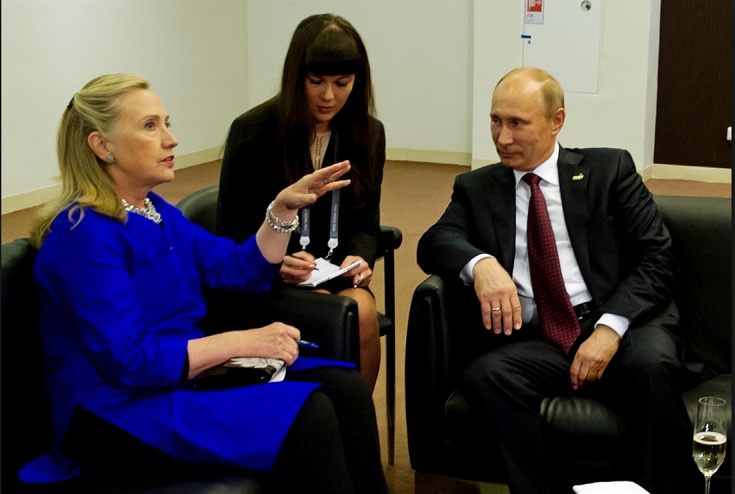 Sputnik – With Russian media buzzing over presidential candidate Hillary Clinton’s talk of a new ‘reset’ vis-à-vis Moscow, Russian experts are more grounded in their approach, taking the former secretary of state’s proposition with a grain of salt (or a barrel full).

During Sunday’s Democratic debate, Clinton suggested that a new ‘reset’ in relations with Russia might be possible, “depending on what the US will get for it.” Furthermore, answering a question about her relationship with Russian President Vladimir Putin, Clinton described it as “interesting” and “respectful,” quickly adding that she and the president had had some “very tough dealings with each other.”

The new tone is a marked change to Clinton’s position toward Russia in recent years. During her tenure as secretary of state, Clinton accused Moscow of attempting to ‘rebuild the Soviet Union’. After the Ukraine crisis hit, Clinton sharpened her rhetoric, comparing Putin to Hitler, saying that his actions reminded her of “what Hitler did back in the ’30s.”

Moreover, in the run up to the 2016 presidential campaign, Clinton repeatedly categorized Russia’s policies as a “threat to American interests,” hurled more insults against the Russian leader, and suggested that ultimately, the US must “stand up to, encircle and…try to choke off [Putin’s] ability to be so aggressive.”

So why the sudden change of heart? According to Svobodnaya Pressa columnist Svetlana Gomsikova, the answer is simple: “pragmatism.”

Clinton’s answer at the debate (i.e. that everything will depend on ‘what the US gets in return’), is “purely pragmatic,” the journalist argues.

“For example, Clinton recalled that seven years ago, the US received permission for the transit of NATO military cargo to Afghanistan via Russia, reached an agreement with Moscow on the limitation of nuclear weapons, and another one on sanctions against Iran.”

“What she did not mention,” Gomsikova adds, “is that the symbolic red button which she presented to Russian Foreign Minister Sergei Lavrov in Geneva in 2009 as a symbol of the reset of relations between Washington and Moscow was slightly defective.”

The famous red button on a yellow and black base featured a minor translation error. Instead of reading ‘perezagruzka’ (reset), the button actually read ‘peregruzka’ (overload). Written off as a minor flub at the time, Gomsikova recalls that in fact, the error “eventually proved to be prophetic. Clinton had promised Lavrov, who called her attention to the mistranslation, that Washington would not allow for an ‘overload’ of US-Russian relations. Then there was Libya, Syria, and Ukraine…”

Commenting on Clinton’s change of tune, and the prospects for a real ‘reset’ in relations between Moscow and Washington, Sergei Samuylov, the head of the Center for Research of US Foreign Policy Mechanisms at the Moscow-based Institute for US and Canadian Studies, told Svobodnaya Pressa that “for openers, Hillary Clinton is a leader of the Democratic Party. And the Democrats recognized even ahead of the 2008 election that America is not omnipotent, and cannot lead the world on its own.”

“Therefore,” according to the Democrats’ worldview, “solving global and regional problems requires cooperation with other countries, or as they put it, ‘the establishment of partnerships’. It’s worth recalling that shortly into her tenure as secretary of state, in 2009, Clinton said that the US would have to move ‘away from a multi-polar world and toward a multi-partner world.’

During his first term as president, Obama more or less moved in this direction. And then came the Ukrainian crisis, and the ‘reset’ with Russia was buried.””By the way,” Samuylov notes, “the incident with the button indicates the very low level of US diplomacy. They were unable to accurately translate one Russian word.”

As for the preconditions Clinton has placed on the ‘Reset 2′, the analyst suggested that “it’s difficult to say exactly what she might demand as payment. In recent years, the US establishment has seen very serious debates about the increasing geopolitical role in the world of Russia and China. Therefore, it cannot be ruled out that the US strategy in this polycentric world will be to try and slow the growth of the two countries’ global influence.”

In any case, Samuylov argues, in Washington’s view, a Western-dominated “world order which discriminates against non-Western countries is simply the natural order of things. And when we, or the Chinese, show resentment, or try to create some alternative (such as the new Asian Infrastructure Investment Bank), the US naturally sees it as an encroachment, and presents it as aggression, or a manifestation of imperial ambitions.”

Subsequently, when asked whether Russia even needs such a ‘reset’ with Clinton, should she become president, the analyst noted that really, “the ‘reset’ is just a pretty slogan. I would say that we need to act pragmatically – to cooperate where our interests coincide…As for those areas where we are at odds, it’s necessary to try not to aggravate relations to the point of overwhelming the areas of cooperation. A reasonable balance is necessary.”

“Therefore, in principle, we do not need a ‘reset’, especially as some sort of handout from the United States. We just need pragmatism – to cooperate where our interests coincide, and to look for compromises in areas of disagreement.”

For his part, political analyst and journalist Leonid Krutakov agreed with his fellow expert, saying that sustained dialogue, and some hyped-up ‘reset’, is what’s needed. “I don’t know about this reset. Negotiations, of course are necessary. No dialogue means war. I don’t think that anyone is interested in a war, on our side or theirs. Therefore, it’s necessary to negotiate, especially considering that without Russia, which has a nuclear and military-technical potential comparable to the US, it is impossible to resolve many global issues.”

Ultimately, the journalist suggests, “today, security issues are of prime importance. Therefore, Clinton, as a politician a a candidate for president, cannot help but emphasize that she will try to find common ground with Russia. Otherwise, the world could quickly go to hell in a hand basket.”

Russia: What’s In It for Us? Clinton Signals New Russian-US Reset a Possibility

A possible new “reset” of relations between Moscow and Washington will depend on what the White House will get from it, according to former US Secretary of State and now presidential candidate Hillary Clinton.

Former US Secretary of State and now presidential candidate Hillary Clintonsaid that she does not rule out a new “reset” of Russian-US relations, which she said will hinge on what the White House will obtain from it, RIA Novosti reported.Her remarks came during the Democratic Party’s presidential debates on Monday.

When asked whether she is ready to again push a symbolic “reset” button concerning Russia-US ties, something that she did seven years before, Clinton said that “it depends on what I get from it.”

Clinton recalled that in 2009, Moscow and Washington signed an agreement on the regular transit of US military equipment and personnel to Afghanistan over Russian territory.

Also at the time, the two inked a deal to curtail the build-up of nuclear weapons and agreed on sanctions against Iran.

The Russian-US “reset” was an attempt by the Obama administration to improve bilateral relations in 2009.On March 6 of that year, Hillary Clinton and Russian Foreign Minister Sergey Lavrov pressed a red button emblazoned with a Russian word which Clinton thought meant “reset” in Russian. However, Lavrov explained to Clinton that the word on the button actually means “overcharge” rather than “reset”.

The 2009 reset finally came to a standstill in March 2014, when media outlets described the process as having “failed”, citing Crimea’s reunification with Russia, the armed conflict in Ukraine and the alleged lack of Russian cooperation with the United States on Syria.

Foreign policy was a hot topic during last night’s Democratic Presidential Debate. Former Secretary of State Hillary Clinton and Senator Bernie Sanders both discussed how to address the terror-ridden hot spot of Syria and how to deal with a more aggressive Russia.

Sanders made it clear during the debate that he disagreed with Hillary over what he called “the incredible quagmire of Syria.”

The senator called Syrian dictator Bashar al-Assad a “butcher,” but expressed he didn’t support arming a moderate rebel force in the country, which has sunk into a civil war that has claimed the lives of more than 250,000 people since 2011. The conflict also has opened the door for Islamist terror groups including ISIS to seek power and spread chaos.“It’s hard to know who’s fighting who and if you give arms to this guy, it may end up in ISIS’ hand the next day,” Sanders said. “We all know that.”

Hilary was a bit more cryptic about how the US should handle Syria. She was also careful not to undermine the Commander in Chief.

When asked whether she thought Obama’s failure to not respond with military force after it was revealed Assad had used chemical weapons on civilians, particularly his own people, Clinton shifted the conversation over to Iraq.

“If there is any blame to be spread around, it starts with the prime minister of Iraq, who sectarianized his military, setting Shia against Sunni,” Hilary said. “It is amplified by Assad …”

US Should Unite Anti-Daesh States, Including Russia, Iran – Sen. Sanders

She also called the president’s alternative of trying to remove chemical weapons from Syria with help from Russia a “positive outcome.”Nonetheless, reports indicate terror groups in Syria may already have gotten their hands on chemical weapons.

Hilary pointed out she stood against Sanders’ proposal to involve the Iranian military in the fight against ISIS.

“… The immediate task is to bring all interests together who want to destroy ISIS, including Russia, including Iran, including our Muslim allies to make that the major priority,” Sanders said.

Russia was another focus.

Hilary was told she “famously handed Russia’s foreign minister a reset button in 2009. Since then, Russia has annexed Crimea, fomented a war in Ukraine, provided weapons that downed an airliner and launched operations, as we just did discuss, to support Assad in Syria.”

The former Secretary defended her actions by saying it led to a new START treaty between the US and Russia to shrink their nuclear arsenals. Hilary, however, did point to “fraudulent elections” bringing Putin back to power and said, “We have to figure out how to deal with him.”