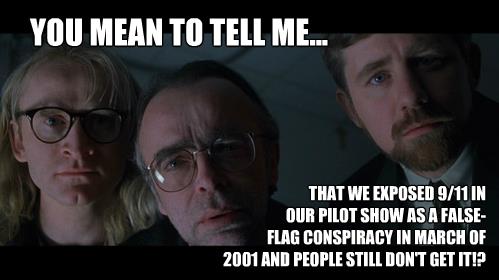 This week’s False Flag Weekly News (watch the above video—click here for the story links) asks:

Are we in the middle of a “False Flag Paradigm Shift“?  When X Files comes back for a special run based on a 9/11 truth “conspiracy theory,” and mega-bestselling author Dan Brown unveils false flags in his latest book, it does seem the mass mind is starting to shift.

This week we learned that the mosque attended by the two San Bernardino patsies has officially stated on its FaceBook page that the attacks were a false flag. And America’s most influential African-American leader (with vastly more street cred than the President) Minister Louis Farrakhan just made the same point in a mainstream radio interview.

Meanwhile Israel is openly admitting its love for ISIS, while Rita Kaatz’s favorite supervillain cartoon character, Jihadi John, has been “written out of the script.”

It’s a false flag world out there, folks! And the best way to keep up with it is by watching False Flag Weekly News. You can catch us live every Friday, 11 to noon Eastern (8 to 9 a.m. Pacific) at NoLiesRadio.org.