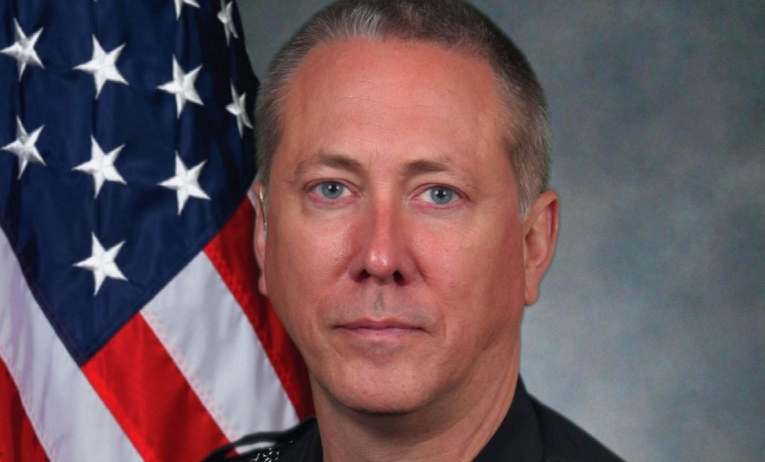 The grand jury deliberated from 9:00am into early evening on Thursday, before indicting Olsen on two felony murder counts, one aggravated assault count, one making a false statement count, and two violation of oath by a public officer counts.

Hill, who was 27 at the time of his death on March 9 last year, was shot twice in the chest by Olsen. The events of that day began with neighbors calling police about a naked man’s outlandish behavior. Witnesses said Hill jumped from his second floor apartment balcony twice, climbed the side the building, and ran and crawled around the premises, all while naked and speaking incomprehensibly.

Hill, an Air Force veteran, was mentally ill, and according to his family’s attorney was medically discharged after being diagnosed with bipolar disorder in 2013.

Olsen, who had previously undergone training on dealing with mentally ill people, gave repeated commands to Hill to stop where he was, but when Hill continued toward Olsen, the officer pulled his service weapon and fired twice. Hill was carrying nothing, and Olsen did not use the Taser or pepper spray he was carrying at the time.

Afterward, Olsen said he feared for his life, and that Hill was likely on PCP or a similar drug. Different witnesses at the time said Olsen approached either normally or menacingly.

The fatal shooting occurred seven months after Ferguson Police Officer Darren Wilson shot teenager Michael Brown dead, spurring riots and protests. In that case and this one, the police officer was white and the victim was black and unarmed.

At the courthouse, some activists had been protesting for days. Upon its doors opening Thursday, groups Rise Up Georgia, Southern Christian Leadership Conference, and Black Lives Matter greeted people with chants and signs, stressing the importance of the facts that Hill was wearing no clothes and was unarmed.

Earlier in the day, Hill supporters danced and sang lyrics dedicated to bringing justice for Hill. In one video posted to Twitter, they chanted, “We comin’, we ready, shut down Babylon, Ant Hill was the bomb.”

Hill, just three days before his death, tweeted, “The black community needs to work harder to make sure WE know that #blacklivesmatter. Our actions will either support or diminish our words.”
When the news of the indictment broke, Hill’s girlfriend Bridget Anderson tweeted, “Our prayers were answered. I’m on top of the world. We got justice for you, baby boy! Forever I love #Antlanta!”
In Georgia, law enforcement officers under grand jury investigation are allowed to attend the jurors’ meeting as well as speak to an expert panel without fear of cross-examination or rebuttal. That is partially why the resulting indictments were such a relief to activists weary of the judicial system in a county where blacks make up about 55 percent of the population.

The Atlanta Journal-Constitution reported in October that Georgia had documented over 170 deadly police shootings since 2010, with just one incident ending in an officer being charged. That charge was eventually thrown out.

“I’m just glad that the jury saw what we already saw: the evidence, the truth,” Carolyn Giummo, mother of Anthony Hill told reporters outside the courtroom. “I’m speechless.”

The Hill family statement was partially caught and shared on Twitter:

Outside the courthouse, supporters of the indictment celebrated, cheering, “All six counts!”
In an email to The New York Times, Olsen’s attorney, Don Samuel, wrote, “The defense, of course, was not permitted to present any of the witnesses who were present at the scene, or any expert witnesses who would testify that Officer Olsen’s reaction to the threat of violent injury was reasonable.”

“When this case is presented in a fair manner to a jury in an open courtroom, Officer Olsen will be fully exonerated.”