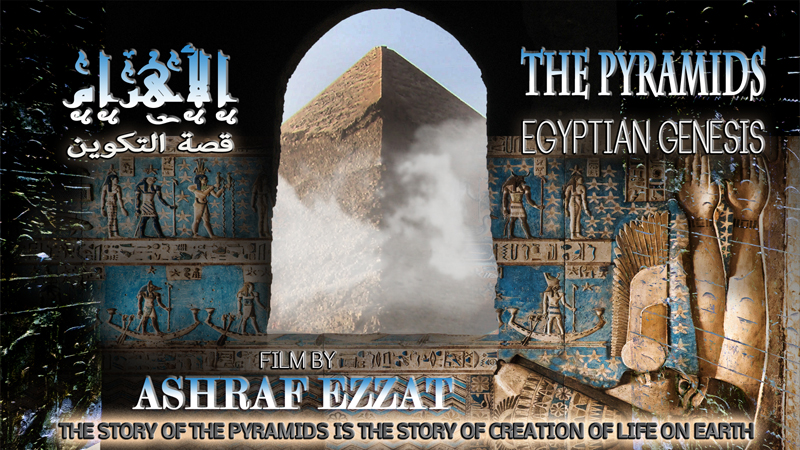 ‘The pyramids: Egyptian Genesis’ is my first video art film (its debut was in 2014)

I had in this short film the opportunity to capture glimpses, albeit experimental, of two of my most obsessive passions, cinema and ancient Egypt. The film has been screened in a couple of international film festivals in Europe and Egypt.

Through the film technique, I try to tell the story/myth in the film without distracting the viewer’s eyes/ears with unnecessary effects and narration.  Of course the film has all the shortcomings/limitations of a first project, still I believe it has some good sequences, and I especially think we did a fairly good job when it comes to the sound track.

Every time I’m tackling the remote history of ancient Egypt in my films and even in my books, I find myself confronted with the challenge of how to shift my time-machine’s gear and travel (with the viewers) thousands of years back in time.  That’s why the rather slow pace of my camera is both deliberate and of major significance to me. The aim obviously is to put the viewer in a contemplative mood, which could help her/him view Egypt anew (untainted by the long legacy of Hollywood’s fake stories of walking mummies, ruthless pharaohs and the notorious story of the Israelite Exodus that never took place in Egypt)

The Pyramids starts with picturesque images, from the (recently renovated) relief carving on the ceiling of Dendera temple, illustrating the myth of the perpetual rebirth of the sun in the morning out of the womb of Nut, the sky lady/Goddess, who devours the sun disk every day at sunset.

The film ends with the sunset, the time for Ra (the one and supreme creator God) to embark (riding his barque) on his perilous night journey, through the many dungeons and gates of which he triumphs over the power of darkness. At the next dawn, Ra emerges once again in his glorious and eternal rise of the sun.

The theme of the pyramids is preceded by excerpts from the Egyptian myth of creation, according to which the filmmaker builds his visual thesis and answer to the long standing and enigmatic question of why those colossal stone constructions, known as the Pyramids, were built.

The title of the film suggests that the filmmaker envisions the colossal pyramidal masonry as physical embodiment of the Benben/Pyramidion, the primordial mound which was the first sign of land/life that had appeared after the receding of the primordial chaotic waters known as Nun according to the ancient Egyptian myth of creation.

Watch a synopsis of the Egyptian creation myth

As we mentioned earlier, the Pyramids film uses no narration and relies solely on the language of image and music to communicate visually and emotionally and somewhat intellectually with the viewers. The slow pace of the camera is subtly employed in sync with the music to capture those remote–in-time moments of mythology and mysticism in ancient Egypt.

I have chosen an ancient era of antiquity for my film, where people spoke differently, ate and drank differently, fought war and made money and even made love differently. They also believed in different creation stories/myths and worshiped different deities. They perceived the world differently and may be more profoundly than we, modern people, do. And speaking of perception, it is worth mentioning here that the actual story of ancient Egypt is completely different from the Biblical one that we (generation after generation) have been spoon fed for more than two thousand years.

The cinema that tries to retell humanity’s ancient stories is bound to not only be different, but to also respect the time and cultural gap that were we not conscious of its depth, boundaries and maybe ambiguity; we would be bound to commit the double sin of misinterpreting the historical story and eventually alienating/misinforming the viewers.

In my film, it is true that I’m celebrating the beauty and uniqueness of ancient Egyptian art, colossal monuments and mythology, but I’m also trying to reestablish the lost link between modern day Egyptians and their remote ancestral culture. I’m persistently pursuing that goal, in both my films and books, because I think the crisis of modern day Egyptian cinema, as well as Egyptian culture and geo-politics, is of lost identity. The same predicament applies to westerners as they try to bridge the (unbridgeable) gulf between the true history of ancient Egypt and the (tampered with) Biblical stories about the land of the Pyramids. Or what the Biblical stories had deceptively designated as the land of the ‘Pharaohs’.

To help you discover the truth about ancient Egypt, read my book (Egypt knew no Pharaohs nor Israelites) available now on Amazon.