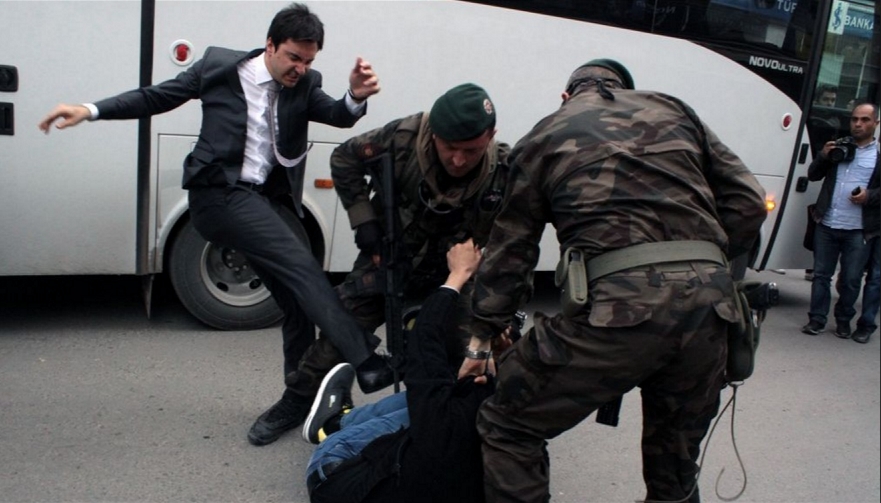 By Dr. Can Erimtan for New Eastern Outlook, Moscow

Last year, Recep Tayyip Erdoğan’s Justice and Development Party (or AKP) took steps towards converting the Republic of Turkey into a just another typical Middle-Eastern “Mukhabarat state,” a state where official intelligence services are busy keeping taps on the people while developing all kinds of nefarious cross-border activities embroiling the country in all kinds of dodgy affairs and/or relations.

Some time ago, at the very end of the previous calendar year to be precise (31 December 2015), Turkey’s Constitutional Court (or AYM) issued a review of a controversial law that had been in power since 26 April 2014. The law in question, Law Nr 6532 containing 15 individual articles, deals with the National Intelligence Organization (MİT) and has granted sweeping powers to the agency, effectively turning the organization into “Tayyip’s Praetorian Guard”, as I somewhat flippantly wrote at the time. Originally founded in 1965 by means of the promulgation of Law nr. 644 to “collect intelligence to do with threats to the country and the nation’s integrity and security” and accountable only to the figure of the prime minister (Law nr. 2937, Article 7, 1 Nov 1983), the National Intelligence Organization has really been able to act with impunity since the adoption of Law Nr 6532, with arbitrary phone tapping constituting but tip of the iceberg of its activities. As a result, it was but natural that the opposition Republican People’s Party (or CHP) would lodge a complaint, which was filed by the MP Ahmet Toptaş. And after a near-two-year period the AYM finally issued its verdict, leaving the new law virtually untouched sufficing with the annulment of but two articles (Articles 6 and 9), dealing with the extradition of non-Turkish suspects and with the ability of former and current members of MİT to act as witnesses in court cases concerning the actions and competency of the National Intelligence Organization. Moreover, these annulments will only become binding in six months’ time. And hence, Turkey’s Constitutional Court all but upheld the organization’s status as a Praetorian Guard, acting on behalf of the nation’s Prime Minister.

Following the court’s pronouncement the CHP member Toptaş was only able to say that “[o]ur real worry was that Turkey would be turned into an intelligence state” . . . or a police state, if you will. MİT’s mission and the actual scope of its activities are quite diverse, as seems amply illustrated in the case of the editor-in-chief of the opposition daily Cumhuriyet, Can Dündar. Together with the paper’s Ankara bureau chief Erdem Gul, the journalist was arrested on 26 November 2015 and charged with “treason” and “espionage.” These arrests were made because the daily Cumhuriyet had posted a video online, a video showing the contents of a Turkish truck heading for Syria stopped by the Turkish security forces (Gendarmerie). As I wrote at the time, initially it was claimed that the vehicle and its contents belonged to the Humanitarian Aid Foundation, or İHH, but subsequently “it was revealed that the truck in question actually belonged to Turkish National Intelligence Organization.” The three individuals aboard the truck even turned out to be MİT officials (2 Turkish and one Syrian citizen).

In a piece published in the Guardian, Dündar himself explained that “[e]arly in 2014, a truck understood to belong to the Turkish intelligence service (MİT) was stopped near the Syrian border. The gendarmerie and the intelligence officials in control of the convoy pulled guns on each other . . . The truck was searched. Beneath the camouflage composed of medicines boxes, weapons and ammunition were found. The truck was held for a while, but following the intervention of government officials a safe passage into Syria was granted.” When this truck affair was taking place, the office of the presidency was still held by Abdullah Gül, and he took the opportunity to issue a statement, saying that that “[certain] very extreme groupings have emerged in parts of Syria close to the Turkish border. There exists a Turkmen entity that is being crushed in the middle of these very hard conditions. It is [Turkey’s] duty to offer aid to Syria’s Turkmen [community]. They stated that this affair to do with this truck was [about] a vehicle delivering aid to the Turkmen [community] in Syria. I asked them about this truck [and] that is what I was told as well.”

Recently, the Turkish government used the same Turkmen argument in connection with the downed Russian jet, insinuating that Vladimir Putin had not joined the fight against the IS (or ISIS/ISIL) but was rather indiscriminately targeting armed groups and factions opposed to the Assad regime in Damascus. Now, Recep Tayyip Erdoğan occupies the post of President of Turkey, but at the time of the truck incident he was still PM and the National Intelligence Organization was accountable to him only. And, as a result, quite naturally he took the whole affair quite personally.

On 29 May 2015, the daily Cumhuriyet published video footage purporting to show the İHH or rather MİT truck carrying weapons and ammunition, bulletproof jackets and electronic devices, in addition to a number of survival goods. Dündar’s above-quoted piece states that “Erdoğan was in a fix. He couldn’t refute the story, so instead chose to censor the publication and threaten the journalist responsible, who was me. In a live broadcast on a state TV channel, he said: ‘The person who wrote this story will pay a heavy price for it; I won’t let him go unpunished’.” And in this way, a news story disclosing the direct complicity of the Turkish state in the arming and supplying of Syrian opposition groups fighting to overthrow Bashar al Assad became the tale of a vengeful politician bent on protecting his own and pursuing a personal vendetta against a journalist trying to do his job as best as he can. In an apparent effort to make the arrest appear less personal and directly related to the figure of Tayyip Erdoğan, Cumhuriyet‘s Ankara bureau chief Erdem Gul was also arrested.

Since then, many more allegations and many more accusations have been hurled at Turkey’s AKP-led government. Following the Turkish downing of a Russian jet, Vladimir Putin did not mince his words, saying that Russia has “recently received additional reports that confirm that oil from ISIL-controlled territories is delivered to the territory of Turkey on an industrial scale . . . We have all grounds to suspect that the decision to down our plane was motivated by the intention to secure these routes of delivering oil to ports where it is loaded on tankers.” And once more, the Turkish President took this as a personal attack, as an assault on his personal integrity and honour, even loudly saying that he would resign if Moscow can prove its claim: “As soon as such a claim is proved, the nobility of our nation requires (me) to do this” (30 November 2015). In fact, Tayyip Erdoğan persisted in turning the political personal or rather interpersonal, adding “I am asking Mr Putin – would you stay?”

In the same vein, when an opposition member appeared on the Russian international broadcaster RT repeating allegations he’d earlier made in Turkish parliament (on 14 December 2015), the President once again reacted in a manner reminiscent of an interpersonal brawl. In The CHP MP Eren Erdem related how in 2013 components for the production of sarin gas were delivered to Turkey and then taken across the border in Syria by a number of individuals: “[i]n connection with the shipment, the Adana public prosecutor Mehmet Arıkan, conducted an investigation and the people involved were detained. But as far as I understand he was not an influential person in [Turkey’s] bureaucracy. A[s a] week later, another public prosecutor was assigned, [who] took over the indictment and all the detainees were released. And they left Turkey crossing the Syrian border.”

The prosecutor Arıkan had prepared a 132-page indictment and six men were detained only to be freed later on — the Syrian-national Hytham Qassap and five Turkish nationals. These men were apparently linked to the al-Qaeda-linked Jabhat al-Nusra and the Ahrar al-Sham, known for its ties toTurkey’s MİT. Following Erdem’s television appearance he was accused of treason, with Tayyip Erdoğan freely embellishing the story: “[t]hose accusing their own state of selling chemical weapons on a foreign state’s [television] channel, they are becoming party to a ring of treason . . .What kind of treason is this? How can you accuse [us] of delivering sarin gas to a terror state like Syria?” (17 December 2015). The following day, Erdem fired back, keeping the political personal, saying that he expects “an apology from Erdoğan on account of his statement.”

In the end, one can only say that Recep Tayyip Erdoğan and his henchmen have successfully turned Turkey’s political discourse into a parlour game of interpersonal exchanges, while on the public scene he and his party apparatus appear to have transformed the country’s National Intelligence Organization (MİT) into a personal Praetorian Guard to be used (or abused) in the pursuit of various arguably unsavoury policy aims and “state secrets.”

Dr. Can Erimtan is an independent scholar residing in İstanbul, with a wide interest in the politics, history and culture of the Balkans and the Greater Middle East, , especially for the online magazine “New Eastern Outlook”
First appeared:http://journal-neo.org/2016/01/21/turkeys-praetorian-guard-and-its-mission/