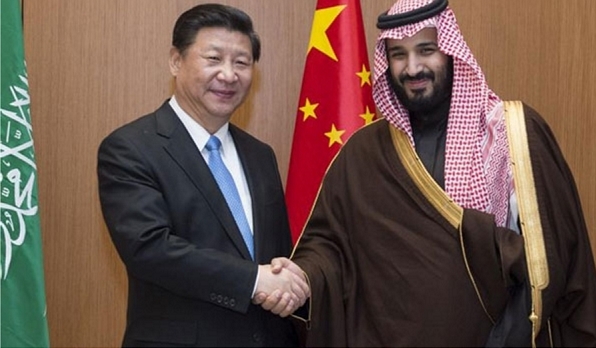 TEHRAN (FNA)- Sources revealed on Saturday that the Chinese delegation is unhappy with the recent visit to Riyadh after arrangements for a meeting between Saudi Crown Prince and Interior Minister Mohammed bin Nayef and President Xi Jinping failed.

Being concerned about operation of the terrorist groups in the region, the Chinese president was interested in holding a meeting with the Saudi crown prince – who is also in charge of the country’s domestic security as interior minister –  but arrangements for the meeting failed, a source said today.

During the first day of his visit to Riyadh on January 19, President Xi met with Deputy Crown Prince Mohammad bin Salman who is also Saudi Arabia’s Defense Minister.

President Xi Jinping also met Saudi King Salman in Riyadh and then inaugurated a joint-venture refinery in Yanbu Industrial City on the Red Sea on Wednesday.

The source said arrangements for the meeting with the crown prince failed due to internal differences and rivalries between Mohammed bin Nayef and his deputy Mohammad bin Salman who is the King’s son and has high aspirations to topple the Crown prince to replace him.

Tough rivalries in the Royal family have always been underway in Riyadh in the last few years, but princes are now showing teeth to each other as the health conditions of the ailing King is reportedly deteriorating.

Sources in Riyadh revealed last year that a large number of princes were readying a coup to topple the king and his son – the deputy crown prince – in protest at the Saudi foreign policy that is pushing the country into bankruptcy.

Yet, the worst type of rivalries are seen between the crown prince and his deputy.

A prominent Saudi media activist revealed on Tuesday that the crown prince has held secret talks with the country’s tribal leaders to heighten internal conflicts and prevent empowerment of Mohammed bin Salman.

“After news reports said that the Saudi king has decided to leave the power to his son, the Saudi crown prince has held some meetings with the tribal leaders to destabilize domestic conditions in Saudi Arabia,” the activist who called for anonymity for security reasons told FNA.

Noting that the details of these meetings are not known, he said it seems that Mohammed bin Nayef sees himself entitled to the throne, and he, thus, seeks to spark internal problems and insecurity with the help of certain tribes to stir crisis and prevent the deputy crown prince, Mohammed bin Salman from ascending to the throne.

Reports in August had informed that the Saudi crown prince had enhanced security arrangements for fear of assassination plots of rival princes in the royal family.

“Mohammed bin Nayef has changed the venues of his daily tasks, procedures and itinerary of his visits and appointments, his team of bodyguards and their methods to decrease the danger to minimum levels,” Mujtahid, a well-known source in the royal family, wrote in his tweets.

Mujtahid is a Saudi political activist who is believed to be a member of or have a well-connected source in the royal family.

Noting that the Saudi crown prince uses helicopter flights for most of his visits to different places, he said, “Tens of armed vehicles and over 80 security forces always accompany him during his visits.”

Mujtahid said that Mohamed bin Nayef rarely stays in his palaces and uses his father’s palace on an island in the Red Sea behind fortified security measures and large numbers of security forces there.

He also spends a lot of time to eavesdrop the phone calls of the ruling family members, the Saudi activist revealed.

The changes signaled a major shift at the top of the ruling Al Saud family away from princes chosen by the late King Abdullah, who died in January 2015, and towards those close to the new monarch.