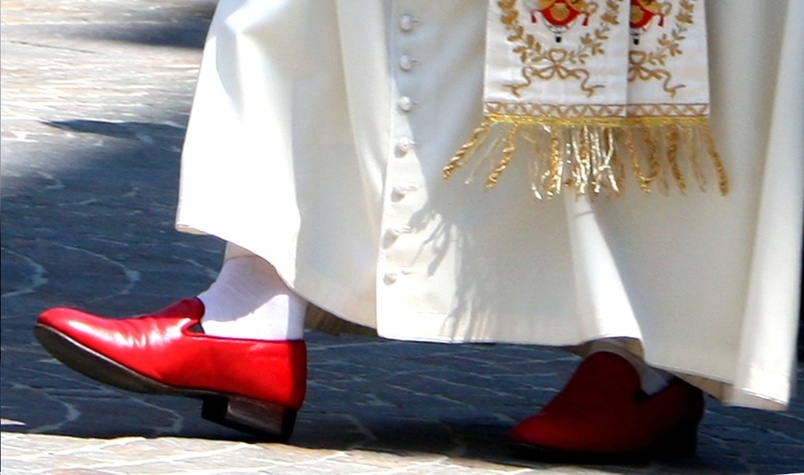 The Vatican is the prototype of a Corporate Fascist entity. It answers to nobody. It pays taxes to nobody. Its Bishops and priests have diplomatic immunity all over the world. It even has its own embassies. It owns more real estate than any other entity on the planet.

It was never about God, Jesus or Christianity, it is about power and control and “fashion statements. “

The Vatican has major shareholding in all the top corporations. Lockheed Martin and Bank of America being two examples.

But who and what is the Vatican really, behind their elected men dressed up in red Prada shoes ( The Devil wears Prada) , one of the biggest pedophile rings on the planet, money laundering, drug running entities and illegal arms trade industries in the world?

The Vatican is a front for the Black nobility of Europe, Zionist Bankers and the Wahhabi sect under the control of the Saudi Royal family.

It does not believe in Democracy and certainly not the framework of a Republic. It advocates monopolist, political tyranny, hegemony and a hierarchical framework where in their own courts they have trial by ordeal, not a free and fair trail with witnesses to speak on their behalf.

For the last 1,000 years, their goal has been to take over Russia, which has determinedly remained Orthodox Christian in spite of a communist invasion funded by Wall Street Bankers, and not succumbed to the dictatorship of the pope nor in their advocacy that the pope owns the planet, all bodies on the planet and all souls. An Apostolic Church based on all twelve disciples, as opposed to Peter, who is the only person referred to in the Bible as Satan, is more in alignment with a Federation of States, a Republic and Democracy.

The Spanish, during the heady times of the Inquisition and the rise of the Jesuits, explored and colonized the New World, most notably South America. In the 20th century, we saw repeated violent Fascist Dictatorships across that continent suppressing the will of the people, and where the hidden hand of the CIA, which is duty bound to the Vatican, has played a major role.

There are still those in this contingent that are attempting to take over Russia as they have been trying to do for 1,000 years, however there are others who have moved on. They have by slow degrees moved to South American countries and taken their wealth with them.

They have also spawned from the motherload of the Vatican which is the prototype of Corporate Fascism, a New World Order under the auspices of the TPP and the TTIP agreements.

The Vatican that was once their bread and butter has now expanded into what is also known as the Vampire Squid. An Octopus of Corporations that now span the world. Under the TPP and the TTIP agreements, corporations will become satellite states much as the Vatican has been, with their own closed secret law courts, their own diplomatic immunity and their tax-free status. They will now have the same rights and powers as governments. They will be able to sue governments for loss of income due to wage labour laws, health laws, environmental laws in fact any government regulation that they see as a hindrance to their profitability.

The Black Nobility, the Jesuits, the Illuminati and the Zionist Bankers will change like chameleons, in fact already have. They are now the CEOs of these corporations and have successfully removed themselves from nation-state status and the thrones which they once sat on, all altars at which they once served as priests and central banks which they once controlled. Sorry guys, the horse has already bolted from the stable.

They have stolen as much gold as they could in the last 500 years and have it in private storage facilities that you know nothing about. Leaving countries around the world with now defunct central banking systems that are bankrupt.

The Vatican will become a “poor church,” because quite simply all its wealth has long since left Italy, along with all the gold in their catacombs, art works and the library. Anything you see in the Vatican today is a replica.

The real power in the Vatican has long since vacated the building. They sit in boardrooms now, plotting and planning the full implementation of the TPP and the TTIP agreements and when they do not get their way, they set loose colour revolutions, tsunamis, earthquakes and droughts in order to convince other nations to fall into line. Which by the way, is a crime against humanity and needs to be addressed in an international court of law where the perpetrators are arrested, charged and brought to book.

Having failed no less than three times to take over Russia, (Napoleon, WW1 and WW2 with a pathetic new attempt during the 1990s through economic warfare as well as the 2014 war in Ukraine), they have now decided to dump Europe altogether for better climes in the southern hemisphere. And as usual they will make it look like somebody else’s fault. That is their plan anyway.

Hence the funding by Soros of the refugees to Europe and the promises made to the Wahhabi that the failed invasion of the Ottoman Empire can now proceed. Muslims in time will be called invaders, colonizers and the main cause for the destruction of European society as we know it. The fall guys.

But things might turn out quite differently to what they expect.

For Europeans their best bet if they want to survive is to close all borders. Refuse to sign the TTIP agreements and then go east and join the AIIB and BRICS. If anything this is a gift horse, do not look it in the mouth.

Keep Monsanto out and deport all “refugees” most of whom are male and ISIS insurgent rapists, in fact send them back to Soros on a one way ticket! He is so rich he can feed, clothe and house them all. He funded them to go to Europe in the first place, so send them back to him.

After centuries of Vatican tyranny, Europeans are now free. Wave the Black Nobility, the Jesuits and the Zionist bankers goodbye as they board planes for South America. You are well shot of them. 1,000 years of burning people to death is overkill in anyone’s book. Francis is just basically closing shop and the Vatican is now an empty shell. He does not wear Prada and is doing a Uriah Heap impersonation in contrast to the Nazi Benedict who sat on a gold toilet seat. Its only smoke and mirrors babe!

Poland, Hungary, Austria, the Czech Republic and Slovakia have already woken up. They are moving east and dumping Brussels policies. They are tired of being used and abused in destructive wars across the continent where those who instigate them walk away rich while their populations are devastated. Hungary in their wisdom burnt Monsanto GM fields and eradicated it from their country. The rest of Europe will follow.

Eastern Ukraine will become an independent state. Poland and Hungary will reclaim what was originally their territory and the Zionist/Nazi/ISIS Kiev Junta will be isolated into a small state. Who needs these freaks? The whole world saw their barbaric rape, plunder and pillage in 2014 and nobody is particularly impressed. Germany will soon follow and go east as will France.

As for Spain, they are still tied by the umbilical cord to South America, the Black Nobility and what once was the Vatican which is now the Vampire Squid. Who knows how that will turn out?

Turkey is digging its own grave by threatening Russia in northern Syria. If they persist they will be broken up between the Armenians, the Kurds and the Orthodox Christians in the west. What will be left of Turkey will be a minor entity.

I also expect Constantinople and the Hagia Sophia to be returned to Greece where it belongs. And Revelation will be fulfilled.

That is the way I read it, rightly or wrongly. I am a woman. I reserve the right to change my mind at any point in time. It comes with the package and time will tell.