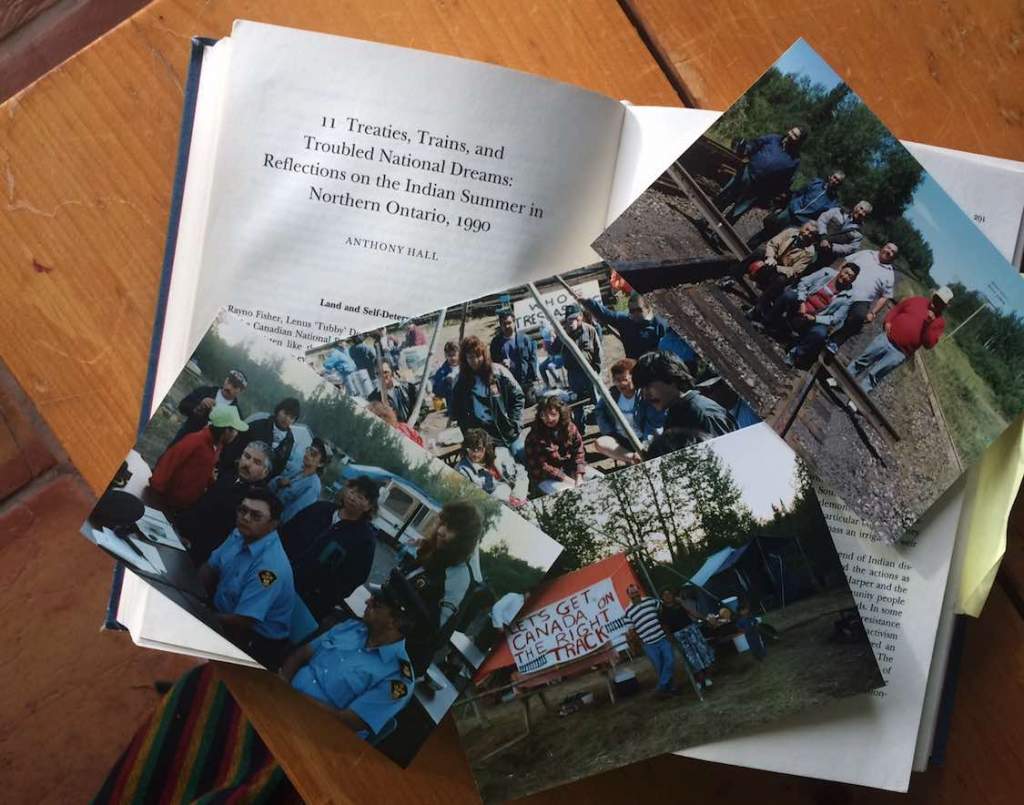 Fast-forward to the 31:00 mark to catch the discussion, then read the exchange between Steve Wolf and Tony Hall.

Thank you for your very informative response to our brief discussion of the Oregon land dispute. This dispute is obviously part of a larger popular movement of resistance to the plague of federal criminality on many fronts these days.

I would like to respond to you more fully in some sort of exchange that Kevin might publish in VT.

I was able to locate the Articles of Resolution from the Pacific Patriots Network. In my first run through, however, I couldn’t find the Redress of Grievance document. Could you please help me locate that. If you could please help me understand more deeply the politics of alliance and antagonism between the different patriot groups, factions, and leaders, I’d also appreciate that.

You obviously have considerable expertise on this important story, much more than me, I’m sure. An article by Paul Craig Roberts helped me see the importance of the Patriots’ stance. I did not take my criticism of it lightly.

The watchman video with the discussion of custodianship of the artifacts is very significant. Thank you for including that. Who, please, is Blaine Cooper and how is he situated in the mix?

Your reference to the Paiute as one among a list of “claimants” is problematic for me. From whom would the Paiute “claim” their land. It seems to me the federal government is one of the parties that have a claim against the Paiute. In Canada we have taken to referring to “First Nations,” which helps put things in perspective, historically, constitutionally and ethically.

The “Articles of Resolution” offer to the Paiute to take control of contested federal land in partnership with Harney County bears careful consideration. In theory the federal government should be a kind of protector for the Native Americans against the incursions of local settler governments, including those of the state of Oregon and Harney County. Obviously the federal government has strayed from that responsibility. But the constitutional principles, the theory if you like, cannot and should not be kicked aside without careful consideration.

To ask the Paiute simply to ignore the history of federal treaties with the First Nations and to become in an instant trusting partners with the lowest level of settler governments is rather unrealistic given the survivors’ history of direct experience with one of the most gruesome sagas of genocide ever. From the perspective of the First Nations, there is not a lot of reason to look well on invading cohorts of ranchers, miners, loggers, etc. That legacy has to be acknowledged first if it is to be in some way transcended.

Who would speak on behalf of the First Nations in this situation. The colonizing forces have organized it so that elected officials on federal reservations are essentially agents of the federal government living in communities often 90% dependent on federal transfer payments. Its not a pretty picture.

But that’s not the end of the story. There are First Nations people that have made stands against the federal authority, most famously in recent times at Wounded Knee in 1975. One of their martyrs, Leonard Peltier, remains incarcerated to this day in federal penitentiary. By far and away Peltier is USA’s most famous political prisoner. All Soviet school children were not too long ago taught his name. Will Obama grant Peltier some sort of pardon when he leaves office? Clinton didn’t. Certainly Bush didn’t. Might Obama? Maybe the Patriots could open up that issue to start the ball rolling on some sort of political accord with the First Nations.

Kevin Barrett and I have worked closely with Splitting The Sky who embodied the AIM heritage of anti-federalist, pro-internationalist First Nations politics. He was thrust into the spotlight after he was charged with killing a guard at Attica federal pen in 1971. You can easily research it all on google. More recently the late STS attempted a citizens’ arrest of George Bush in Calgary Alberta in 2009. STS spoke often to Patriot audiences like that of Jack Blood. While AIM continues it was pretty much undermined by the FBI’s COINTEL program and such.

I think that possibly we might be in a situation to help nudge along an alliance between the Patriots and at least some of the remaining freedom fighters among the First Nations’ survivors. Such an alliance if properly established on a shared platform of negotiated intent would indeed have huge international implications in a world where many millions if not billions feel colonized and repressed by the Anglo-American empire that in its more recent incarnation has become the Zio-American empire.

I learned a lot about First Nations relations to Canada’s federal colonizing society in 1990 when I was more or less front and center in a blockade of Canada’s two transcontinental railways starting with our actions in northern Ontario at Long Lake Reserve 58. I wrote about it in an academic article that was widely republished in the days before the ubiquitous Internet.

Essentially we cornered the federal government by doing our action on a train yard on a federal Indian reserve. In Canada rail transport is a federal jurisdiction. Moreover in those days the CNR Railway, running right through reserve 58, was a federal Crown Corporation. The CNR had not yet been sold to Warren Buffet’s Hathaway conglomerate. The legality of this transfer of Canadian federal property to a US-based private conglomerate could still be challenged.

We held our protest camp at Long Lake 58 for a week. Other First Nations groups followed our lead. For about 10 days we had held control of Canada’s rail transport system. That big deal at the time. The Canadian laws were subsequently changed to make our patriotic act subject to one or more of the unconstitutional, post 9/11 anti-terrorism acts.

None of us were charged back in the early 1990s. We were not criminalized because we were able to gain some traction in backing up our assertion that it was the federal government and its Canadian National Railway did not adhere to the laws of Canada. The law of “Aboriginal and treaty rights” had not been applied law since the initial laying of the steel ribbons across British North America. My experience in 1990, which culminated in my involvement at Oka Quebec as a negotiator between the federal Armed Forces and the Mohawk Warriors, is one of the highlights of my life so far. So too is my involvement in the case of Splitting The Sky versus George W. Bush, a legal proceeding in which Dr. Barrett, Cynthia McKinney, Ramsay Clark, Joshua Blakeney, Michel Chossudovsky and Michael Pengue were also deeply involved.

I think have a good sense of what “Gawker” is all about. I agree with your characterization of it as a trashy left liberal operation of controlled opposition. I paid considerable attention to a set of article on the Gawker site when I was working on my lengthy article on the US navy’s missile knockdown off Long Island of TWA 800 in July of 1996.

My article took the former of a film review of the documentary film of my friend, Kristina Borjesson. As I studied of the corruption of the federal aviation agencies it seemed to me more and more like a preparation of the ground for the great betrayal on 9/11.
http://www.veteranstoday.com/2013/07/27/twa-flight-800-and-911/

Your thoughtful letter, Steve, is the first serious commentary I have received on a particular news story since I got involved in a substantial way with “No Lies Radio.” As I see it this collaboration started with our “False Flag Islamophobia” event in Paris last December. Thanks so much Steve for taking the time to deepen the discussion on a very important topic.

I think our FFWN work-in-progress would be well served if we did significant follow up when we are honoured with an intervention as serious and substantial as yours. I propose we work together in a way that might affect how history unfolds. Ultimately I think that what it seems to me is the preeminent concern of the four of us now communicating in this way.

Beyond that I very much look forward to the possibility of picking your mind on Ottoman Empire history, a topic I have yet to address with the rigour it deserves given its importance in recent developments with what they describe in Iran as West Asia.