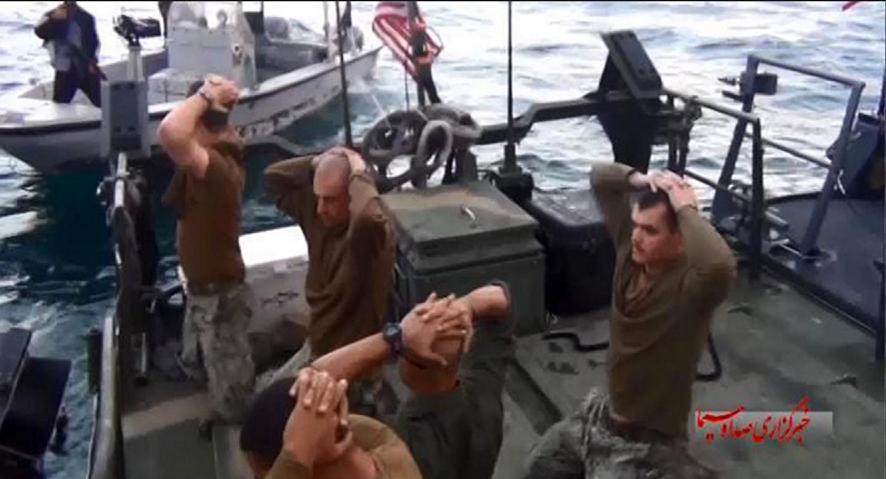 Was a secret deal cut between the government of Iran and American extremists in the Republican Party and Pentagon over the recent capture by “accident” of not one but three oddly lost American high technology patrol vessels sailing in the most critical regions of the Persian Gulf?

We’re going to look at this and see if a historical precedent can guide us toward understanding what really happened here and what we can expect in the near future.

A few days ago, the government of Iran released American sailors who had been detained when their patrol boats encroached on Iranian waters off a tiny atoll in the Persian Gulf. A photo of American, humiliated, on their knees, was flashed around the world.

This event was carefully timed to coincide with President Obama’s last State of the Union Address and was very embarrassing and damaging to the Obama presidency and the Democratic Party.

Pentagon watchers were very suspicious. The islands held by the Iranian Revolutionary Guard were seized from the UAE, the Tunbs and Abu Musa along with tiny specs like the one the American sailors “accidentally” trespassed upon.

However, a cursory examination of the boats used by the Americans reveal highly sophisticated navigation equipment that makes it virtually impossible for such a boat, much less three boats, guided by secure satellite, to go anywhere they aren’t supposed to. Simply put, navies navigate, it’s what they do, and the idea of the US Navy getting lost in the Persian Gulf “by accident” is insane.

If this was no accident, what was it and why did it happen when it did and who benefitted?

To understand better, we go back in time. The year is 1979, Jimmie Carter is the American president and Iran had seized 52 American hostages the year before and had negotiated with the US for their release. However, in October 1980, only a month before the presidential election, Vice Presidential candidate and former CIA Director, George H. W. Bush, flew to Paris and met with Iranian negotiators.

Iran was to get missiles, lots of weapons, all shipped through Israeli and Saudi arms dealers with huge profits lining the pockets of those around Bush. Eventually, 47 Reagan officials would face prison for this outrage, the secret deal with Iran, the rigged election and the years of arms and narcotics smuggling that were to follow.

For President Reagan, a few days after the election, he picked up a bullet, fired into him by the “lone gunman” son of a Bush family friend from the oil business.

Let’s take a look at one of the fallouts of Iran’s deal with Reagan, how Reagan and, in reality, George H.W. Bush, stabbed Iran in the back as payment for Iran’s aid in getting Reagan, or was it really Bush, into the White House. From Foreign Policy, August 2013:

“In contrast to today’s wrenching debate over whether the United States should intervene to stop alleged chemical weapons attacks by the Syrian government, the United States applied a cold calculus three decades ago to Hussein’s widespread use of chemical weapons against his enemies and his own people. The Reagan administration decided that it was better to let the attacks continue if they might turn the tide of the war. And even if they were discovered, the CIA wagered that international outrage and condemnation would be muted.

In the documents, the CIA said that Iran might not discover persuasive evidence of the weapons’ use — even though the agency possessed it.

It has been previously reported that the United States provided tactical intelligence to Iraq at the same time that officials suspected Hussein would use chemical weapons. But the CIA documents, which sat almost entirely unnoticed in a trove of declassified material at the National Archives in College Park, Md., combined with exclusive interviews with former intelligence officials, reveal new details about the depth of the United States’ knowledge of how and when Iraq employed the deadly agents. They show that senior U.S. officials were being regularly informed about the scale of the nerve gas attacks. They are tantamount to an official American admission of complicity in some of the most gruesome chemical weapons attacks ever launched.

Top CIA officials, including the Director of Central Intelligence William J. Casey, a close friend of President Ronald Reagan, were told about the location of Iraqi chemical weapons assembly plants; that Iraq was desperately trying to make enough mustard agent to keep up with frontline demand from its forces; that Iraq was about to buy equipment from Italy to help speed up production of chemical-packed artillery rounds and bombs; and that Iraq could also use nerve agents on Iranian troops and possibly civilians.”

Moving the clock forward to 2005, Republican presidential candidate Ron Paul, not his son “Rand,” read a Wikileaks State Department cable into the congressional record that revealed that the Iraqi invasion of Kuwait in 1990 was done upon authorization by then President George H.W. Bush.

For more historical context, consider this plan and we will explain more of it in a minute, was interfered with by the 8 year Clinton presidency. However, there were efforts to remove Clinton from office through impeachment, perhaps now we will know why.

Some wonder why Bush(43) and his cohorts led by Britain’s Tony Blair, would violate nearly every imaginable international law in order to take over Iraq. Statements made by General Wesley Clark who outlines how he learned of the Bush policy to seize the entire region, beginning with Iraq and then a quick war wiping out Iran, give needed context.

So, it all begins with American prisoners, in the heady times of 1979, the Grand Ayatollah mysteriously flown from Paris to Tehran, almost like Lenin’s closed boxcar ride from Switzerland to St. Petersburg some decades before, all perhaps due to some invisible hand it would seem.

Today we have three American crew, delivered onto Iran to embarrass an American president who sponsored a treaty with Iran.

We have an America enraged seeing its military humiliated, no questions asked as to why the impossible would happen “thrice,” not a word about it. But what we do have is America’s history of playing Iran, knowing how much Iran loves to play to the local audience and how easily Iran may forget the past as so many others do as well. Study of religion and study of history seldom go together very well.

Did Iran know that Georg H.W. Bush, through a family business, made millions supplying poison gas to Saddam? When they cut the deal for the Hawk and TOW missiles to be supplied by Israel and Ollie North, did they know America was going to try to crush them using the WMD’s and Saddam’s army?

Did they know America would out Saddam, not for his WMD’s supplied to him by the Bush family, but for his failure to bring down Iran. That was his sin.

Now history may be repeating itself again, an eight year interval like with Clinton, eight years of Obama with no military threat against Iran whatsoever. For eight years, every attempt was made to oust Obama, threats of military coup, assassination, endless impeachment threats and even a threat of exposing his Kenyan birth, something believed by only the least discerning.

Is history repeating itself, was Iran offered another deal that will backfire, leading to Ted Cruz, Jeb Bush or some other half-baked bellicose maniac who has dream of conquering the Persian Empire in its latest incarnation?

If the odds of three American patrol boats getting lost in the Persian Gulf and captured by Iranian Revolutionary Guards is as odds makers would put it, about 50 billion to 1, then we may well have a “January Surprise” underway.

Can Iran look forward to, should we be right, of being betrayed? What do you think?