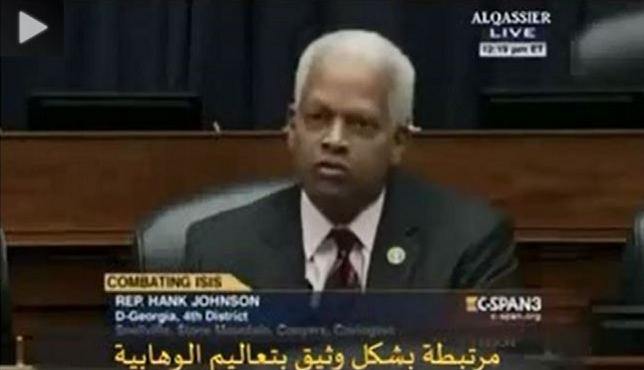 Editor’s note: Watch Ambassador Ford do everything possible to avoid telling the truth.  At several points, Ford actually dissembles.  The problem is, Ford is considered a “better” US diplomat.  This should make you sick.

In a debate about dealing with radicalism, Democratic Congressman Hank Johnson spoke on the need to address the internal political factors that contribute to Islamic extremism.

He said that the global Jihadi movement is closely related to the teachings of Wahhabism and that al-Qaeda and ISIS are the offshoots of Wahhabism.

He went on saying that Wahhabism is an 18th century offshoot of Sunni Islam which began in the land that has come to be known as Saudi Arabia.

“Congressman Johnson pointed out that Wahhabism is the state-sponsored religion of Saudi Arabia and the Saudi ruling monarchy promotes Wahhabism through official state-sponsored mosques and through religious schools called madrasas all over the world, adding that it funds such schools or madrasas by the country’s revenues of gas and oil.“

He concluded that Wahhabism ideology lines up with the ideology of the so-called Islamic State  (ISIS, ISIL, IS) at the beginning and the terrorist group has taken it to further steps later.

Michael Morell, Former Deputy and Acting CIA Director, said that there should be a discussion with the Saudi government about their support for Wahhabism and how it should be treated.