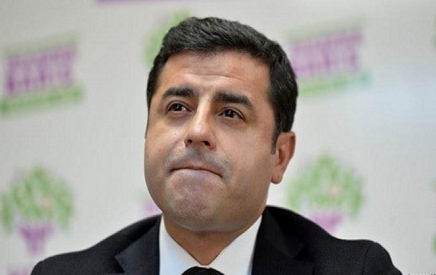 ERBIL, Kurdistan Region – The Turkish government must stop killing civilians in the name of fighting terror, the leader of the pro-Kurdish People’s Democratic Party (HDP) warned Sunday, calling for an end to all hostilities with the Kurds in Turkey and Syria and urging dialogue to end the tensions and military crackdowns.

“The AKP regime attempts to eliminate the Kurdish resistance,” said Demirtas, blasting a party whose leaders have imposed curfews in the Kurdish areas of the country since August 16.

“Let dialogue and negotiation replace violence and crackdowns of the Turkish state” on the innocent people, he added.

Warning of the risk of the Turkish army’s ongoing military operations in the predominantly Kurdish areas, Demirtas said: “It has been 53 days since there have been tough curfews and army crackdowns on civilians.” He added that people are “suffering from lack of water and public services due to the clashes.”

Demirtas said military campaigns by the Turkish armed forces are targeting everyone.

Demirtas said that, without feeling shame, “the prime minister said they were searching home by home to cleanse these areas from the terrorists.” He was referring to earlier remarks by Turkish Prime Minister Ahmet Davutolgu.

“Even ambulances are not allowed to enter the conflicting districts, town and cities to transfer the wounded people to the hospital,” Demirtas said, blaming the government.

Demirtas warned that they have the ability to repulse the government, but they want to prevent the breakout of a Kurdish-Turkish conflict.

“We are capable to repulse, but we do not do that, because the blood will be spilled, and that will lead to the ignition of Kurdish-Turkish conflict,” Demirtas said. “We are rationally working, unlike them.”

Reiterating a call for peace, Demirtas called on all parties to “get together, put the differences aside and start negotiations.”

If Turkey’s politics is to “fully arm itself against the will of the people, it will be a big problem for them, and they won´t be able to get rid of it and even history will not forget it.”

The Kurdish leader attacked the Turkish state for hostility against the Kurds in Syria.

The Middle East is in a turmoil that will “reach Turkey one day, if they do not give up hostilities against the Kurds in Syria,” he warned.

“Let them (Turkish government) know,” Demirtas explained. “They are supporting the cleansing of our brothers in Syria. We never accept that.”

If you want to fence the borders with bombs, you cannot do it with the hearts, and you can break up or relations, let them learn from the history we shared with each other.”

Recent reports indicate that ongoing clashes between the Turkish army and residents of Turkey’s southeastern Kurdish cities have displaced hundreds of thousands of civilians and led to the deaths of hundreds.

The Turkish army declared a series of military curfews in several neighborhoods of the Kurdish district of Sur in Turkey’s Diyarbakir province in early December. Since then, clashes have been underway, with dozens of civilians and policemen reportedly killed and wounded.

Turkish media reports say that more than 100 people are believed to have been killed and 100,000 others displaced since late July, when Ankara and the outlawed Kurdistan Workers’ Party (PKK) resumed fighting, shattering a fragile peace process that was meant to end a three-decade war in which 40,000 people have died.