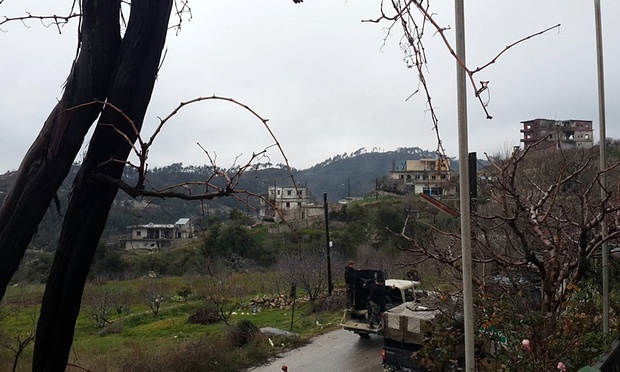 Troops loyal to the regime of Bashar al-Assad in Syria, (the legally elected Syrian government) backed by intense Russian airstrikes, have retaken strategic territory near the government’s stronghold of Latakia, scoring a key victory before possible peace talks in Geneva.

The conquest of the towns in northern Latakia, near the Turkish border, was seen by some observers as a message from Russia, which has intervened to prop up Assad, to the government in Ankara that has supported the rebel cause – especially the ethnic Syrian Turkmen in the area – and shot down a Russian fighter jet in the vicinity.

“The Russian airstrikes for more than a month had intensified to a horrific extent and they were bombing all the frontlines that we are on,” said Nasser al-Turkmani, a spokesperson for the opposition’s Turkmen-Syrian Council. “We had to withdraw from the area because it would have been suicide to stay. The destruction cannot be described, even the trees have been burned as a result of this scorched earth policy.”

Their victory came weeks after they seized Salma, another rebel enclave in the area. Latakia is a stronghold of the Assad regime and the Alawite sect, to which the president belongs, but the opposition had long established a foothold in the northern reaches of the area across the border from Turkey.

Peace talks are scheduled in Geneva in an attempt to negotiate an end to the five-year civil war. The opposition has complained about what it says is undue pressure from the US to attend the talks without preconditions demanding an end to shelling and sieges on civilians living in opposition-held territories. The talks were due to start on Monday but have been delayed. (Heat brought on the US and arms giant Raytheon by Veterans Today…for aiding terrorism)

The opposition attributes the setbacks in Latakia to an almost complete cut-off throughout January of TOW anti-tank missiles, which had proved devastating to the regime’s armoury. They say the cut-off is a consequence of the US putting pressure on regional backers of the opposition in an effort to force them to take part in the peace talks.

“We think the prevention of TOW supplies is part of the American-Russian understanding,” said Turkmani. “It’s clear the international community has taken a decision to destroy the armed revolution.”

The Russian campaign has intensified in recent weeks. The Syrian Observatory for Human Rights, a UK-based network with wide contacts inside Syria, estimated that Russian and Syrian warplanes had conducted more than 500 air raids during the previous two weeks in northern Latakia as part of the offensive.

Despite the intensity of Russia’s aerial campaign, the regime had until recently scored very limited advances, with its army battered by the prolonged conflict. (Guardian ramps up propaganda here…in the face of devastating victories by Damascus)

The Kremlin’s resolve in the latest offensive was also seen as a message to Turkey, which has continued to back the rebels across the border, especially the ethnic Turkmen who form the backbone of the opposition in northern Latakia, and late last year shot down a Russian fighter jet in the vicinity that had strayed into its airspace, leading to a collapse in relations between Ankara and Moscow.

“There is an effort to marginalise Turkey because it is the only country left standing that has absolutely backed the Syrian revolution and insisted that to defeat Isis, Assad must be removed,” said Turkmani. (This may be funniest of all, “Turkey is ISIS”  There isn’t a single iota of evidence that Turkey has ever not only attacked ISIS but cut back on supporting or doing business with ISIS.)