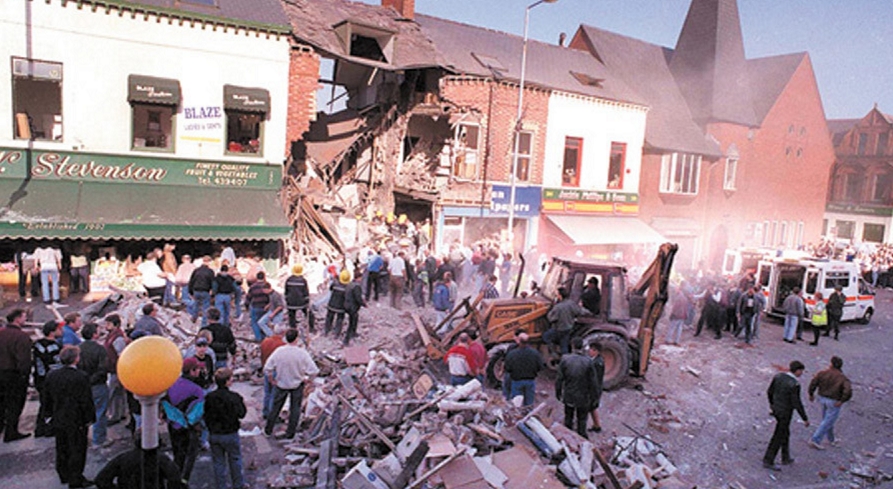 Aftermath of the Shankill Road Bombing
Northern Ireland’s police watchdog is investigating allegations that the IRA operative who planned the 1993 Shankhill Road bombing was an MI5 informant who gave intelligence that could have helped security forces stop the atrocity.

Nine civilians, including two children, were killed in the attack on a fish shop in Belfast’s loyalist heartland in 1993. The bombing became one of the most notorious atrocities of The Troubles, prompting a wave of sectarian revenge murders in its wake.

Some 23 years after the attack, allegations have surfaced that sensitive documents stolen by the Irish Republican Army in a 2002 raid on the Royal Ulster Constabulary (RUC) headquarters in Castlereagh show that the terrorist who planned the bombing was a British intelligence agent codenamed “AA.”

Excerpts of the stolen files indicate that AA had extensively briefed his Special Branch or MI5 handlers on the objective and timing of the bombing, which had been designed to stoke sectarian anger by murdering the leader of loyalist terror group the Ulster Defense Association (UDA).

UDA chiefs had planned to meet above the fish shop on the day of the attack, but postponed at short notice. Although they escaped the blast unharmed, it killed Protestant shoppers and one of the bombers, IRA member Thomas Begley.

The initial plan had been to light a fuse just long enough for civilians to be evacuated from the site and for the bombers, who were disguised as delivery men, to flee. But the bomb exploded as Begley approached the shop’s counter amid a group of customers.

The allegations concerning AA, which were first reported by the Belfast-based newspaper Irish News, raise the question of precisely what British intelligence officers knew in the run-up to the atrocity.

Observers suggest UK intelligence officers either allowed a botched bombing of civilians to play out or failed to intervene quickly enough to stop the atrocity.

The police ombudsman for Northern Ireland, Dr Michael Maguire, has confirmed he is examining the allegation.

“We have received a complaint. It centers on two concerns: Did the RUC have information which would have allowed them to prevent the bombing and was the subsequent investigation compromised; [and] did the police ‘fail to deliver justice to the families of those who lost their lives in the bombing?’” he said.

“We will seek to establish if this is something we should investigate, and if so, when we could begin this work.”

The police ombudsman’s inquiry began after relative of one of the Shankill Road bombing’s victims approached the watchdog, asking about AA.

The Castlereagh documents are believed to reveal that AA was passing information back to his handlers on details of the IRA plot to target senior UDA members, including the location and date of the bombing.

The documents stolen by the IRA in its raid on the RUC Castlereagh offices gave the codenames of British agents inside Republican terrorist groups, and a year later the IRA “stood down” one of its operatives, which it identified as AA after comparing the RUC documents with its own intelligence.

Investigators examining the case will look to ascertain whether information from the British agent could have been given to the UDA leadership to make sure their meeting was rescheduled and whether there is evidence to show British intelligence operatives allowed the attack to go ahead to protect AA as their source.

Relatives of the bombing’s victims have called for a full investigation.

Charlie Butler, who lost three relatives in the Shankill Road bombing, said he and other families would be “devastated” if the allegations are accurate.

“Collusion is not a nice word for anyone but when it is collusion with innocent people losing their lives to protect someone else there has to be a line drawn to say that is wrong,” he told BBC News.

“[The security forces] were there to do a job, to protect people. If they knew about [the bombing] then they should pay.”

The claims are the latest in a long line of allegations of collusion between terror groups and security forces on both sides of The Troubles.

In addition to the case involving AA, Northern Ireland’s police watchdog is investigating murders in the 1980s and 1990s of at least 20 alleged IRA informers whose family members believe they were used as scapegoats to cover the tracks of the security forces’ prominent IRA agents.