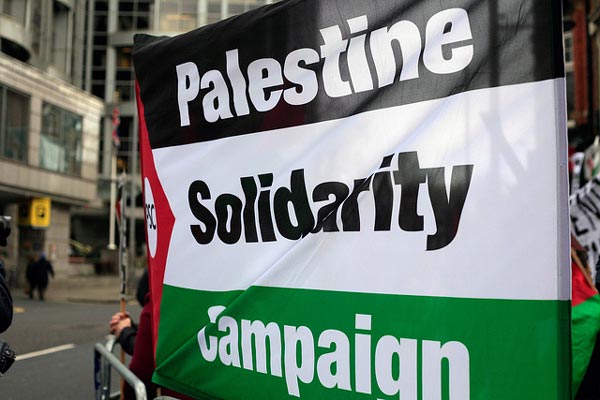 At its Annual General Meeting last weekend the Palestine Solidarity Campaign (PSC) threw out a proposal to seek Israel’s expulsion from the United Nations.

Chairman Hugh Lanning is reported to have kicked off proceedings on a positive note saying: “Let us recommit to Palestine to make sure that we make a difference in the coming year.”

But the mask slipped when a motion was put for the PSC’s Executive Committee to “request the Government of the United Kingdom, enforced by a petition and lobbying, to submit a motion to the Security Council recommending that the General Assembly expel Israel from the UN in compliance with the UN Charter, Article 6.”

The motion failed — 76 in favour, 116 against. A statement by its main sponsor, Blake Alcott, says that an identical motion to the AGM a year ago was likewise opposed by the PSC leadership who felt “the time is not yet right”. His reaction to this latest rejection was to say: “Pro-Palestinians must wonder how much worse Israel’s crimes must be before the international community takes disciplinary action.”

There is ample reason for calling for Israel’s expulsion from the UN. It chimes very well with the ‘Sanctions’ element of Boycott, Divestment and Sanctions (BDS). And it is a good fit with the sort of measures that, in the ‘Call to Action’ by the BDS Movement, should be maintained until Israel meets its obligation to recognize the Palestinian people’s inalienable right to self-determination and fully complies with the precepts of international law by:

Israel clearly isn’t the ‘peace-loving state’ required by UN Charter Article 4. Nor has it fulfilled the four conditions put on its acceptance as a member back in May 1949. As the record shows, Israel has wilfully breached conditions of membership for decades. Many have argued it automatically disqualifies itself by failing to fulfill membership requirements in the first place. Furthermore it continues to show contempt for numerous UN resolution despite frequent reminders.

When considering an appropriate response for civil society to make, suspension sounds ‘softer’ than expulsion as membership can be speedily restored if and when Israel satisfies the other member states that it now conforms. And in the circumstances suspension would surely be more difficult to veto.

(Article 6) A Member of the United Nations which has persistently violated the Principles contained in the present Charter may be expelled from the Organization by the General Assembly upon the recommendation of the Security Council.

It might be argued that the passing of numerous UN Security Council resolutions amounts to ‘preventive action’ (although still awaiting ‘enforcement’). But Article 6, which stipulates expulsion, is more clear-cut. Israel has certainly violated every norm, every rule of decency, every principle of humanity in the book. And it continues to do so without showing a shred of remorse.

Too timid to put down a marker for upholding international law?

Of course Mr Alcott’s motion, if passed, would have been brushed off by the British Government which is pledged by Cameron to protect and reward Israel right or wrong. But that is not the point. The aim of the motion was to put down a marker and provide a focus around which other campaign groups across the world could mobilise, bringing similar pressure to bear on their own governments and creating an irresistible swell of global opinion to ensure international law is eventually upheld.

Where does the PSC go from here, after failing a simple test? How will it now “make a difference” on behalf of the long-suffering Palestinians? The PSC’s media people have been asked twice for comment and further information but are “too busy”.

Right now some 71 UK doctors are pressuring the WMA to revoke the membership of the Israel Medical Association over claims that its doctors perform medical torture on Palestinian patients. According to Press TV/Al Ray, if the British physicians succeed, the Tel Aviv regime will be banned from taking part in international medical conferences and publishing in journals. Evidently our doctors have the balls for firm action, so why not the PSC?

Meanwhile ace propagandist and chief spokesman for the terror regime in Tel Aviv, Mark Regev, is due to take up his appointment as Israel’s ambassador to the UK later this year. His presence here will have special significance. If the PSC and the impotent Palestine Mission in London are the best he’ll come up against, we can expect a media communications massacre.