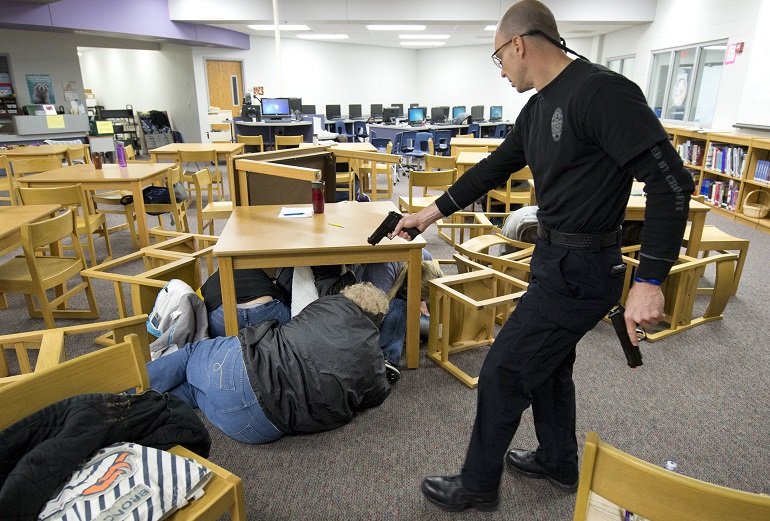 Atlanta has a new Association of Former Intelligence Officers chapter, to replace a former one whose old school members died off, a group of close friends who kept it that way to the end. The city has a large intelligence and security community, so we had a suitable pool to rebuild from. I thought I would give VT readers a peek inside today’s meeting.

AFIO is a broad-based support organization for the intelligence community, which is quite diverse with its specialties and departments, both governmental, outside contractors, academics, etc. And like the Intel community itself, even supporters have their niche interests.

This afternoon’s meeting featured the Atlanta FBI’s supervising agent, Daniel Morrison, who gave us an interesting review of his career during a time of evolutionary changes, where he was in the middle of the old becoming the new.

This process sped up particularly after 9-11, with the breaking down of the firewalls that had limited inter-agency cooperation in critical areas, some of it due to legal restrictions on foreign versus domestic intelligence gathering.

The community has come a long way in things like joint task force work, and then the more delicate area of Intel sharing with allies, which has had its ups and downs. As with any large organization, individual trust and personalities can determine what does and does not get done sometimes, and for good or bad results.

The main feature of Dan’s visit was the half-hour FBI’s The Coming Storm “active shooter” training video for first responders. At first blush, it seemed over-produced, as the format was a docu-drama of sorts. But then I understood that there was no way that Hollywood could do a bare bones production for a large government agency. And it is fair to say, the drama part served a motivational purpose.

The training focus was not a tactical one, as all first responders have been deluged with that kind of training for years. This film was made to demonstrate the complexity of active shooter tragedies for situations like school shootings, with large numbers of people involved. Everyone involved needs to be aware that good teamwork, preparation, flexibility and speed are not a luxury.

Most communities do not have a department or agency has the resources to cope with with a high casualty terror attack, and when multiple departments descend upon the scene, a tragedy of confusion can easily add to the one that just happened without extensive training on all levels.

For example, when a handful of local cops and sheriff’s deputies are first on the scene, an issue can arise if they have been trained to clear rooms differently. Will they have radio communication with each other?

This problem has been somewhat solved in larger communities, with lots of joint-agency training. Common tactics are agreed upon, and commanders get to know each other beforehand, as strangers do not make good first responder teams.

It is a shame the FBI has not put this online, as the complexity is more that the average citizen can imagine. Added to that is the pressure that correct decisions must be made quickly to save lives. Wounded victims have to be ignored by officers hunting an active shooter because, once found, 63% of the shooters kill themselves, ending the killing spree.

Lesser known is that businesses are having to engage consultants to have a “plan” ready that can save lives if their number comes up for these Rambo-shooter situations.

The short trailer above was all I could find for a video. I spared you the Fox News longer version. But if you look around YouTube, a lot of colleges and communities have produced “What to Do” training videos for particular audiences. I would advise everybody to put a few moments in watching these to learn some of the basics on surviving an incident; especially if caught in a room alone or with a group… how to organize to save yourselves.

Some of these shooting events have been controversial, and information management has gotten worse with the new lockdown strategy on releasing no information on the investigation in progress — a public relations nightmare. But for those responders who show up in the middle of one of these tragedies, that is the last thing on their minds.

During the 1970s the Intelligence Community was buffeted by a number of leaks and revelations, culminating in the Church and Pike Congressional investigations. CIA officer David Atlee Phillips took early retirement in 1975 to respond to the growing sentiment that the CIA was a “rogue elephant.” As part of this effort, Phillips founded this organization, known then as the Association of Retired Intelligence Officers (ARIO).

Although much attacked at the time when many people called for the dismantlement of the CIA, Phillips toured the world to speak out in favor of the need for a strong intelligence community. He was subsequently personally accused of being a participant in the Kennedy and Letelier assassinations. He successfully sued several publications for libel, retractions were issued and monetary damages awarded.

Phillips donated some of these proceeds to ARIO for the purpose of creating a legal defense fund for American intelligence officers who felt they were the victims of libel. This defense focus was later moved to a separate group called Charter, which disbanded in the early 1980s, and AFIO’s focus narrowed to public education within its 501(c)3 charter.

The first ARIO convention was held in September 1975, and the organization defined its purpose to explain to the nation the function of intelligence and what intelligence officers can and cannot do. From the very beginning it sought to reach out to teachers and students across the country as well as to the media, through publications, such as Periscope and through periodic luncheons.

These early efforts have grown into the robust academic outreach and support programs present today, including scholarships, civic outreach, a variety of print and online publications and media fora, an annual symposium as well as the quarterly luncheons featuring senior officials from the Intelligence and Policy Communities, authors and media representatives.

In 1978 the name of the organization was changed to Association of Former Intelligence Officers to reflect a pool of members who were not necessarily retired, which widened the pool of eligible members and reflects the current dynamic membership. From its inception in Dave Phillips’ living room and a few hundred members in 1975, AFIO has grown to over 5000 members, with 24 active chapters across the United States.

Our mission is to build a public constituency for a sound, healthy and capable U.S. intelligence system. Our focus on education fosters an understanding of the important role of intelligence in National Security and nurtures interest by students in careers in the many fields used by U.S. Intelligence Agencies. This includes the role of supporting intelligence activities in U.S. policy, diplomacy, strategy, security and defense.

In addition, AFIO focuses on understanding the critical need for effective counterintelligence and security against foreign, political, technological or economic espionage, as well as covert, clandestine and overt counter-terrorist or criminal operations threatening US security, the national infrastructure or corporate and individual safety.