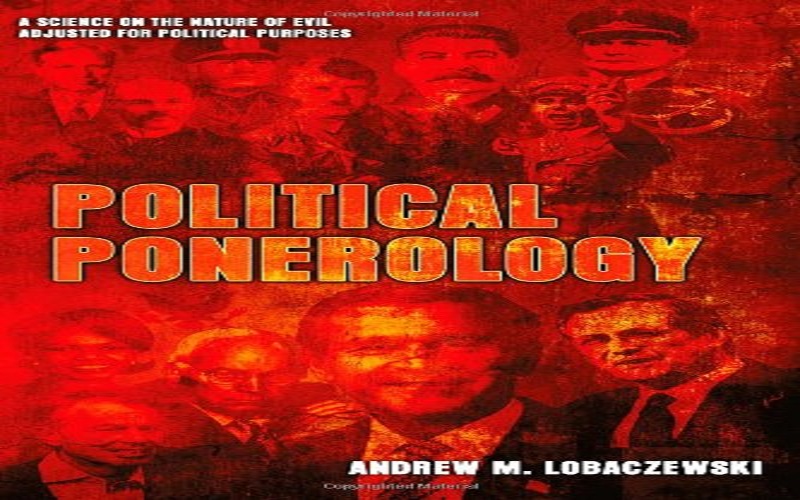 After I wrote the article, Where Does Evil Come From? a friend put me onto Ponerology. (Thanks KT very grateful.)

Editor’s note:  Consider this a survival guide to understand, not only the upcoming presidential election but the general function of government itself.  Stars among the list of characteropaths would be Adelson and Koch, the Kagen/Noodleman klan and all those associated with the Institute for the Study of War, the American Enterprise Institute, the Jamestown and Heritage Foundations and “PJ Media,” always a favorite.g

In “Where Does Evil Come From”, I explored how trauma results in evil behaviour, in this case cannibalism, and how, in my opinion, the people of Jamestown should have been returned to England and put into a place of safety where they would no longer be a danger to themselves and to others.

Instead they were returned to the trading outpost and integrated with the new settlers. Their psychopathic behaviour became “normalized” and integrated into their life view and was passed on down through generations as a cultural trait, resulting today in the human sacrifice rituals as we see at Bohemian Grove, the Zombie fetish and in the film industry such as “ The Hunger Games.” Another example is “Twin Peaks.”

In Political Ponerology, Andrew M. Lobaczewski explores two types of evil, characteropathy and psychopathy, both of which result in a lack of empathy.

The latter he describes as people born with a genetic lack of empathy and an inability to feel real emotion. Any emotion they display has been copied, and they repeat the facial expressions and body movements of others like actors on a stage. The psycopath is the hidden hand behind the characteropath and identifies and uses them to achieve their goals. Of the former he says:

“Those without brain tissue damage often develop paranoid characteristics as a result of psychological induction by a paranoid characteropath. A terror-filled upbringing gives rise to rigid and stereotyped thinking, and makes it hard for such an individual to develop a healthy world-view.”

The traumatized people of Jamestown were reduced to cannibalism, and these behaviour traits were passed on down through generations and became a generational/cultural world-view. One only has to think of Skull and Bones to get the picture.

“Such ruthless and egotistic beliefs traumatize and spellbind normal people, diminishing their ability for common sense. Some even come to view frontal characteropaths as having special powers.

If a parent possesses this disorder, all their children will usually show evidence of this fact in their personalities. Lobaczewski characterizes Joseph Stalin as typifying such a characteropath.

A typical description of an extreme case may include the following: brutal, charismatic, snake-charming, issuing of irrevocable decisions, inhuman ruthlessness, pathological revengefulness, an egotistical belief in their own genius.”

One only has to think of the 100 million who died as a result of Stalin’s political policies to get the point, to be followed by more millions who died during Hitler’s rise to power and World War 2.

He then goes on to explore the detrimental use of drugs.

Consider the full implications of Big Pharma that only has profits as a motivation, as opposed to real health care. Companies like Monsanto who use poisonous Round-up Ready as a pesticide, which causes cancer. Compulsory vaccines that often result in the very disease they were supposed to prevent. Then factor into this equation the narcotics industry and the prolific use of addictive substances, the cocaine and heroin industry.

“Character anomalies developing as a result of brain-tissue damage [from medications] behave like insidious ponerogenic factors. … their influence easily anchors in human minds, traumatizing our psyches, impoverishing and deforming our thoughts and feelings, and limiting individuals’ and societies’ ability to use common sense and to read a psychological or moral situation accurately. This opens the door to the influence of other pathological characters who most frequently carry some inherited psychological deviations.” (Lobaczewski, 119-120)

With the rise of modern medicine came the use of little-understood drugs which leave permanent damage to the nervous system. Some tumor treatments (i.e., cytostatic drugs) often attack the more primitive portions of the brain, leaving such individuals emotionally dull, unable to empathize. While retaining their intelligence, they become vengeful and praise-craving egocentrics, indifferent to the pain they cause others.

Certain viruses (e.g., mumps, diphtheria, polio) and toxins like heavy metals, pesticides, food additives and household chemicals can have similar effects. Such individuals are usually psychologically naive and unable to comprehend the crux of a matter.”

Western society and culture incorporates all these factors, from those traumatized in wars and false flag attacks, to the abuse found in detention centres and black sites and lastly to the drug culture in health care, food and entertainment. What is inherently not part of normal human behaviour has been inculcated over the last 70 years into a cultural norm, where empathy has become a rare commodity. In other words the west is a ponerological society.

In Lobaczewski’s view “Inherited and acquired psychological disorders and ignorance of their existence and nature are the primal causes of evil.”

The Khazars for example, and their influence on eastern Europe, later western Europe and the world, and our ignorance of their existence, as well as similar personalities in other cultures would in his estimation be a primal cause of evil. He goes on to stress:

“The scope of evil does not respect any boundaries of race, doctrine, or ideology. All races carry the genes, and all schools of thought are susceptible to their influence. These pathological factors that influence behaviour form a complex web. It is only in such a web that the “environmental evil” wherein circumstances can influence a normal person to commit harmful acts can be understood. …

The ultimate cause of evil lies in the interaction of two human factors: 1) normal human ignorance and weakness and 2) the existence and action of a statistically small (4-8% of the general population) but extremely active group of psychologically deviant individuals. The ignorance of the existence of such psychological differences is the first criterion of ponerogenesis. That is, such ignorance creates an opening whereby such individuals can act undetected.”

One point he stresses is the psychopathic trait of wearing masks, appearing to be what they are not. A pertinent example he gives is the very nature of the CIA:

Also, compare the public humanitarian front of the Anti-Defamation League, with its sordid history of illegal domestic surveillance, character assassination, and collaboration with foreign spy organizations.”

In Lobaczewski’s view, evil has two elements. The born psychopath who is incapable of experiencing any real emotion nor the experience of empathy for others, and the characteropath who becomes evil either through trauma, illness, environmental illness, nurture or brain damage.

Evil is not some unidentifiable “other” with horns. Evil is very human, and its human characteristic is to lie. Its nature is to pervert others in order that this minority group not only rules but influences those around them to adopt their emotionally devoid and socially irresponsible world view.

What is imperative in this process is that humanity realizes that in culture, in social structures, in arts, entertainment, politics and commerce, we have through their influence been infected like a virus, where abhorrent behaviour has been inculcated. The unacceptable has become acceptable.

The first step would be to detoxify ourselves. Kick the habit. Be more aware of what we read, what we watch and what we expose ourselves to with a full understanding of the influence it has on us and our behaviour.

The “judgement” is that the behaviour we have been infected with is destructive.

The “do not judge others” is in recognizing that there is an illness which has effected most of us and in our empathy share this knowledge so that we can work towards healing ourselves and others.

The conclusion is to start cleaning out the system.

A tally of the millions who have suffered in the last 100 years alone should be a screaming siren that empathy is in danger of becoming extinct. And more than ever we need those famous words : Love one another as I have loved you.

Where Does Evil Come From?